Life continues and I learn more 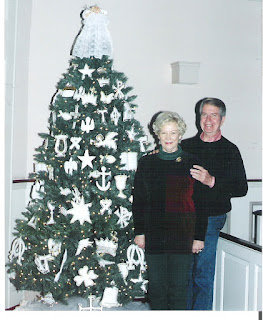 Shirl made a complete set of Christmons. (I had never even heard of them) but evidently they are big in some churches. This is Shirl and hubby Jim with a display at Charlotte's Commonwealth Methodist Church.
A joke:
Women are suspicious at times.
In the beginning even, Adam stayed out late some nights and enjoyed quiet alone. But that made Eve upset.
“You’re running around with other women,” she told her mate.
“Eve, honey, you’re being unreasonable,” Adam responded. “You know you’re the only woman on earth.”
The quarrel continued until Adam fell asleep only to be awakened by a strange pain in the chest. It was his darling Eve poking him rather vigorously about the torso.
“What do you think you’re doing?” Adam demanded.
“Counting your ribs!” said Eve.
- - - - - - - - - - - - - - - -
It might be corny, but I laughed at that one.

Now  incidents of life. I depend on my ‘contacts’ to address my e-mails. i.e. at the address line I start the name ‘be’ for Ben and his e-mail address pops up. Imagine my surprise when I typed ‘BE’ and nothing happened. I tried again. Nada.  I clicked on contacts and received the message: ‘There are no contacts in your address book’.
I tried to recover  the list and had no success. So I started the old fashioned way, adding one at a time as I received or sent e-mails.

In the back yard:

I did a no-no yesterday in our back yard, I burned 8 worn wicker chairs. One reason, on our daily walks we pass a pile of wicker the city has ignored on the side of the street, so I figured a faster way to get rid of them. (OUCH)

In the house:
I have mentioned we are behind a home I built for us a few years ago (22 yrs. I think). We loved this house but decided to sell when we moved into the motorhome. We turned it over to a realtor and it did not sell. It is 2800 feet including the basement BUT I built for us and it is only two bedrooms. While taking care of Shirl I noticed some loud squeaks have developed under the carpet. So I am working to stop those.
Out of the blue:
Yesterday evening we were visited by Jack Fulbright, we are not kin but I am kin to people he is kin to.  It is not as complicated as that old song, “I’m my own grandpa.”
Jack is a great musician. He played some for us on the piano. I knew him as a sax player, but he plays many instruments.  He was curious about our plans for Shirl’s music books and sheet music.
I had looked thru the music and most of it was dated so our grands would not be interested. We are intrigued with the many stories of sister Shirl. Jack added a few.  She was indeed unique. She lived out one of her dreams, she did sing professionally locally and was very well received.  All the band members have praised her to high heavens.

Its neat that you had the visit with Jack and he shared stories of Shirl. Helps to keep her memory alive and to learn more about that very special sister of yours. I laughed at the Adam and Eve joke myself. Did you get caught for burning the wicker chairs and in trouble with the "law?"


That's a GREAT joke! (Now, let's see if I can remember it!)
We inherited a burn barrel in the back yard that Tom's begun to use. First time I was skeered to pieces the law was going to show up. That, and I didn't have a fire extinguisher.

Pretty neat about your friend Jack showing up. I know my Tom would enjoy looking through Shirl's music books, too. He still plays both the sax and keyboards; even the accordion (long-ago). Prompted by Sean of the South's column, we were just talking and remembering Myron Floren!

Busy days do continue for you and I image they will for quite awhile. It takes a lot of living to make a house a home for sure.

A house that size would be perfect for me and Nick! Ha!!
We have a squeak in our floor. Nick said its there for security purposes so no one can sneak in on us. :)

LOL...corny yes, but it did take me a minute and I laughed at that joke!

I recognized the Christmons right away...it was my confirmation class that made a tree full of them for our church. So cool you have a nice picture of them and another fond memory of Shirl, sweet Shirl.
I got the joke...funny stuff. Eve did it......lol Soooo, do you need a burning permit in your town to burn things not in a burning barrel? Just wondering. I love a squeak in the floor boards ~ an indication of a well used floor. Nice to share stories with friends., and sheet music with another musician. You are so kind. Your house would be a great home base, just thinking out loud.
loven'hugs from hot, hot, humid up north

Hi Jack,
Checked out your blog again today to see what is going on, and I am sorry to hear the news of your sister, but delighted to read the stories that you are sharing. Your sister was clearly a very special person and was lucky to have you as a brother.
Bonita

funny joke. wonderful memories of your sister. glad you didn't get in trouble for burning the chairs.

I have been sent here by Mevely. She told me a story you told her about people visiting your motor home to use the toilet. I write humourous stories on my Blog; and your story would make a good comic tale.

I have lost so many contacts through computer crashes and my own stupid mistakes. Fortunately, I recover most of them using the same technique as you. Good read Jackster ans say hello to the Missus!

I have been in Ohio visiting my other family so I have not been able to comment, but I am back.
Oh my gosh I did the same thing with my contacts awhile ago - it makes your heart sink. I have made an email list now of every one!!!
So are you keeping the house now?
Jack - you burnt the chairs????
Sandie