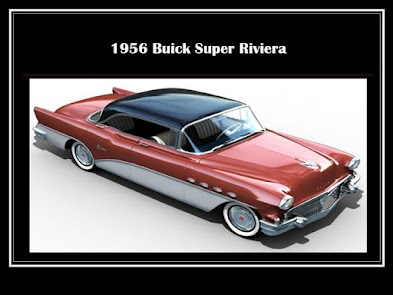 I did join the Corps when this cr was new, 1956 Buick. (Remember Rose, a blogger? She sent me this picture the year she passed! I miss her along with some others we have known.)

In the past few days I have been reminded of how much of a kid I was at 16, BUT thought I was grown.  I see policemen today and think, “They allow that kid to carry a dangerous weapon?” Some of them look they should still be in High School.

So I was thinking of my first encounter with State Level Law Enforcement.

Sherry owned a portable typewriter. I needed a birth certificate showing I was 18 years old. I was 16 at the time. I was planning to join the USMC and did not want to wait the two years.

I went to the courthouse and bought a copy of my birth certificate; fifty cents. I took a typewriter eraser and erased the last digit of the year. Using a sharp green colored pencil I re-established the background on the certificate. Sherry helped me align the typewriter so the digit hit correctly, you only get one chance. It came out perfect. I was now born in 1937 vs 1939.

(I think that made her an accomplice.)

To hide the deed even further I wadded the certificate up and stepped on it. Then I flattened it out and headed for the print shop where I spent a dollar to have a glossy copy made.

The recruiter bought it. I took the tests, got the shots and had the physical. I was given a bus ticket to Raleigh, NC to be sworn in.

The swearing in did not go so well. After asking me if I was in fact 18 several times, the Lt. said, There is an SBI Agent (State Bureau of Investigation) waiting to see you.

The badge looked as big as the man. As he held it for me to see, he said, “Darnell you are in trouble. You have committed  felonies and a misdemeanor or two. Forgery and Perjury will get you jail time, you understand that?” (There was no Miranda Act then)

I said yes and admitted everything.

I am sure he enjoyed himself. In the end he said the USMC would like to have me. If I returned as soon as I was old enough, there would be no charges.

I returned home, again at the expense of the Government, but with my tail between my legs… (I did return with parent’s permission the day I was 17.) 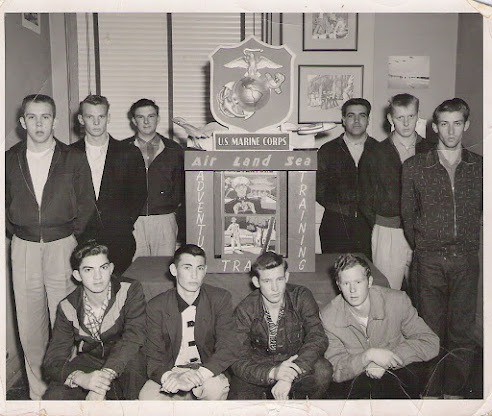 The second time worked. that is me second from the right front row.

Good thing you were caught! Can you imagine always then having to be 2 years older than you actually were?

I’m not sure to find you as a rebel or as a very dedicated person wanting to serve our country. I’m sure they pictured you as a good ol boy. And yes Sherry was an accomplice!

That sounds like a lot of stuff young boys would try. My brother signed our mother's name so he could join the Marines, at seventeen. Then he would go awol to come home a couple times...mommy would have to raise money to send him back to camp. Our big brother George says, Charles was the reason velcro was invented, to rip those stripes off faster. LOL You seem to be a patriotic man to me. I had two brothers in the Army and two in the Marines. Blessings, Semper Fi, xoxo, Susie

In New York the legal drinking age was 18, I took my "Original" birth record, scrubbed out the birth date and typed over it to age me 2 years, not a good job, didn't work !!! Later when I needed my record of Birth I had to go get a "Copy" !
Things we do to get what we want !
Take care, Love from wet, rainy New York State, Gary an Anna Mae

oh my oh my, you were so fortunate! Somehow, you don't strike me as the one to be so brazen. I'm glad you straightened up........and to make Sherry an accomplice. It is so true tho, that you are a most dedicated patriot and I cannot thank you enough. Mr, you sure went thru a lot of trouble tho. Glad they took you in eventually, and legally. lol
loven'hugs from up north where it's raining again. The creek is near overflow for the umpteenth time this year.

Well, your title's sure an attention-getter! I'm over here cracking up at your and Sherry's brush with the law. Mostly impressed by your ingenuity with the green pencil and fortune to hit the "7" right on the nail. Thank you for your service!

PS - Ya, I totally 'get' looking at a professional and thinking he/she doesn't look old enough to drive.