Historical Photo:
Toes of the Statue of Liberty arriving at Liberty Island in the Late 1800's 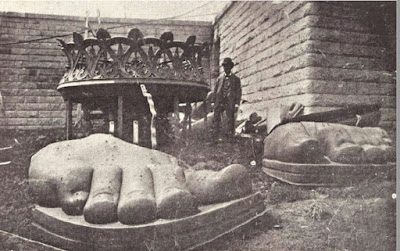 Today, lazy day on the bank of the fishing lake:

My grandson out in Utah just moved.  We had to ask for an address. He said something that made me think.  He said, “We (He and his daughter) only get mail from you, I forgot about the address.”
At a receiving for the death of a friend lately, his brother was there.  He drew several house plans for me when I used to work. As we talked his son came over and he introduced him. I asked the natural question, “Is he going to be an Architect?”
“Jack, he can’t read nor write cursive, thinks it is a foreign language.  But he is trying.”
I do write a few letters now, but they are on the word processer. I used to actually write long hand (remember that term?). When we were separated by orders, mostly on Government paid cruises on the USS (what ever), I wrote a lot of love letters. (Paula talks about writing Mel when he was in Japan, yes ‘them’ love letters.
In school and even lately when I see a copy of the Bill of Rights or the Constitution I WONDER how anyone could write that long a document with such beauty and correctness.
How is your handwriting? Mine has deteriorated. Sherry, Shirl and friend Mary Ann still have very good ‘longhand’.
Today I am taking a break, waiting for someone to come and fix the blow out on the motor home that happened a few weeks ago on the way to NC. I have put it off too long during this ‘fishing expedition.’

1.    Fontana Dam is the tallest dam in the Eastern United States, at 480 feet high.
2.    Many people believe that North Carolina was the first state to declare independence from England with the Mecklenburg Declaration of 1775.
3.    Grandfather Mountain, highest peak in the Blue Ridge, is the only private park in the world designated by the United Nations as an International Biosphere Reserve.
4.    The Mile-High Swinging Bridge near Linville is 5,305 feet above sea level. The bridge actually hangs about 80 feet above the ground.
5.    Pepsi was invented and first served in New Bern in 1898.

Everyone needs a break now and then. Enjoy the wait !

I have a tendency to mix cursive and print into my handwriting. I love to write though.
Lisa

Receiving letters by mail I think will become a thing of the past so very soon. Such a lost art with the schools these days not teaching cursive writing. Nice to see a post from you. Breaks are good to have while you are waiting for things to get done.

It's so good to 'see' you, Jack!
I recall being graded on penmanship in elementary school; 5th grade I believe it was. I'd broken my (dominant) left arm and was forced write with my right. Still, our teacher didn't cut me any slack; my parents were so cross!

Then, I had a tendency to write overly-large script: My pen pal even asked, was I practicing to write billboards? (Offended, I never wrote her again!) The only thing that bothers me about my longhand (love that olden word!) is - going left to right - I'm prone to getting ink stains on the side of my hand,

I like hearing from you - so you are waiting for your blow out to get fixed.
Okay I am thinking about what you said - the kids aren't taught cursive anymore - how to tell time on a clock - and a couple other basics. No library - books are going away too - every one wants to read on line - and when we buy books for Andy's school they are E-books.
I don't know I like a book in my hand.
My hands type better then they write - I can do a card - but a long letter no.
Take care.
sandie

Yes Melvin and I wrote each other almost every day for eighteen months. People at least the ones we knew didn't make many phone calls in the 50's. Thanks for remembering.

Intriguing title on this post! Yep, times have changed, still love to receive a "real" letter in the mailbox!!!

nothing like getting a real letter in the mail written in cursive handwriting. hope your blowout gets fixed real soon.