In my younger years I never expected to see a 60th birthday much less a 60th celebration of ANYTHING. This week Sherry and her classmates celebrate The Belmont High School's Class of 1956 reunion.  They have a three day Gala planned. The first day was a tour of their old High School, which is now Belmont Middle School. That was followed by dinner at Jackson's cafeteria. 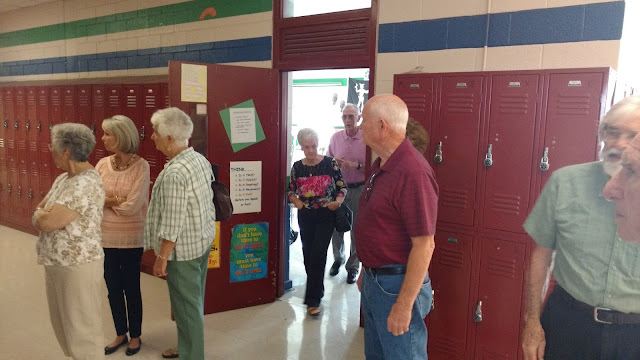 At the school, I watched as they took note that the lockers on the wall were the same as 60 years ago.  I heard the question a couple times, "Do you remember your locker number?"
"This was Mrs. Eaton's room."
"Oh, and Mr. Whitley's room was out there!" ('Out there', was a new wing that had been added to the school about the time this class was in High School). 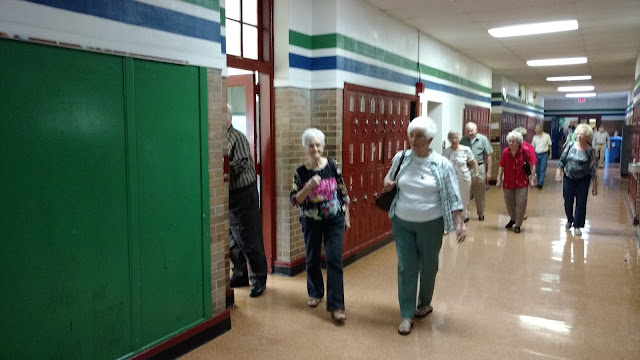 Most of the stories told centered on sports. Belmont Red Raiders have, on average, had great teams with several of the alumni heading to the Pro's.  Many of the folks attending were local sports heroes. Jimmy Hall (a world series player) was in their class but never attends the reunions.

There were stories of the typing class (do they still teach that, with all the rules etc?) 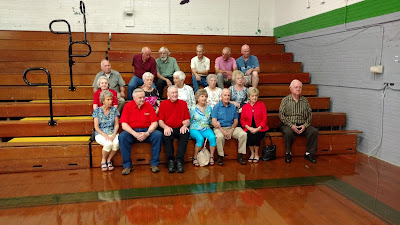 This class was during the time of segregation. So no Black members were in this graduating class. At the cafeteria there was a long line and Ed & Dianne made way for a black guy to get in line. He was very gracious and they were talking about the class reunion.  He said he graduated in 1958 and there was very few of his class still around. Since he too was from the segregated time, I am sure he noted there was not a person of color in this long line. School students cannot apologize for something that they had no control over. Although I did not graduate from HS I did attend during that period.

Oh yes, I did hear some folk 'bragging' on the cafeteria cooking. They knew the cook.

I sorta stayed to myself, this was CLASS time. Some of these folk had been together for 12 years of school. I had attended here about a year and a half before I dropped out, I think). I knew 10-12 of the folks attending. Once Sherry motioned me over to meet  Sam McKnight who holds two degrees from Duke (A professor methinks). He knew the man at Duke who developed the Cochlear implant.  He talked admiringly of the man who decided there would be no patent on the implant technology. Without a patent it would allow wider exposure and more technical development. It was a delightful conversation. 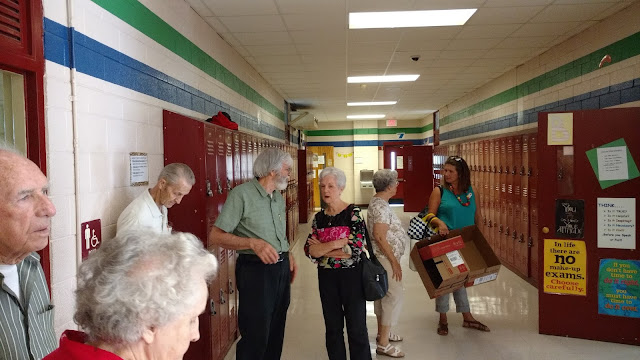 (Sherry and Classmate McKnight)
Anyway this class is enjoying all the joking and comradeship of times past. Laborers, salesmen, dentist, business men, educators and other professionals all joking and remembering ‘THE GOOD OLD DAYS’. But my girl was worn out after the first day.  Oh yeah, Black and Red are the school colors. 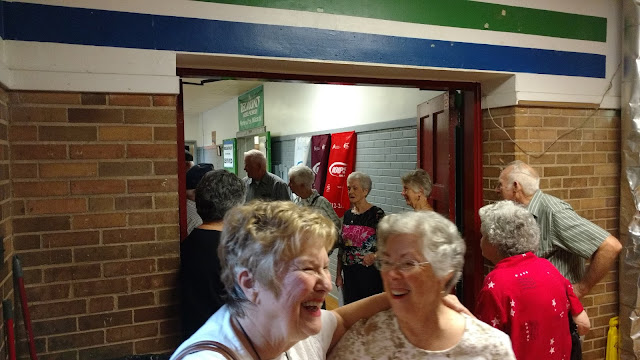 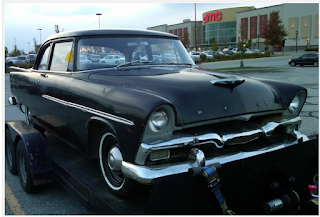 Like Sherry, most of the folk in Sherry's class were from  Cotton Mill Families.
Some did not have cars, and very few had new ones.
Posted by jack69 at 9:55 PM

I found this post very interesting as Sherry's school life was much like mine. Such as many of us went to school together all 12 years. I attended my tenth and 50th.

That was neat about not having a patent for the cochlear implants. I liked that inventor's way of thinking.

Wow, I can't imagine the memories that abounded at the class reunion. It had to be a bit emotional too realizing how much time had gone by and how young they once were and now the season of life they are in. I graduated from a much larger class than Sherry did (our graduating class was over 700) and I didn't really keep in touch with too many after I graduated. If I was in a smaller school, I might have done so. It would have been interesting to see where people's lives took them.

What an amazing experience to reconnect after 60 years?! Sherry looks pretty darn elegant, doesn't she?

Tom (who graduated '59) has similar, infuriatingly great memories for teachers' names and locker combinations. Not so much here. H.S. wasn't a particularly pleasant time.
I've never been back to a reunion, but have several FB friends now from LAHS who might never have given me the time of day 'back when.'

Cute post. sherry is the pretty one! I think its great how many ended up attending the reunion. Im sure some fun memories were shared.

Some good memories, some not so, of the 12 yrs I spent with 120 graduates, a handful that didn't graduate but went on, like you, to have successful, fulfilling lives. I often wondered, how can those dozen yrs. have been so impressionable. Really, what it was, was the dozen yrs. I spent so close to my siblings and folks that REALLY formed me. My best friends were the ones I went to Sunday School with and were in Choir with. Those were the best. The grade school is now the City Hall, Police station and Fire Hall. Middle-High School is now an apartment building. Things sure change over 48 yrs.
Have a good week

I love class reunions. There are some that dread them because they've gained weight, lost hair or some other goofy reason, but I love seeing my old classmates and hearing their stories.
My class 1968 was the first year of integration and we had four black folks. It was new to them and to us. I don't remember there ever being trouble as the naysayers predicted. It seems those folks were just like us and wanted to learn.

The school I went to and graduated from has been torn down and a new one has replaced it. I would have been fun to back to see it before it was gone. Lots of good memories there.

Sherry looks great; if you told me she was 60, I'd believe it.
I hope that the families of the men who left school to join the military were appreciative of the fact that their sons were not just skipping out....