Historical Photo:
maybe not Historical, but pretty danged old. This is Shirl , Bingo and me abt 1942. 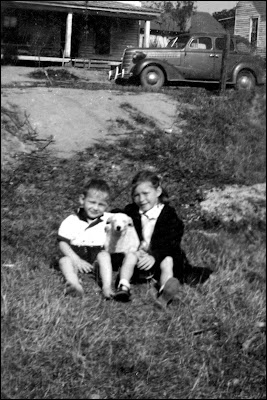 Dementia (a disease), not a fun word. Possibly some better than cancer but we do not get our choice of what happens to our lives in the secrecy of our unfathomable bodies. Some folk die young of lung cancer and have never smoked a cigarette. Then there are those who smoke a pack a day and live to be 100. There are the thieves and ‘never-do gooders’ who keep their brain to connive, while many Intelligent loving folks who have done ‘good deeds’ all their lives start losing brain cells faster than they are produced and become demented. (Simply stated of course)

Dealing with the latter condition can throw an unsick life in a tailspin. When a human of above average intelligence gets to the point they can recall hundreds of things, but cannot remember an important subject that was discussed in detail ten minutes ago, it is tough to comprehend.

There is no answer to the question, ”I have been healthy all my life. Never spent a night in the hospital in 82 years. I managed an office and now can’t find my way home from Walmart. WHY IS THIS HAPPENING TO ME?” When the question is asked many times a day you know no answer will satisfy nor fix the present dilemma.

My Sherry has a quote from a local celebrity in the 1950s here in North Carolina. Betty Feezer of local TV was attacked by deadly cancer. A fan asked, “Why did this happen to YOU?”  Her sweet soft voice answered, “Why NOT me?”  (Such a logically unselfserving answer)

This is not our first time facing dementia, my mama was afflicted by it in her later years. I know from your communications several of you reading have faced this at a much tougher level. Your thoughts and support are much appreciated.

Yep, the skipper of the Shipslog is still 'Gone Fishing', but stopped by to say I am still enjoying some blogs.

1.     Andrew Johnson started his career as a tailor's apprentice in Raleigh, North Carolina and rose to lead in the reuniting of the nation as the seventeenth President of the United States.
2.     North Carolina leads the nation in furniture, tobacco, brick, and textile production.
3.     Saluda, North Carolina is located at the top of the Saluda Grade. The crest of the steepest standard gauge mainline railroad in the United States.
4.     State Motto: Esse quam videri (To be rather than to seem)
5.     The town of Wendell was named for the American writer, Oliver Wendell Holmes.
Posted by jack69 at 10:33 PM

I read your blog, Jack, and I tried to leave a comment, but I couldn't put words into what I thought I might want to say so I thought "I'll read a few more blogs and then I'm come back and see if anyone left a comment and then maybe I'll have more words to write." So I head over to read another blog of a woman in her 50s just diagnosed with breast cancer.

I quote part of what she wrote as she tried to come to terms of this new diagnosis. "And yes, I admit I ran through the "how is this possible?" questions in my head. I'm thin, I eat a healthy diet, I avoid processed foods, I exercise, I don't drink heavily, I don't use drugs, I don't smoke. But you know what? If I've learned anything in my life, it's that fair's got nothing to do with it. Asking "why me?" is nonsensical. After all, why not me?"

Back to my thoughts, rationally we understand the concept of life is not fair, etc., but trying to get that point across to someone who is dealing with dementia, it has to be a bit frustrating to be asked the same thing over and over again in a given day. I guess perhaps the best answer could be "I don't know why this is happening to you, its not fair, but unfortunately life is not fair" and then try to divert and change the subject if at all possible. I really haven't dealt with too many people with dementia. My mom didn't suffer from it; my MIL did but in her final years with it I wasn't around her a lot. I do know it was terribly frustrating for my FIL to deal with. I know when I was around her I just went with the flow with wherever her mind was at, even if it was listening to the same story she had told dozen of times before.

I wonder if Shirl's doctor would be of any help to help you guys deal with all on your plate or maybe point you to a support group with others dealing with the same thing so you can have someone else going through similar things to commiserate with you and perhaps offer suggestions to help Shirl try to process this the best she can. I feel for her, knowing this has to be strange new territory for her to deal with.

Prayers for all of you!

I don't even know what to comment, we are dealing with it every day. He does still have his sense of humor. If I forget something he lets me know it and wonders if I'm getting "IT" too, then we laugh.

I've known several families that have had to deal with dementia and it is truly heartbreaking. All we can do is be of what help we can and be there for them when we can. One of my uncles spent some 20 years in a nursing home due to the fact that my aunt had to work and couldn't watch him every minute of the day. He was otherwise very healthy. Every day she would go feed him as he'd forgotten how to do that for himself. We none of us knows what life will bring our way. We only have to trust that we all are in God's care and he will be with us through all the good and the tough times. Keep the faith and hang in there !

Hey, this is Bonnie's sister...I just saw your post on ACTS forum. The cancer is rare (adrenal) and she is Stage IV. She is definitely not online at all any more and without divine intervention we are quite far along. We all felt like we knew you guys through Bonnie. Lots of love from us all.

I HATE dementia and AD ... those insidious things that rob one of his/her dignity. I HATE the guilt that accompanies me every day ... (for) not having recognized my mother's signs and insist she see another doctor.

I HATE that you're having to hike through these roiling waters.
... but I love y'all and pray for peace.

So very happy to see you're BACK, if only for a day!!! Yep, I'll hold my hand up as one of your readers who knows the horrors of dementia and Alzheimers. Somebody, somewhere needs to be the Marie Curie of the current day and solve this problem. (where there is life there is hope)
You and Sherry are in my thoughts and prayers, lots of love and hugs from Okeechobee...Glenda
p.s. some very interesting sidelights on history of NC, good job Jack! Y'all are an awesome duo, ijs (not prejudiced of course)

p.s. I really loved and agreed with Betty's and ALL the above comments...it's a major challenge and extracts so much from the primary family care persons. You have to roll with the punches (as YOU know) and make Lemonade. We don't ask for our trials, they just hit us and we learn to adapt. It's often so very painful and requires faith and hope, best wishes for you two as you continue this journey. Love, Glenda

It's unfair but only God knows His plans for each of us. My love and support are with you always through this challenge. Try to find one good thing in each day, whether it's Sherry's loving smile and understanding or the scent of a flower, the song of a bird. God works in mysterious ways. May you find peaceful days.
loveya, missya, hugya, kissya from our home to yours.
Dar n' Bill

“Caring for those who once cared for us is one of the highest honors”.
Hugs from rainy Myrtle Beach.
Lisa

I love your dog in the first picture.

And 82 years and not one day in the hospital - Jack that is very unusual and that is probably one reason this is so hard for you.
You have been able to go anywhere you want and now life is changing - kind of a shock. I think that dementia not only hurts the person who has it but the family and caretaker. It is gut wrenching.

I guess she knows it - and I bet she is scared. We have a young lady at church - 65 - a brilliant nurse - and head of a huge hospital here of nurses with it and it is shocking.

I hate that disease - I hate Lou Gehrig's disease - strokes - things that take our Independence away. It is not fair and it is not right, but who am I to say?

I have heard that Why Me and Why Not Me? I guess I have said it to myself at time too.

I guess if we live long enough - either someone we love or we ourselves will have something in that category.

You start out struggling as a baby - then you go to school - then you struggle to work - you have families and struggle - then you get to when you can retire - and bingo - The Golden Years.. life is hard, but God is good - we just have to trust in Him till the end.

I love you both....and I know that your love for each other will carry you through whatever comes your way.
Sending you the biggest hug ever.
Always,
Jackie