Today was another good day here in Tennessee. It is amazing how many friends ended up in this part of Tennessee. We went out to eat with the Brannens again. 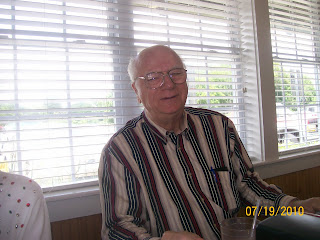 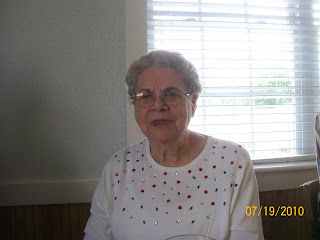 Muttie (instead of Muddie) also graced us with her presence. 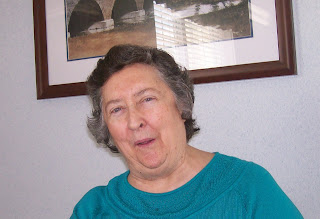 Frances was herself, I did not catch her famous smile, but she is the one who made Fred look so good in his career! 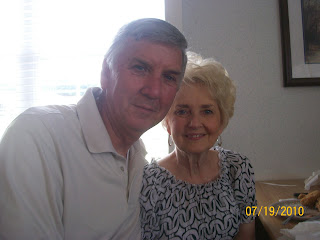 A great surprise, Harold and Miriam Woods. Harold left our little town after a call from the Orioles. He was a pitcher, threw left handed and batted right. He gave up a promising career to stay with Miriam. Harold was one of the good guys. While many of us youngsters were getting into some meanace and mischief, Harold never did. Always been a great guy.
His sister was my first girl-friend. 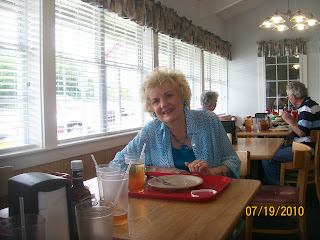 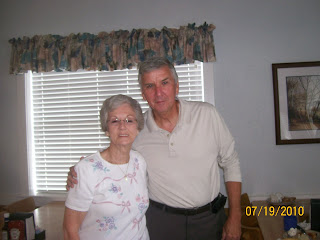 Harold gave Sherry a big hug and we said good bye.
Back at Fred & Frances' house Fred got us in contact with another old friend, another guy from Lousiana who had moved to Cleveland. 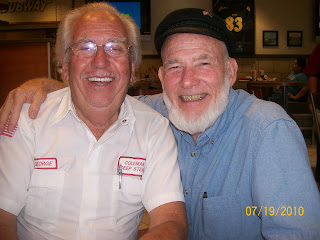 This is George, It has been over 50 years since we have talked to or seen George. He and I were in the Air force together. George has run his own business for 38 years. What has George done since I last saw him? Well he knew Sherry's brother while they were in Okinawa. He served Three Presidents on Air Force One. It is amazing how peoples lives wind a great tale.
I was thinking, how many average joe's like Sherry & I, have known people who worked for presidents. WE have a great friend, Dan Doughton, who worked in the basement of the Whitehouse now finding out that George worked on Air Force One.
These guys were just enlisted military guys, not well know politicians, but they did get to know presidents. Dan helped me apply for a job in the White house, but I didn't get it.
This has been an interesting week. Meeting old friends and talking about old times. I loved hearing about the lives of friends who have really done something exceptional with their lives.
WE love it. But getting ready to leave Cleveland heading North. Probably Wednesday morning. What a nice way to start our cross country trip.
Thanks for coming by the Blog.
Nite Shipslog
PS:
I don't know how I got over the hill without getting to the top. ???????
Posted by jack69 at 9:21 PM

I'm glad you have had a good time talking to your
old friends. I think that is wonderful. I was
trying to think of some important people I
have met just can't remember. I did meet
George Gobel, Buddy Hackett, Paul Harvey and
that was Las Vegas. Buddy Hackett signed my
place matt. I forget I am good friends with
Smoky Coe and Vernon Harris. LOL

What a wonderful vacation you and Sherry are having. Old friends, remembering days past, making new memories, it's what life is all about.
Stay safe as you travel. Keep the pedal to the metal, stay between the ditches and watch out for the 'blue light specials.' The further north you travel, the more you will see....these guys gotta get their quota, ya know. They hide behind trees with their speed guns right atcha.
Don't ask how I know.
BlessYourHearts

You are just enough younger than me to still have living old friends. Enjoy every minute, which I know you and Sherry do. I like the photos.

Tennessee has been a wonderful place for you to make a stop with all those people to visit with. I guess you probably plan it that way. It'll be interesting to see where you wind up next.