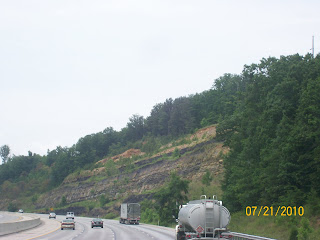 On the road again, we passed and followed many folks today, but the biggest surprise was.... 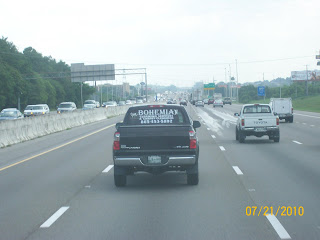 Ole' Joe, Lucy will be surprised that he was cruising North, he should be home by now!!!!!!
Todays Stuff:

Seems like a long time ago we left Belmont, but this week seems to have flown. We are now on the road toward Michigan (our next stop). As I have said the entire time we have been here it has been ‘awesome’, to use my grandkids buzz word. (One more surprise tomorrow!)
Steve, who is working for Wal-Mart and saving money to go back and finish his degree, uses the word ‘Sweet’.
Remember ‘made in the Shade’? Roger Slack, a boy I thought was cool, would say, “I got it made in the shade with table grade”. I never knew what that meant, but anything Roger said was cool.
Rog was tough, he was cool. He ‘borrowed’ someone’s Henry-J (that was a car, in case you do not know) and drove it until it ran out of gas, then tried to sellthe spare for gas money. Those local police gave him a ride back to the Albemarle jail in a new 1950 ford with a red light on top. Roger was still cool around us boys later and said, “Man that was cool.”
Dad was able to talk the owner out of pressing charges and the police let Roger go to be under dad’s supervision for awhile. Roger never got into any more trouble and grew to be a good citizen. I wish things could be that simple now.
This morning was one of the few mornings I am awake before Sherry. She lay there so pretty and I enjoyed watching her sleep. I never fail to thank God for this girl, I was so lucky. She is my ‘Sweet Thang’.
On the road is the place we love to be. I love our picture window. The local paper back home ran a picture I entitled, “The view from our house”. It was a picture taken from the motor home, through the windshield of the road ahead.
Tomorrow my last tale of famous folk who know us, and a great tale on my buddy!
Thanks for joining us on the road,
Nite Shipslog
PS:
A friend was driving with three young children one warm summer evening when a woman in the convertible ahead stood up and waved. She was stark naked! As the driver was reeling from the shock, he heard the 5-year-old shout from the back seat, ' Dad, that lady isn't wearing seat belt!'

It pays to teach your kids Safety first.

Please have you all a safe road ahead and a great Thursday as well.

You two have a great and safe trip. Helen

Cute story about Roger. The cool guy in our town did donuts on main street in his old car. Your picture window truly is a picture window ever changing. Nice entry! Paula

You do have the best picture window. It sounds wonderful to travel the way you do and that you have each other to share the wonder of it all. I hope your enjoy scenery and are blessed with nothing but blue skies!

If I had someone I loved to travel with me, I'd never come home...but you are home...you are my hero.

I've been up since 5:30a. Working on my 2nd cup of coffee now and waiting for Frances and Kathy to stir. We're to join Gordon and Glenda at the Cracker Barrel for "br-unch". We met Kathy and Rob when we landed in Nairobi, Kenya in 1989 - when we were both house-sitting for two different missionaries who lived next door to each other. Thanks for sharing the pictures and stories of "the road ahead" as you travel. There is some sadness in our house this morning - We miss you two! Be Safe!

I love reading about your love affair with your wife. I wish more men would share their good feelings.
Y'all are living the life I thought we were going to have post-Katrina. It's nice to live it vicariously through you and Sherry.