Thinking and Family for supper

Johnny and Candace came over and had supper with us tonight. We had a great visit. 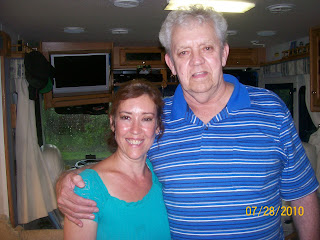 Sherry talked to neighbors who are here only for a family reunion. Sherry took note, they said the down town area ‘was not safe’. Maybe one block was, then the next block was dangerous and if you did not know the area you would not know which blocks. Ignorant country folk are intimidated or gold chains are ripped from their necks, etc. I don’t care for that kind of excitement.

As I stated, we have visited some of the world’s largest cities, but mostly to drive around. We walked some in Paris, but there too, you must be careful. We REALLY did not know that ‘neighborhood’.

That reminds me of our trip to Europe. We went on a whim. Sherry & I were still working and I saw an ad for an airline that gave roundtrip tickets to Frankfurt for $178 round trip. At the time, Sherry had a passport but I had to scramble to get a passport and international driver’s license. Buck, who worked part time digging in the dirt with a back hoe, agreed to go along. Along with his wife Alice we all packed up and took off.

Country folk, heading to see the world.(I had seen a lot of the world but in uniform, this was different.) We rented a car in Frankfurt, bought a map, and headed for Paris, France. From France to Switzerland and back up to Germany. It was a whirl wind trip but a lot of fun. We loved the food and people. Most everyone was nice and helpful.

We made it all the way without incident, and back to the USA. I found the drivers in Europe to be much more courteous than the US. (Except in Italy and Sicily where it is more fun but dangerous. There they love to drive with their hand gestures and horns. LOL. Over all Driving in Paris was the easiest, the French are for the whole, more courteous on the road.

I hated to leave Europe, knowing there was so much left to see, I think I thought I would return later, but never have. Now since 9/11 it is too much hassle to fly.

Now we are set to leave the Detroit area. I know we have not scratched the surface of things to see here, but the road calls.

Thanks for stopping by the log.
Nite Shipslog
PS:
More of Sherry’s advice to young ladies:
What do you do if your boyfriend walks out? You shut the door.

Then she gets into philosophy: If they put a man on the moon - they should be able to put them all up there. 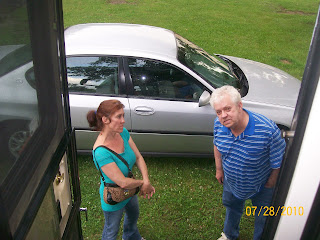 Johnny and Candace leaving. maybe we will see them in another couple years.

Dangers is one thing when we visit a City we don't know the danger areas. We went through
one area in DC. There was an accident on
95 and they routed us a different route. We had
to go through DC most dangerous areas. It was scary. Nothing happened but glad to get back on 95. Deliver me from those areas.

Stay safe. I have a feeling this one is going. Been missing you and Sherry and some others. Wish I knew why this happens and then clears up. Guess it will remain a mystery.

Guess the safety issue is for us older folks cause as youngsters we didn't have a care in the world. Never did get overseas...hmmm, guess I'll get there through my kids.
BlessYourTravels and Hearts

More and more it doesn't even take being in a big city to have things like that happen. No matter where we are it is important to be aware and cautious. You have had some wonderful trips and I know this one will be too. Take care!

We have to worry more about being in bad areas because we old folks can't run so fast anymore.

I agree with Dar. I had a feeling you were going to leave come hell or high water. Stay safe.

Agree with you that mostly every part of Europe is safe to visit. After a long day, it would be a joy to sit down and leave towards somewhere. Please have you all a great Friday and a safe road ahead.

I have never been to Europe and I wish that I can visit once in Europe.