I had heard so much about downtown and the GM Renaissance Center referred to as the Ren-Cen, I wanted to see it. We started our drive through Wayne, MI. This is the home of this Ford Stamping and assembly plant. 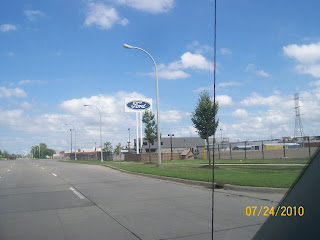 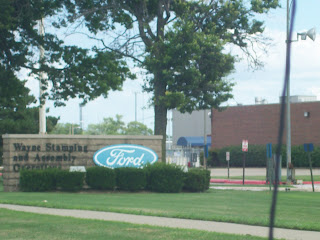 On our left going downdown on US12 (Michigan Ave) Was the giant Hyatt (Do they ever fill the 772 rooms?) 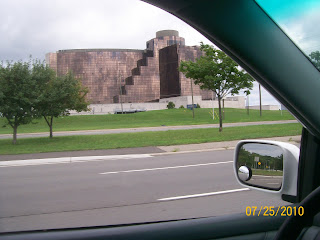 Just a little farther on down Michigan Ave, on our right is Ford Headquarters. Now I for one was surprised the Ford was on a better footing than GM when the economic crash hit. 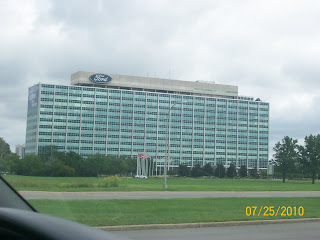 The next structure took me by surprise. It is the old Detroit Central Station the train station the heart of Detroit for so many years. Now a derelict gutted building, only a skeleton of its past glory. 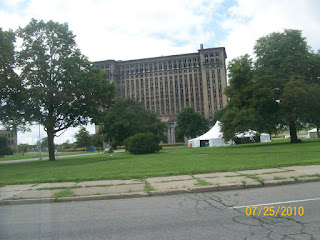 One of our first views of the Detroit skyline as we approach from the West. 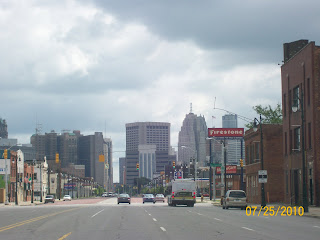 Stately OLD and new structures. to our right. (also to our left). 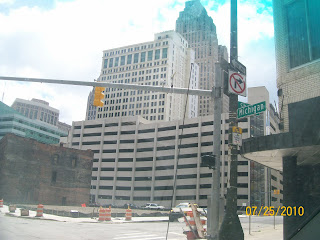 Straight ahead the side of a skyscraper shouts, "Quicken Loans, Proud to call Motown our new hometown". 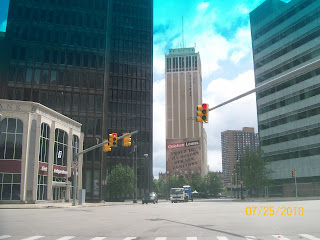 I do not know this building on our left, but with a concave front was unique. 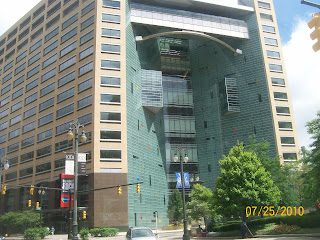 Finally a view of the Ren-Cen. There is a driverless people mover that connects all of the buildings in the complex. 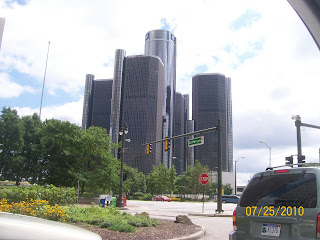 We approached on Jefferson, but swung around the complex to the water front. This is the opening at Atwater st. 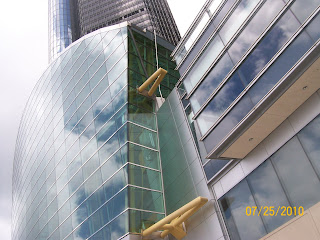 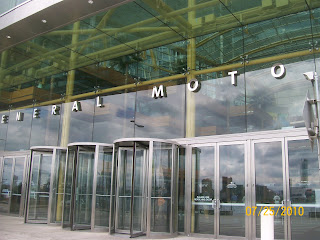 From here you can see buildings in Canada across the river. the camera was acting up at the time.
To the shame of Detroit, and Henry Ford would roll over in his grave, the population of Detroit has dropped from near 2 million in 1950 to about 900,000 now. The inner city crime rate is one of the highest in the nation, however the area near the water front does not have a high crime rate.
To be honest I am not comfortable in large cities. We have driven (uncomfortably) in Boston, DC, NewYork, Paris, Frankfort, kansas City, Los Angeles, Dallas, etc.
We are mostly small town folk and feel more at home in a place where we feel comfortable stopping anywhere. I get edgy when I start seeing metal screens, plywood, and steel bars over doors and windows. I know they are there for a reason not for the fun of it. I am proud of you if you can feel comfortable. 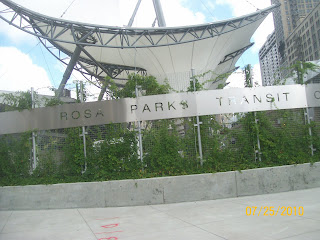 Driving back out toward I-94 which we are going to take home we pass again on Michigan Ave the Rosa PArks Transit center. Very aptly named for Rosa Parks who refused to go to the back of the bus or give her seat to a white person.
In another entry maybe, I will show the bus that Rosa sat in. It is housed in the Henry Ford, a great museum in Dearborn. 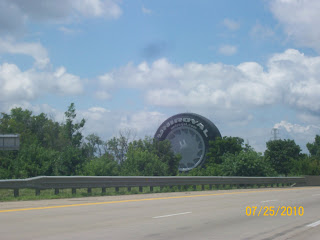 I like unique sights. This is a giant Uniroyal tire on the left of I-94 leaving etroit proper and headed back to Belleville (thru Inkster (unique name ,huh?)). 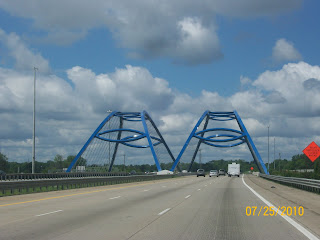 Another unique sight just a little further West. these BLUE beamed Bridges.
Thanks for going with us to see a few sights of Detroit.
Nite Shipslog
PS:
WHY ATHLETES CAN'T HAVE REGULAR JOBS...
1. Chicago Cubs outfielder Andre Dawson on being a role model:
"I wan' all dem kids to do what I do, to look up to me. I wan' all the kids to copulate me."
2. New Orleans Saint RB George Rogers when asked about the upcoming season:
"I want to rush for 1,000 or 1,500 yards, whichever comes first."

How cool. Now I can say I have been to Detroit, Michigan. I am getting so many sights for nothing. Wonderful way to travel. You 2 be careful. You would be missed terribly if anything happed to either of you, plus it is a nice way for me to travel.

The blue-beamed bridge reminds me of our 'Dolly Parton' bridge...or as I call it the 'ti**y bridge'. :)
Thanks for taking us along on your travels...
Stay safe and be careful, Sheila

Thanks for the trip down town. I've heard about the crime in that area and it's so sad. Still with all those big buildings it does make you wonder if they are all occupied. The pictures were lovely and as I know I wouldn't drive there I appreciate seeing some sights I wouldn't otherwise. I do love country roads.

I have a hard time driving in small towns I
would get lost and never get out of that place.
I would need a tour guide and leave the driving to them. I have read about the crime which is sad. Nice pictures. Try to be careful stay safe and cool. It is hot as blazies here.

Thank you very much for this great journey through the town. Looks surely modern to me. Agree with you totally about small towns ! Sending you a peaceful and great Tuesday.

Yep..a lot to be said for small town and country life versus big city life. I don't even like going to Owensboro and it's small compared to a lot of cities. Guess that's why I'm not much on traveling but I do enjoy seeing all the places through others eyes who enjoy traveling.

Since I have a hubby who works on vehicles I could elaborate on your speculation of one of the above named companies but I won't. I'll just say.."JUNK".

Nope, no thanks on the big city life...all that glass, steel and concrete...no wonder there's so much crime there with all the heat bouncing attitude around...
I will stay right here in my own country home all cozy, relaxed, cooled by the trees and earth around me. God bless those who can handle the big city. But for me, I will always be content in our little piece of heaven.
So, travel safe my friends, wherever your road leads you next.
BlessYourHearts

The Via Colony said...

Thanks for stopping by my blog today. Ya'll have quite a story! Amazing!!!

I grew up in a tiny town of 1000...then moved to Houston. It was a huge adjustment. If I could earn enough money to support myself in a small town, I think that's where I'd prefer to be.

It's hard to think that "Motor-City" is now wheezing and gasping the raspy sounds of death and dying. In December 1969 I was assigned to Monroe's Roessler St. COG and the area was strong and growing. I resigned on Easter Sunday and went back to TN. Forty years has made too many changes. Thanks for sharing the great pictures.