The SHOT and conspiracy theories. 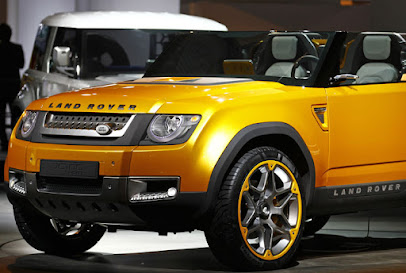 Future Land Rover (The white car behind confused me, LOL)

Note about yesterday's entry: Doc took both the Pfizer and J & J shots, my Sherry says!

I think I have made up my mind to take the shot, now to decide which I want. I really don’t want to have to go back for a second one.  Not that I have anything against any one of them, I just like to get it over with and behind me. LOL

I think I would take two of them IF I could get them at once. LOL (again)

I am active on a blog that has a religious base, mostly fundamental preachers and laymen. There are some preachers that have a strong opinion of the present and past Political  administrations. There are some who TEACH & PREACH the shot is evil and will change your life. Some say there is a chip in the VAX that will allow the government to rule your life or change your DNA, or something else.

Fauci is evil and determined to kill seniors. He is the one who determines where the vax kills, and it is always in a Republican or conservative area. I am sure Fauci has been wrong at times, he is navigating new waters of science. BUT I have no doubt he is smarter than I and some others.

Are conspiracy theories WRONG, are they bad? Or are they just silly ideas put out by someone hiding behind a QAnon figure?

Some people love the conspiracy theories because they are contrary to standard opinions. YES they are silly until you Read as I did today: MAN KILLS HIS TWO CHILDREN TO KEEP THEM FROM GROWING UP INTO MONSTERS, HE READ ON QANON THAT THEIR DNA was CHANGED BY THEIR MAMA.

NBC NEWS (yeah I know that is fake news, but it did happen)

A California surfing school owner who was charged with killing his two children in Mexico is a follower of QAnon and Illuminati conspiracy theories who thought the children "were going to grow into monsters so he had to kill them," federal officials alleged…….l L

One pro vax pastor listed hundreds of medical professionals who declared it was better to VAX than not. He also listed a survey that reported over 90%++ of Drs. Took the vax.

Someone come back and said, ‘yes, they are required to take it or they cannot practice. They want everyone to be in the same boat and die.’

Then one came back with this ‘snide comment’ that I liked:

It's hard to believe that these educated men and women of medicine who studied 8 years and then did residencies in hospitals don't know as much as preachers and nurses! Don't these people know the vaccine will kill you or make you grow an extra nostril? I'd rather get my medical advice from TV preachers and uninformed pastors, but that's just me.

I did laugh at the comment and even agreed. If you don’t agree with me I have no problem with that, it is okay to comment. I have never deleted a comment. I read and respect other opinions, but I also have mine.

I do not give medical advice to anyone even my wife. If asked I will give my opinion, but it will not be advice. I would feel terrible to tell someone to ignore a physical sign or pain, and it turn out to be an indicator of something deadly!

Life, LIFE is good, we all must try to be wise to navigate here.

Sadly I think I will have to get the shot or lose my job. I am still deciding but if I get it I will go for the Johnson and Johnson one. So much for living in a free country. Won't say more because I am pretty disgusted right now.

I don't think Dr Fauci is trying to kill seniors. He's a senior himself, what he's trying to do is save lives. The poor man has his work cut out for himself though. He was wrong last year though when he said masks weren't necessary. I was like "huh?" and wore one anyway. Turns out I was right. Some of these Q-anon conspiracy theorists are scaring the crap out of me. If we listened to them we'd all be dead.

Life is getting very complicated. We need to pray more and trust in God even more than that.

Everyone should do what they feel is good for them. If a person wants to get the vax, they should. If they do not want to get the vax, they should have the right not to. It may be right for some and wrong for others. I refuse to take the shot. I just do not trust the people behind it. It’s all to fishy to me right now. I also know two healthy people that died a few weeks after taking the shot with unknown reasons. That’s enough for me. If I have to make a choice between my job and a jab, I will be unemployed again.
Starting today, they are requiring all of us to wear the mask at work again. This is upsetting enough to me but I can live with it.

Interesting! I didn't know you could have a choice of which vaccine ... but then, everything's changing at warp speed. Tom and I were given the Moderna and Pfizer, respectively, with no ill effects other than a sore arm.

Seems whoever you talk to has a story -- they know someone who knew someone who ....
There's no absolutes, true. But I think Fauchi and the CDC are doing the best they can with what they have.

Funny, I was telling Tom last night I don't recall anyone saying, "Nope. I'm not gonna take that sugar cube in the little white cup." Nope, we First Graders all lined up like we were told and our parents probably breathed a sigh of relief their child wouldn't wind up in an Iron Lung.

I could hardly wait to get the shots. I got two of the MOderna. I didn't go for any of the theories but decided that if it was a matter of living or dying, I wanted to live. My SIL's mom died from the corona virus, and I didn't want to die like her, so got the shots and still am wearing my mask when I go out. I'd rather be safe than sorry.

The subjects surrounding this horrid virus is so controversial. Should we get the vaccine, should we wear or take off the mask....we did get the double vaccine, Moderma, without any side affects. We also wore the mask a couple weeks past the shots. We are still ok. I do think, however, that it should be a ' personal ' choice. I don't think any working establishment should have the right to ask to see proof with their card. That's like asking to divulge your personal medical history...it's no one's business but your own. There are so many false interpretations again....politics. This is 'supposed to be' a FREE AMERICA where our decisions remain our private business much like a political ' vote.' We didn't have much say there either.....our nation is crumbling. I pray for our children and their children.
loven'hugs from our north where it's a nuff said day.