What a hectic few minutes!!!

I did not get photos of our 'episode' . 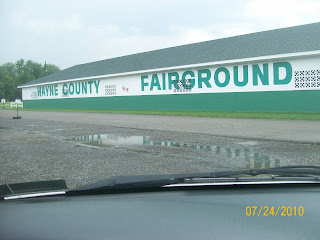 We were sitting in the motor home yesterday enjoying the stay, when all of a sudden it started raining, a real down pour. I had our patio awning out, and had not been able to anchor it to the ground; the anchors would only go down a few inches so I skipped them. The wind got up a little and I knew it was too late to bring it in. Once the wind gets up past 20mph you do more’ sure’ damage trying to bring it in than you ‘might’ get if it stays out. It is a big gamble.

Before we could really decide a deluge fell along with wind of 50mph with gusts higher. The Awning folded on one end. I took my hearing aids out and held the door as I opened it. Not ready for the power of the wind. The door was ripped from my grasp.

I quickly moved to the back side to push it shut and the wind was so strong I could not move it. Steadily I pushed on the door and finally got it past the point of resistance and I slammed it shut.

I proceeded to pull against the awning and hold it until the wind actually stopped, only a few minutes. I ran to the other end grabbed some tools and stakes from under motor home and tried to anchor the awning. The wind pulled up what I had done. (I wasted water this morning taking a bath, all I needed was the soap now.) I fell once and said a few strong words.

In a few minutes the wind nearly died. I got the awning rolled up and tried to open the door, nada. No door would open. Being deaf, I can’t talk to Sherry. I finally got it across to her to ‘kick’ the door open by sitting on the floor and placing both feet against the door. She did that as the wind was picking up again and it was still raining a little. After a minute or so we succeeded in opening the door. It had sprung with the winds force.

I ran to my ever trusty tools and got the grinder. Drug out my folding ladder and Sherry plugged the grinder in for me. Fighting a little wind I ground the frame down. After a few tries we were able to grind enough for the door to close and open. I got the grinder and ladder put up just in time for the next attack of wind and rain. What a day! Well really what a period of about thirty minutes.

Inside, dried, clothes changed, and seated. Sherry looked at me and said, “Maybe we had better quit this traveling and head back to NC!”
Nah, maybe after the ‘SWAN SONG’, but not right now I am having too much fun!!!!

PS: We had another good visit with Johnny today. 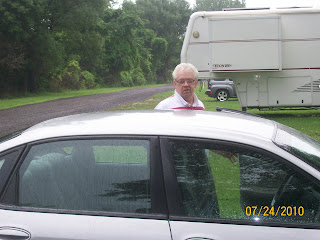 We have found that Paula’s is a good place to eat. We Eat at ‘Paula’s Café’, in Lenoir, NC and today we ate at “Paula’s Country Cooking” in Belleville, MI. the waitress even said, “May I hep Y’all?”(In Michigan?)
In Texas, That John must be a lucky guy!

Hope the sun is shining for you today!

Wow, that was some rain storm. Glad you got the door taken care of. Be safe.
Sonya

wow! By the way Jack...that SUV ran for a day and a half! or something like that...lol

Isn't it great how it looks once one is able to look at it as a memory - glad everyone/-thing is safe. A great start of your Sunday.

I don't react as well to "emergencies" as well as I used to mainly because my brain never seems to remind me that I'm no longer 21 years old. It only seems to kick in after I've committed myself to resolving the "emergency" and that's way too late!

I'm glad you're enjoying your visit with Sherry's brother and his family but dang I'm sure you weren't enjoying the excitement from the storm. I bet it seemed more like hours while you were out in it trying to save the awning from damage. I'm glad you were able to get the door fixed but it seems awful dangerous to be using a grinder when you're soaking wet. I hope you didn't get injured in the fall and I'm thankful you didn't get electricuted.

Man! What an experience. But then you knew just what to do and got through it and you were not injured. You are both safe now. We're just relaxing here as much as we can until our business starts on Tuesday morning. Paul and I went to Wal-Mart last night at 9p and the place was absolutely crowded. I felt the atmosphere of "Dizzy World" there. Ah well. Tonight we decided to go to Golden Corral for dinner - which was only a two hour drive to cover the four miles from our condo. LoL. I dread the driving into the convention center. Hope y'all have no more of those incidents with the wind and rain. Be Blessed!

I'm glad you were able to rescue the awning without hurting yourself. Maybe you guys should learn some sign language. (That one finger salute doesn't count.)

I think Sherry is right. We are having such
unpredictable weather. I think that was an
OMEN. Think about it I know your don't like to settle down. But you can travel all over NC and be close. Just want you home. We are getting old. "DIDN"T MEAN TO ADMIT THAT"

Sounds like a "fun" time was had by all....send some of that rain to the NC mountains....the New River is below 2feet...you can almost hike the river instead of paddle...LOL!!

So, it is not always easy traveling with a camper. Sounds like some strong winds. Good that you are handy with knowing what to do.

What a time you both had. Glad that you are not hurt from all that. Sounds like some good places to eat.Helen

Whew, I'm plum tuckered after that! Glad you two made it through the worse of it tho without getting blown away with the wind and rains. We have sure been having the strange weather 'round here. Be careful out there.
Fun that you are eating at 'Paula' places. We would rather eat at the Mom and Pop places than the fast foods that make us sick.
Drive safe and have a great visit.
BlessYourHeartsSherryandJack
Sounds like the Lord intervened again and saved your fannies.