Automobiles from The Past: 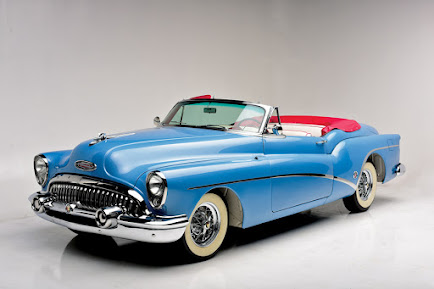 This is a 1953 Buick Skylark the most impressive car made that year.

Myra pays attention to detail. I posted a picture of my computer work space. I have a little man under our printer made from 2, $1 bills. She asked if there was a story behind it, Yes there is a short story.

WE met with some old friends (from 1951-1953) a few years ago in Valdese. I have some good memories from Valdese. I have a couple lifelong friends from there. We met at ‘Myra’s’ a local sandwich shop. An old friend Robbie Cook was there. Robbie is in the business of insurance. As we talked he was folding money. It was a hobby of his. He said most of his customers had some of his ‘folding works.’ 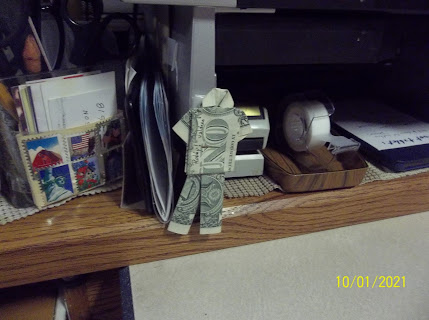 His wife Betty was with him. She is still a very pretty girl. Betty was my first girlfriend, but she never knew it. What was that called, a teen-age crush? LOL

Valdese, a small mountain town, has grown some since we moved there in the early 50s. It was settled by the Waldensians from the mountains of northern Italy. The little town was separated by about 20-30 undeveloped acres in the middle. Owned by Albert Tron. Mr Tron had a falling out with the city he was a wealthy recluse. This is the story as I heard it. The school playgrounds bordered Mr. Tron’s property. If a ball of any kind went over the fence, no one could retrieve it.

The town decided to install parking meters on its one main street. When the meters were installed Mr. Tron opened a giant FREE parking lot in that center section of town.

As I type part of this entry it is Sunday morning. Sherry just got a call from the Ypsilanti area.  Her last brother Johnny is in the hospital with pneumonia. Things do not look good.  The last time we got a call like this, we dropped everything and drove to Michigan from Florida and Sherry nursed him back to health. Johnny is single, and has friends and some family there.

AS many have found, this is a tough time for sickness, complicated by the Covid.

So sorry to hear about Johnny; will say a prayer. Myra does have good observation skills. I totally overlooked the man made of money :)

My sister likes to make money origami. She can make all sorts of shapes and characters.
Sorry to hear about Johnny. You are right, Things are tough right now with this virus going around. I am just now seeing it hit closer to home around here now. A few friends have came down with it but all are ok so far.

WoW, sorry to hear about Johnny, We will put him on the Prayer Chain ! Yup, things are tough ! Any special Plans for your B-Day coming up ! Spitting some Snow right now ! Take Care, sending Good Thoughts your way, Gary an Anna Mae

First and foremost, our hearts full of prayers for Johnny. I remember when you came to MI in the dead of a cold snowy winter for him. It's a tough time but he's a tough man. God speed his recovery. I've made origami planes and hearts for the graduates years ago. It's fun. I love Mr. Cook's shirt and pants. So did you get a discount on your insurance? lol Mr. Tron was interesting, from not letting kids retrieve their baseballs to opening a parking lot for all and anyone to use. Does he have kids? lol You always come up with interesting reading for us. Thank You.
loven'hugs from up north where it's still frosty for the 11th day straight, I believe, but the surroundings are sure a sight to see. Beauty surrounds us like another God Wink. Again, prayers for Johnny.

Prayers for Shirley's brother, it is hard with the virus, no one can visit in the hospital. Will hope the good Lord restores him to good health. We never forget this first crushes do we? Nice your's is still around and you can keep in touch. Hope you are still enjoying your vacation. Stay safe and keep well.

Aw, thanks for the shout-out! :) Some people are so talented, and seeing that must reawaken fond memories.
I'm lifting prayers for Johnny. Didn't y'all just visit him recently?

I do hope Sherry's brother can battle back. How hard to be away and even if there not being allowed to visit because of Covid. Prayers are going your way. Loved your story about an interesting town! I'd love some folded money....big bills please!

Saying prayers for Johnny and you and Sherry. I know how it hurts when family is unwell and you cannot be with them. You have a lot of prayerful folks keeping him in mind. Love and hugs, Glenda