Meandering, Shoes and socks & Around the Horn. 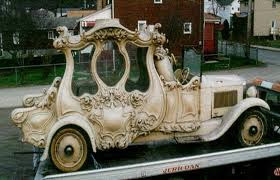 The Hearse for a fancy burial

... Update on BIL Johnny’s planned services. Sherry & Brenda spend some time today at the Mortuary to find out what they could. In this process they have found that there is enough funds available thru a GM policy to cover the burial expenses. Sherry is relieved and the process can go forward.

Like a lot of folks Johnny had put back some money for a rainy day, but Ins. Co-pays became his rainy days it seems.

I am still playing in the woods and yards, along with repairing stuff. I am learning to just stop for a few minutes and pet two cats. They will both sit in my lap, in the basement or around my fire and talk about when they were little puppies..

Today shoes and socks that got my attention. Mainly because my favorite ‘tennis shoes’ falling apart after only 2 years. Then I realized my socks were showing thru one side. So..When did socks come into play?

A sock is a piece of clothing  worn on the feet and often covering the ankle or some part of the calf. Origin about 8th century BC. Some type of shoe or boot is typically worn over socks. In ancient times, socks were made from leather or matted animal hair. In the late 16th century, machine-knit socks were first produced.

Over time my shoe type has changed. From leather to Tennis Shoe; shoes became synthetic, using a lot of canvas.

Did you know they were the best ‘holders of odor’ of any shoe in history? So much so that at times mama said, “Take them OUTSIDE!!!

After 17, and the military, I went back to leather shoes and boots. There was a short period in my life I tried to wear my loafers sans socks, it was supposed to be cool. 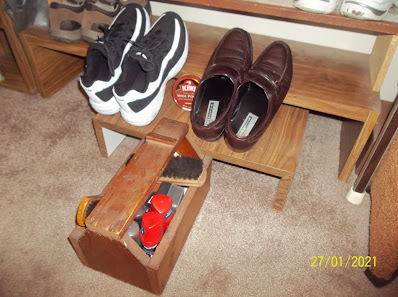 (My replacement tennis shoes (walking shoes) and my old Flourshiem's. That is Kiwi polish in the center. LOL

I wore a pair of Florshiem loafers a couple nights ago to church; they are nearly 40 years old and still look good. They are the only leather shoes I own. I bought them to wear with my new suit for Sherry’s 25th HS reunion. I actually have shoe polish to use on them. LOL

I was a shoeshine boy for a while as a kid. Every barber shop had a shoeshine stand. My friend Jim Page in Valdese had a full time job as a shoeshine boy. He could make that shining rag POP! That occupation has gone the way of the straight-drive car. Do you own any leather shoes? Possibly Gary the retired LEO does.

PS: For your information:

I have met a lot of sailors who have been around the horn. Mostly before the Panama Canal. Just south of Argentina where the two oceans meet. I have never seen this but heard a lot about it. It is hard to believe.

What a fancy hearse. I am sorry about Sherry's brother - I am glad there is enough to bury him - $$$.
Florshiem shoes - I remember my husband used to get those too.

I always look for “real Leather” shoes unless I’m buying canvas. I have leather flip flops, does that count? Sometimes I have an allergic reaction to leather. The dermatologist said since Im allergic to Nickel, some leathers contain that same chemical during processing.
I also like a good leather purse.
My dad always made sure he wore genuine leather shoes.
Socks? Usually always unless they are loafers.

Heading to the mall to work some, if you happen to stop in Belks today or tomorrow, come see me. Any associate can find me fast.
Lisa

I have enjoyed this Post, I went from Sneakers in School along with "Barn Boots" to 1 Pair of good shoes for School and Church, with 3 older brothers "Hand Me Downs" were mine and not unusual to put wet newspaper in the toes and wear them so the paper dried and the shoe fit perfect "almost" !!!! I have a pair of "Police Shoes" left I cherish, Walked many Miles in them covering the Beats and having them resoled by a "Cobbler". Mostly now it is Loafers, *(Dockers) for easy on and off. Glad things are progressing with Sherry's Brother Funeral, Tell her "Condolences an Sorry for her Loss" ! Only - 10 BELOW Zero this Morning !! Sending down Love and Condolences, Gary an Anna Mae

Here in Ohio itt'a worm wool socks and boots kind of weather. We got to keep our feet warm and dry. Tennis shoes only come out in the summer here. Glad you had a good fire to sit by. Now maybe you can get a new pair of shoes to wear. Sounds as if you are over due. Glad things are finally settled and what a relief for Sherry. Knowing that there are funds to cover everything. Keep warm and keep safe there !

That's some fancy hearse...I don't think Johnny would mind going the average way. I'm glad things worked out financially. Funerals are so expensive. We have moneys set aside via insurance for such a thing. Leather is our choice whenever possible. Bill gets diabetic shoes once a year, always leather, from work boots to loafers. His tennis shoes are canvas and leather. My shoes are nearly all leather, including my sandals. My garden boots aren't and they're the only ones that my feet sweat in...grrr. WOW WOW WOW where the oceans meet...amazing from direction to color. I don't favor water travel but I'd love to see it. WOW
loven'hugs from up north where it warmed into the upper 20's with a couple more inches of snow on it's way.

That hearse!!! At first glance, it made me think Cinderella's carriage. :)
So glad Johnny's arrangements are being finalized. What a load off your and Sherry's shoulders! Ya, when I worked that brief stint at the funeral home I was astonished at the prices. There's lots to be said for the Neptune Society.

Neat shoeshine kit! Tho' he only had a couple pair of 'nice' shoes, my dad always favored Florsheim.

WOW on that video! How I'd love to be aboard that ship.

I agree with Mevely317: "lots to be said for the Neptune (or Trident) Society"

When it comes to shoes and socks, I am almost embarrassed to mention it. I have quite a collection. Like Woody (Gary), I tend toward 'loafers' - i.e,, 'slip-ons' for easy on and off. But I have several pair of leather 'dress' shoes and also boots. And my sock drawer is ridiculous.