In another life I performed magic.  I was a Magician for adults and kids. It is strange, we all know every magicians act, it full of tricks. I always explained that to children, This is all a trick, if you catch me, you are good, because there is no REAL magic.

I was asked to fill in on Sunday morning at our church.  I always mixed some sleight of hand before the main program, which this time would be a chalk drawing of the old hymn, ‘The Love of God’. The picture is of a light house, a calm ocean, a huge feather quill dipping into the ocean. The picture is highlighted with invisible black light chalk.

The words across the sky,

“The Love of God”

Of course it is written in invisible chalk. Sherry controls the lights from the audience by remote control so the writing does not  come out until Sherry turns on the black light.

A magician or performer is not always lucky, but the pastor made a point against alcohol the week before I was to perform. He said ‘The only way I will drink wine is if someone turns water to wine.’ That set him up and he did not know it, because in one of my acts, I do turn water to wine. (Well it looks like it anyway.)

After being introduced the next week, I had the Sunday paper, read the headlines so everyone would know it was today’s paper. I leafed threw it and read a couple things. Then made a funnel and poured water into the paper. You have seen it many times. I then carefully unfolded the paper, the water was gone! Of course I am upset (part of the act). So I told the story of the Lord’s first miracle. I picked up the paper, folded it again and poured  a dark purplish liquid into a glass. (I can tell the pastor ain’t liking this)

I quoted his statement from the week before. Asked for a show of hands of who remembered him saying, he would drink wine only if someone turned water to wine. The whole church held up their hands.

I handed him the  glass of ‘wine’. He tasted it, What a relief when he realized it was grape Koolaid. I poured some for one of the children, then told the audience something had gone wrong, it turned out to be Kool aid, but I would work on the process.

I started this to show a number trick.  Maybe tomorrow.

unless he KNOWS the answer. 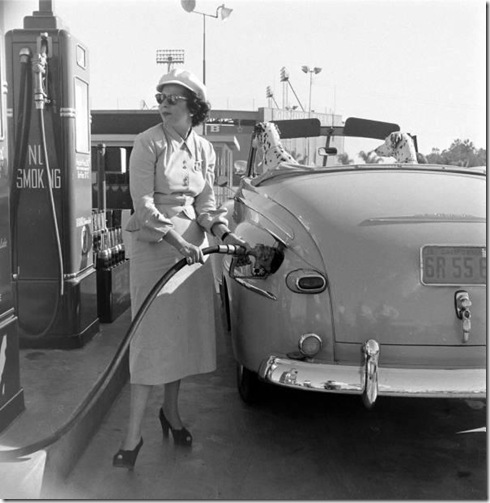 ‘46 to ‘48 convertible. I do not remember a self service service station before 1960!  (NJ and OR still do not allow self service methinks) 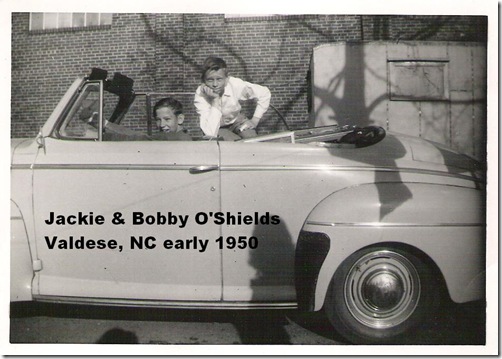 Your chalk drawings must be really something to see. I don't recall if I mentioned it or not, but years ago when I was involved with our church youth group, I'd schedule a man to come once a year with his chalk drawings. I still have one stored away up in the attic that he gave me. I don't have the special light though. I don't remember any self serve stations around here till probably the 80's. I used to love having that service. Now that I am older and could use it, I have to serve myself. The sun is out and a little warmer here today. Still hoping the rest of the ice melts off the driveway.

Jack, Joe asked me the other day what you did for a living and all I could say was "he has done it all as far as I know but have no idea what his true occupation would be named..

That car was fun to ride in Mildred
and Bobby would drive in from
SC to see us in Valdese. We
would toole around in town. I sure
it was white. Oh those good ole
days.

I would LOVE to see your magic chalk. You don't have any videos of it do you?

I hope you do write about the number trick. I would have loved to be in the audience when you were doing this trick of turning water into wine :) (or grape KoolAid). I'm sure the look on the minister's face was priceless!

I was thinking the exact same thing when I looked at the first photo of the lady pumping gasoline. I thought, "No way!" There were attendants who did that, checked the air in the tires, cleaned the windshield and checked the oil.
And...I love the fact that you are a magician. Love reading about each illusion you performed and can't wait to read about the next one.
Thank you for sharing.
Smiles,
J.

Jack, you sure do a great job as a magician! Did that water into wine trick for my grand-daughter and didn't spill a drop! The results sure looked like wine. Haha. On the self-service theme... I remember at least one pump attendant scolding me for trying to pump my own! He said something like, "Whatta ya want? Me to lose my job?"