Einstein used numbers to prove many of his theories. Our Government is run on numbers. Our politicians make decisions and run campaigns on numbers.

We would all love BIG numbers when we look at out bank accounts. It is strange how numbers can be interpreted and managed. I got this  one in an e-mail:

Your shoes can tell you your age, try this and see:

· The first digit is your shoe size while the last 2 digits are your age..

If you didn't do that, it really doesn’t matter, a lot of folks shy away from numbers, that’s okay. Here is a simple one I used with teen agers:

Announce: You are going to pick a number and manipulate it in your head, so pick a simple number (or hard number) according to how good you are with mental gymnastics.

1. So go ahead pick a number, do not SAY it aloud. (It doesn’t matter but they do not now that.)

Of course you have 21 in the case above.

(The answer changes according to the amount of gyrations the magician can keep up with himself).

This is a simple ‘magic’ trick of misdirection. The audience is ‘NORMALLY’ so engrossed in the math they do not notice the magician has, oh so shrewdly, erased the origin a number from the equation, at this point every one has the exact same number in their head, no matter what number they started with. They have only the figures the magician has in his head.

Since this is simple thing, you must only add and subtract until you  say “subtract your original number” (UP TO THAT POINT YOU CAN ONLY ADD OR SUBTRACT OR THE FORMULA WILL NOT WORK)

Once the original number is subtracted the performer can do anything add, subtract, divide or multiply, because the audience has only the numbers he has supplied.

I like numbers, I count steps, there are about 2000 steps in a mile. Taking my pulse I count the beats for ten seconds and multiply by 6.

(I thought for sure as long as we had checks we could write one! LOL)

Thanks for stopping by the log.  If you don’t like numbers, come back again. I won’t be using them again.

NEVER tell more than you know. 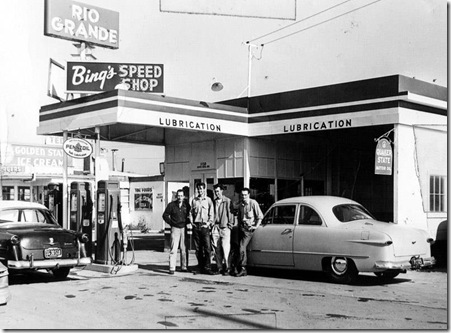 Jack, nothing stops the Obama administration from spending more than it has. Why not use them as inspiration and go on a spending spree?! The Gutless Old Party does nothing to stop Obama, so why would Sherry stop you? The inquiring mind of «Louis la Vache» wants to know!

Neat service station photo. «Louis» likes those early '50s Fords. Bob Bourke who styled the splendid '53 Studebaker Starliner had a hand in the styling of that generation of Fords.

I tried the 1st one and it worked, it is amazing!

I tied the numbers and now I am
16. You tell me to spend, spend
spend so you can do the same and
tell Sherry to spend. You said
you was not going to get a U-haul
and let me take my money with me.
I love shopping even when I don't need anything. Names of the game
is spend.

Somehow we cannot get along with out numbers for sure. My bank account will soon be minus a couple of numbers as the battery in the car died today. I need a new one and they had to order it so tomorrow we'll be up and running again. One of the things about the cold weather we've been having, it drains batteries. Especially when you don't drive the car often. Hope you are all well and happy there in sunny Florida!

I will try the numbers when I can find my calculator I can't do it in my head. Lol. I think I might be getting old'der. It's cloudy here but not cold. I'm waiting on my flexible water hose that I ordered a while back to come so I can do some outside cleaning. We have hoses’ but they are heavy to pull around and they said this one is so light. We'll see!. Take care. Jean

I do love numbers. Funny you are giving away a magic trick. And I like Louis reply - why not Obama does? lol Good one.

I think Sherry is on to something, listen you her.

I love numbers, too.
I have heard of these number "tricks" before, but I had never stopped to think about the logic behind them. I went through the formula step by step and understand the reasoning now. So kool!!
Sherry is a mathematical genius.
:))
I'm sure that she is a genius in all areas; you two sound wonderful together.
Hugs to you both.
J.

It worked with guessing my age with the numbers, but since I'm a lady and a lady never tells her age......but it did work!

LOL with thinking if you had checks you still had money. Son said that years ago when I told him we didn't have money for something. He said "just go to the bank and use your card and get some more". I had to explain we had to put money in the bank before we could keep taking it out :)