Some things Make you Laugh

I have a cousin who lives in Las Vegas. He is working on a system so when I go out there we can both get rich.  Anyway being kin to me you know he cannot be exactly ‘right’.  He sent me the following picture, captioned, “I thought of YOU”.

Of course I thought of ‘Louis’ and Joe. 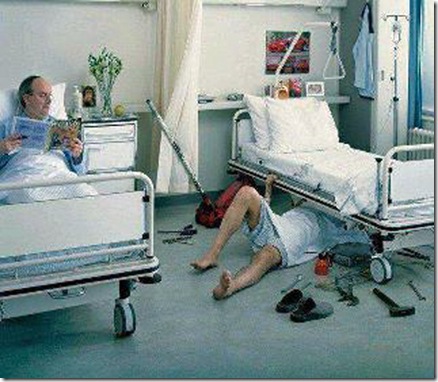 (Do it yourself-er in a nursing home!)

I have tried my best to quit,

But my  frustration bleep is: $hit.

I received this from Friend  ‘Buddy’ in New Mexico.

… He said if I didn’t laugh at this to have a couple beers and take a few days off…. I didn’t have the beers nor take the time off, how do you fare: 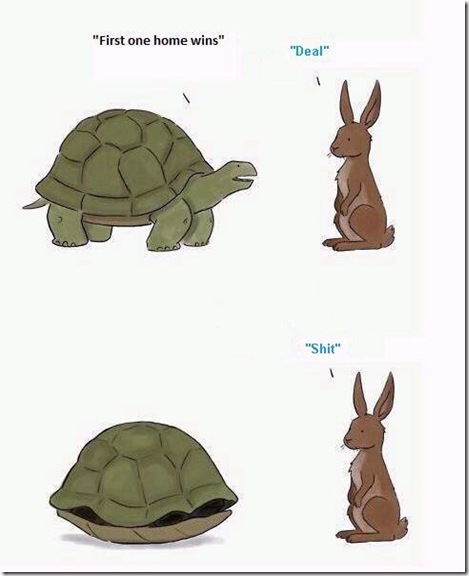 I even laughed again. I bet Paula laughed, that is her turtle.

Once two of my nephews came to visit when I was a teenager. The oldest and I got into an argument. Later that day, Stoy (the older) told his younger brother about 3 or 4 years old, to go tell Jackie to “kiss my ‘B-U-T’!”

I was in the house with the rest of the family, Woody walks in and in a loud voice says:

Until my mama’s death she would tell that and crack-up laughing. That was the closest to ‘cussing’ that was ever in mama’s house.

We have noticed some of the worst moments of a journey, turn out to be the most told and remembered. They are usually funny after the fact.

---Like me getting back on an interstate going South instead of North.

---Losing all hydraulics (brakes & Steering) going down a mountain.

PS:
It is a waste of natures teachings, not to learn SOMETHING from our mistakes. 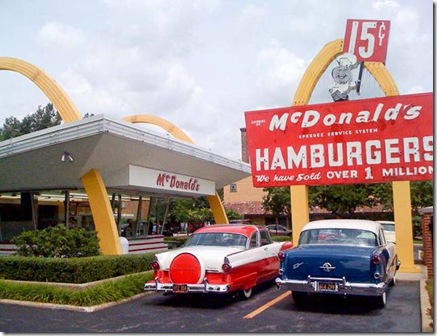 We bought a dollars worth of these going thru St. Louis and added mayo lettuce and tomato. DELICIOUS, it fed the family!!!

Funny ones, Jack...
And I shiver at the thought of losing those brakes going down the mountain.
NOT a good thing at all...

It's very true that we often laugh the hardest over things that happened in the past and the wonderful thing is we can do it over and over again. We do it often here, telling some stories of what happened when the kids were growing up. I'll never forget when one of my kids jumped up on the table and did a rendition of you ain't nothing but a hound dog... Good memories and good laughs make for some wonderful medicine indeed!

You have not lost your sense of humor even with all the spam and junk. I am on my last nerve so your blog made me laugh. Thanks!

I really enjoyed those Jack and laughed my head off. You have a good sense of humor...

Yes, thanks for the laugh's, Jack! Savor the moments - and forget the pain, especially if you escaped un-scathed. I love the idea of the book cover with the couple silhoueted over that sunset. Where did the guy finally find love? At McD's? Ha. I hope it's o.k. fo me to borry that mechanic in the nursing home pic as I have to share it with Wil. He looked just like that helping me install the new dishwasher for Frances this week.

What I really needed.

Mc D's are closing various restaurants over here. Must be years since I've been to one as well.

Please have you all a good Friday.

Jack do you remember that Dad
stayed 42 for about 6 years. When
someone ask him his age it was 42.
I ask Mother how is Dad staying
42.

I remember 2 jokes he told all the
time. One the drunk was standing
up against a telephone pole. finally the Drunk fell and He said
"just lay there I have helded you
up all day. The other one was a drunk walking with one foor on the
road and one on the sidewalk and
a man coming by and took his arm
and side man get up on the sidewalk
and the drunk said "Thank the Lord
I thought I was crippled. Speaking
of life's older things. Didn't
mean to get so wordy but talking
about older thing in life.
Thank God we had a good life.

I had to laugh with the turtle and the hare, too cute! Wow, that had to be scary to lose brakes going down a mountain road; I'm sure lots of prayers were being said for safety!!

if you get rich in Las Vegas, be sure to remember your blog friends :)

(thanks for the kind words about hubby's and brother's song; they do have a bit of talent I think :)

I knew my turtle could win the race. Laughing @ the jokes. Kids say the funniest things.

That "car guy" is really funny! As you saw, it made its way to the Friday Funnies!

You know, now when I see turtles I think of Paula :-).