America the Beautiful, including the USA 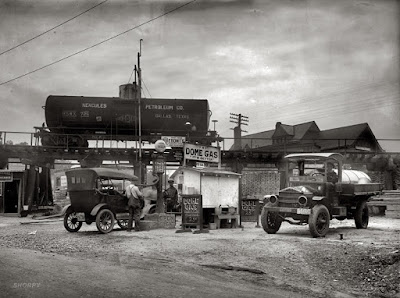 Service stations of the past
For now:
I am thankful for the USA. We in the USA often refer to ourselves only as Americans.  Of course we are, we are located in North America. Actually Mexicans and Canadians are as American as we are.

We have traveled some in Canada and very little in Mexico. I am sure there are national treasures in all of North America, we have shied away from finding them in Mexico due to the bad PR reports by travelers there.
(Our boys and I in Bar Harbor) 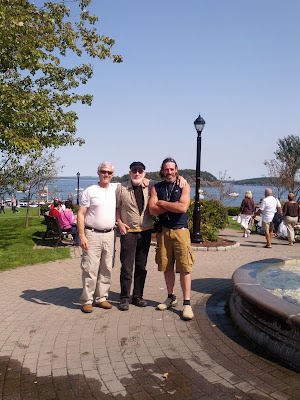 (My buddy Sonny and I just outside Falmouth, Nova Scotia, before the time of digital and phone cameras) 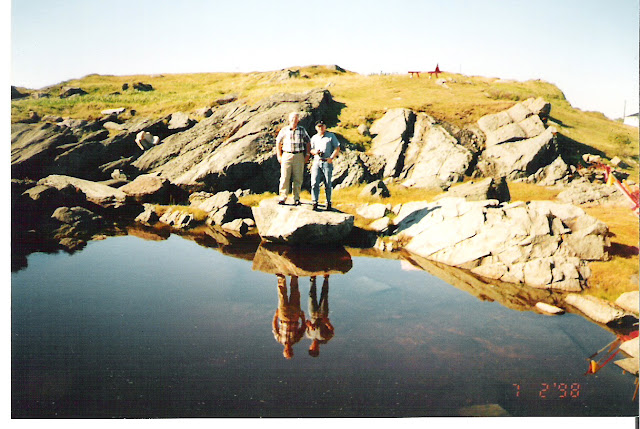 We have only been to a few of Canada's Natural Beauties. What we have witnessed is truly beautiful OR amazing. A few years ago there was a Ferry that regularly traveled from Bar Harbor to Falmouth Nova Scotia. We took the trip two times. Then we drove to Nova Scotia once. Falmouth is a beautiful place. It is also the birthplace of ‘It’s Beginning to Look a Lot Like Christmas.’ Meredith Wilson wrote the song in a local Hotel there.

Now travel with me across Canada. It appears that every Canadian had just mowed their lawn and painted their houses, Canada is neat.

BUT now just imagine the wilds of the Canadian Rockies, then the less populated Yukon. Absolutely breathtaking. 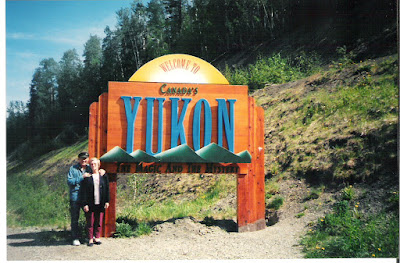 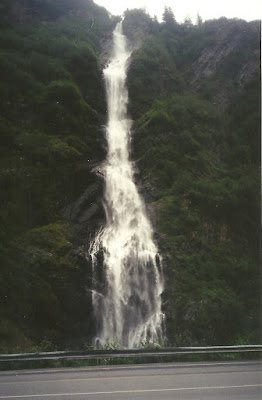 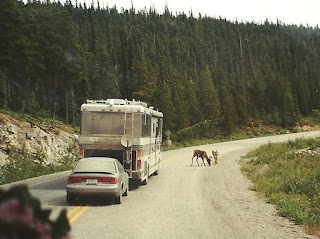 (Moose on the ALCAN, picture taken by my sister from their coach note that dirty coach!)


. Driving further north, Ah yes, and the origination of “The Cremation of Sam McGee.” If you haven’t read it you should. Robert Service wrote:

There are strange things done in the midnight sun
By the men who moil for gold;
The Arctic trails have their secret tales
That would make your blood run cold;
The Northern Lights have seen queer sights,
But the queerest they ever did see
Was that night on the marge of Lake Lebarge
I cremated Sam McGee.
Now Sam McGee was from Tennessee, where the cotton blooms and blows.
Why he left his home in the South to roam 'round the Pole, God only knows.
He was always cold, but the land of gold seemed to hold him like a spell;
Though he'd often say in his homely way that "he'd sooner live in hell." … … ….. …..
As we drove past Lake Lebarge on the way to Alaska, I quoted what I knew, over and over. The poem continues for many lines, but I am going too long and so I will continue tomorrow about the USA, if I remember, or something else doesn’t come up, or …. LOL  as one would notice, I am a fickle writer!
Nite Shipslog
Posted by jack69 at 6:44 PM

Hi Jack and Sherry! Sorry for being so late to the party; too much Thanksgiving methinks!
First, you really 'got' me (Tom, too) with your telling of that young man in church reciting his blessings. Tears! BTW, did you see where you made Sean's column this morning? Woo-hoo!!!

OK, I don't know what's going on with my computer, but it seems I'm speaking in triplicate! Nowadays there's little that would tempt me into even considering a Mexico vacation; but ya. I'd love to see Canada once more. That little ferry? My mom journaled about that in her travel diary (ca. 1958?) when we took what was called the "Blue Nose" (ferry). She even saved the little seasick bag I brought her 'just in case.'

I hope y'all enjoyed a super Thanksgiving dinner with Mark!

That old country song I’ve been everywhere, comes to mind.

I forgot to wish you and your girl a Happy Thanksgiving.
R

I'd want to go to Canada sometime. Not crazy though about traveling to Mexico. I know lots of people do it, but I too have heard the horror stories of some travelers so that keeps me away.

I would love to visit Alaska!

you have seen so much in your travels. beautiful scenery for sure.

I, too, would Love to see Canada once more and to stay a while, as well as Alaska. Like Mr. Watson says, I've been everywhere, does come to mind.
I always marvel at your travels and ride right along through your tales.
Thanks for letting me hitch a ride in my dreams.
love n' hugs from up north where the rain has nearly melted all the snow but left the driveway a dangerous skating rink :/