Tetons and a tight squeeze 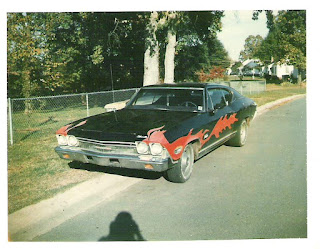 For tonight:
(I know I am repeating myself tonight and in the last few entries, but keep in mind I am reaching the senility age!)
I started last night to talk about the places we have enjoyed in the USA and got side tracked. I put together this make shift computer desk with our computers side by side. Sherry’s monitor is on and the screen saver is OUR PICTURES.
Just now a picture of Mel’s Diner just popped up. It is in South Bend, IN. we ate there while visiting the National RV Museum and the Studebaker Museum.  (No one said ‘Kiss my Grits.’) We also drove over the beautiful campus of Notre Dame.
I could sit here and review the pictures. As a matter of fact many times we sit back and view the random pictures of where we have been. Memories kick in. While sitting here I have seen Holland Michigan, a horse race in NY, Scenes from Salt Lake City and Rice fields in Arkansas, that I did not know existed until we visited the small town of Lapanto, AR.
The Petrified Forest just went by, now the Corn Palace in South Dakota.
This is not what I planned. We have made several trips around and through the USA. We have spent time in every state, not as much as I would like, but we have been there.
The park gate  in Jackson Hole made of Elk antlers. 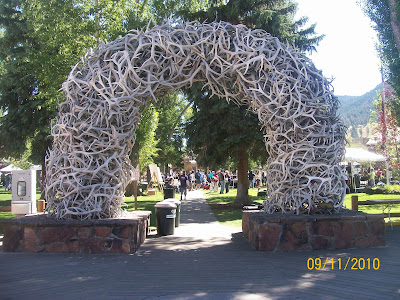 Once we were in the Yellowstone and drove down to Jackson Hole. (One of Rick’s favorite places) We saw the Grand Tetons and started back to Yellowstone.
(The Tetons) 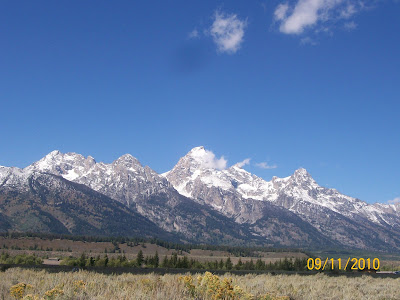 My girl, the map reader, spoke up, “Hey honey, Idaho is our last state. I see a road that will take us there. Turn left at the next road. I did. This is the gospel truth. The road went from two lane pave to two lane gravel then to one lane dirt. “At least it doesn’t appear likely to meet anyone,” Just after I said that, we met a truck towing a 5th wheel. I said, “someone is crazier that we.” I moved into the woods and we slowly passed.
We came to a nice lake with one fisherman in a boat. His rod was bending, he had a big fish. I stopped to watch the fight. He brought the big fellow in. I have no idea the kind, but it appeared to be 20 lbs when he netted it. The road got wider and we did get into Idaho. So we touched our 50th state. But not enough to say we had been there. It would be a few years before me made it to ‘The Craters of the Moon’ and ‘The Idaho Potato Museum.’
Maybe tomorrow I will say more. I am at least completing my original idea.
Nite Shipslog
Posted by jack69 at 6:38 PM

You surely have been "Blessed: with your travels and what you have been able to see in this great country, I have raveled from Maine to Florida, have flown to Texas to pick up Prisoner, been stationed in New Orleans and seen Burbon Street, been to Canada. Always wanted to get out West but chances of that are slim to none now. I have enjoyed all your Travels, books, comments and being able to say, I know Jack Darnell !!!!!!

You are such a good writer. I enjoyed being on the trip with you.

I always wanted to visit the Corn Palace in S. Dakota. Just a farm girl here, I grew up surrounded by corn fields.

The Grand Tetons surely are grand! And no words can adequately describe Yellowstone. We enjoyed seeing both of those areas when we lived up that way. I've been to a lot of Western States and drove through a lot of states from Oregon to Washington, DC, but haven't visited much of the eastern states or deep south. Maybe we will, maybe we won't, but I'm sure if we did it would be enjoyable.

Your travel stories and sights never cease to amaze me. Having been in only about a half dozen or so states, I love to see your pictures. Having all those wonderful memories right on your screen savor lets you relive them again and again. The best thing of all is that you've seen them together! Love and hugs from Ohio! Hope you have a wonderful Sunday!

The closest to any of your travel places that I have been are right here on your blog. Always fun interesting stories....
So where were going tomorrow?

You guys come back to ID anytime! I'll show you around ~

I don't think it was Idaho, but my father did the same thing one time so his daughter could say she'd been in all 48 contiguous states! (Years later I made #49 and #50.)

I thought the Rockies were/are great, but the Grand Tetons look amazing!

Hey, I know that car! and '68 was the yr. I graduated HS. I haven't seen all our great states, but I have traveled to the south and east. So I've seen or at least driven through 21 states and lived in 3. My favorite states were KY, CO, NE, MI and of course, WI. We DO live in a beautiful country. I've always thought of putting our pictures out as a screen saver but haven't had the heart to take Daddy's favorite river fishin' hole off just yet. :)
loven'hugs from up north...we have weather warnings...accumulative snows coming in.......grrrrr. I used to love it more!