Just riding around. Was that really fun? 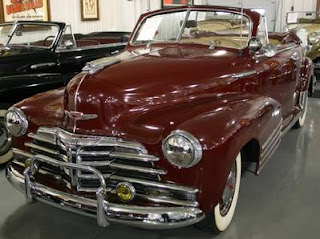 The famous 1948 Chevy. I loved it, but I turned it over and lost my license. While waiting for my license to be given back I decided to join the USMC & wait. Dad sold the car to my cousin Ken.

Looking around today I see young folks riding around in cars. I ask myself, “What is so much fun about that?”

Sometimes on the road I see a couple where it looks like both of them are trying to drive the car, they are so close. Now, immediately I understand that!!! My straight drive car had ‘Sherryamatic’ drive. Me on the clutch, Sherry handling the stick shift. She was pretty good at that. Once Vondale was driving using Martha Matic, and instead of second she got it in reverse. That was fun!!! Now when girls were involved it was even more fun, we called that ‘dragging main’ I think.

Then I start reminiscing, how cool it was for us guys to cruise around in our dad’s cars. Just wasting gas, but ahhhh what a feeling of freedom. My dad bought my first car. I was the only child in the family that got his own car. Man I was cool. Then Tuck, Buddy and I could ride around with the rag top down and have a ball. We could sneak a cigarette and it would not smell up the upholstery. But yeah, when I think back, I can remember such a great release of feelings. Just cruising.

Thanks for coming by the Shipslog.

PS:
When tempted to fight fire with fire, remember that the Fire
Department usually uses water.
Works well for them.
Posted by jack69 at 3:40 PM

Coming from a large family.........neither of my parents drove but I was thrilled when I got my license at age 16!

Please have a safe road ahead and a good start into the weekend you all.

My best friend's parents let us ride around in thier little coupe. We always had to stop and add water to the radiator.

of course back in the days when you guys cruised around, gas was not over $3.00 a gallon. Nowadays its too expensive of a hobby :)

Sure can't sit close in late model cars. No crusing people drive to fact even through town.

I like that drive system you and Sherry had - but now it's seat belts. Did some cruel old spinster campaign to have those things installed because she didn't like it? ☻ Ah, but those were the good days while they lasted - and - gas was never higher than 24.9 cents per gallon until after we got married so we could ride forever it seemed!

Cute entry. In our town you drove around in circles "cruising" trying to find one another. Then you'd go eat, or go to the show, or go sit in a parking lot and talk to everybody. lol

I think we all did it. Gas was so cheap then that it was an affordable way to spend your time. Then we had the Sunday drives too. My dad would take off without a destination and drive for hours. I sure did see a lot of beautiful Ohio when I was young. I hope your Saturday is a great one!