I can’t remember thinking whether boys liked me or not. I guess I just assumed they did, we played together and seldom fought. We just played. I could have a couple, or even more ‘best friends’, and usually did. Playing was no problem. Up until 5-6 I played ‘cars’. Usually none of them were real cars. Just blocks of wood that were my cars. My Dad was from a family of 11-12 kids. He was the oldest so his youngest brother was my uncle even though he wasn’t much older. Ralph knew how to play cars, Grandpa and Grandma lived on the Art Cloth Mill Village, and their house was high in the front, maybe three feet off the ground an ideal place to play cars. Ralph made a river with bridges and a small town to drive in. Ralph always amazed me with his ingenuity.

There was a time when I started wanting girls to like me, which was tougher; they did not like to play cars, cowboys, war or shoot marbles. They liked to play dolls and have a play house. I have done that, but not with other boys around. Hahahaha! 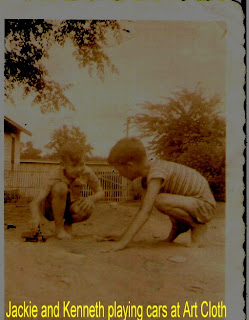 It is funny looking back at grammar school. I really don’t remember the teachers having a discipline problem. I was pretty rambunctious, and I did carry a note or two home to mama. But all in all we kids knew the teacher was the LAW! I feel sorry for today’s kids who have to be ‘doped’ or practically sedated to be able to mind in class. I look back and wonder was I like that or my friends? For some reason all it took was a look from a teacher to calm me down.

One thing I always liked was impromptu baseball or softball games. I wasn’t that great but I was not chosen last (many times, ha!) In Belmont my first girl friend had a brother my age. He could play ball, when I was on his team we won! Harold finally went to play with the pros. He was just inducted into the local hall of fame last week. Now girls liked boys like Harold, the sports heroes. 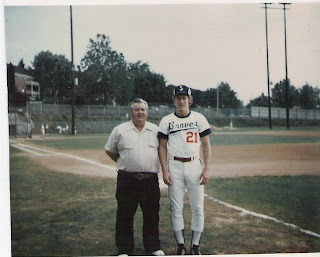 (Butch and his dad, Lefty, Sherry's oldest Brother, he too was into sports and coached a little league team all the way to the LL World Series))


My Sherry comes from a sports loving family. I have at times wondered why I was lucky enough for her to go with me. She had a member of her class to go to the majors also, Jimmy Hall. Sherry’s nephew Butch Harris, is in the hall of fame at this College and our local hall of fame. Sherry follows some teams and scores, I don’t. She married me because I am so exciting, I guess. (Later, I did roll a mean bowling ball!).
Hey but give this kid a weapon, pistol or rifle, I am at my best. A proven expert (High shooter, USMC 1956)!


And a LOVER, hey sports? I do have some good points; I just like the indoor variety,

uh.uh like bowling or shooting pool!!!
Thanks for coming this way,
Nite Shipslog
PS:
'Tracers work both ways.'
- Army Ordnance Manual-
Posted by jack69 at 1:15 PM

Joe said to tell you that you can have his cold, but you let him keep to much.

I think all boys love to play with cars, it must be built in their DNA or something, LOL! seems like you had some great times growing up and playing with friends. (secret between you and me and Sherry, son used to have a girl friend in kindergarten that when he went to her house to play, they would play with Barbies :)

I think those impromptu sport games are always so much fun; wonder if kids even do that these days!

And you are right, we knew the teacher was the law and there wasn't much we tried to pull over her eyes

I think it is awful that they as you said "practically sedate" children today in schools.

We never had that problem when we were kids. Some kids were more active than others and the teachers handled it just fine.

I remember my brothers playing "Cars".

I was almost afraid of my teachers but it was
respect. Teachers can't do anything today
because of rules. It is a real shame the
students don't want to learn. I feel sorry our
teachers.

Growing up is one of the hardest things to do. I'm still trying, but somehow it eludes me. Or maybe what I'm feeling is the "2nd childhood" I've so often heard of. I played "cars" with wooden blocks. We sometimes made "tractors" from old thread spools by carving notches around the spool, then using a rubber band attached to a crayon as the driver to move them forward on the ground from three to five feet at a time - depending on how tight you wound the rubber band. "Cowboys and Indians" with pieces of wood from the scrap-pile for guns; and sometimes with nothing - just imaginary guns and home-made bows and arrows entertaining us for hours. We played "marbles", but couldn't play "for keeps" for that was considered gambling! And you left out "hide and seek" and "kick the can" and "May I?" Then came the slingshot, for "hunting" games. What memories you conjured up!