Below is one of the Metropolitains we owned. I loved these little cars. This one happened to be a Hudson Metro, most of them were Nash Metros. I don't think I ever took a picture of it clean. 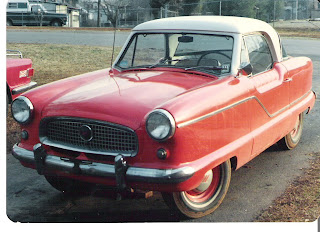 Now for todays super entry:
The other day I bought this super invention! Or at least I thought it was. Lady said that is one of the best Thermos Jugs you can find. It really keeps Hot things hot and cold things cold. I asked how, she said it was a scientific thing.
Don’t ever believe a clerk; they just want to sell stuff.
I tried it on the short job I had the other day, it was a mess. I put my popsicle in it so it would stay frozen, and added a cup of coffee because I like Hot coffee and popsicles. Folks, "You cannot trust Clerks."

There is such a thing as truth in lending and truth in advertising law, neither work!!!

We headed South today, a great ride good roads and beautiful scenery. We are in Castleberry, Alabama. Sherry and I just came back from a walk up the county road. Cows came to the fence, I asked if they knew Paula down in Texas, They answered but it was southern cow talk, you know how rough it is to understand us southerners. I asked if they wanted some cubes (not knowing what the heck I was talking back, but I know it is cow talk because Paula uses it.) They acted like they did, but then I really did not have an cubes (I don’t think).
Horses were on the other side of the road, I love horse, and these were beautiful. Don’t get me wrong, those were pretty black cows too. I think there a lot of pecan trees around here. This is pecan country. Of course down in South Georgia and here they are ‘Pea Cans’.

There is an old general store and service station, long since closed about a tenth of a mile up the road. Here in the park is an ancient barn, I must get a picture of it.

Tomorrow is election day, we will see how it turns out. We voted a week or so ago absentee. I hope you vote early and vote often. Hahahahaha (especially if you vote my way!) hahahaha
Thanks for coming this way,

not first take from somebody else.

ha! I got the "confused" part of your blog - but can't imagine you being upset. Anyone who advertises that a thermos will keep both hot and cold just never tried it. ☻☻☻ I am a bit envious (forgive me Lord) of this particular trip. Please let Brother Matthews know I am sorry I could not come. And of course any of the others that are there - I'd love to sit down with some of them and chat over a cup of coffee from that thermos (without the popsicle)! Be safe!

You probably put the popsicle on the wrong side...can't believe you will meet my parents before meeting me...after I moved to NC and everything..ha...Shirl and I will have to get together while you're gone and plan some things for payback... I need to check a map, I can't figure which way you drove to end up in Castleberry...Take care and drive careful, Sheila

I want a Hudson Metro ~ cool lookin' car!! I'd trade in my Taurus in a heart beat ~ if it has AC, anti lock brakes, cruise control, auto windows and trunk, auto adjust seat and rear window defrost (that's a biggie in my book). I can certainly see your loving it!

You and the thermos ... what a character! Have fun on your little excursion and keep it between the ditches.

Sheila we will plan something, it is hard to
get ahead of Brother. He want let any grass
grow under his feet.

Now I understand dog talk, but I don't know if
I could talk to Cows or Horses. I just remember
being chased by a Cow once when we cut through
a pasture. I can tell you that Cows don't
understand people talk.

Hope you have a safe and nice trip. I will try tp keep things going until your return.

seems like you are enjoying being south especially taking time to talk with horses and cows and trying to learn their language!! too cute about the thermos, I'm sure you just need to go back and read the instruction book where I'm sure there is something in there about not mixing hot and cold together :)

I'm voting tomorrow, but not much of a choice available here.....

I'm with Mel -I like your 'little' car. However I LOVE my 'big' Yukon. Bigger butts call for bigger seats.
Those dang clerks - they remind me of doctors. I once had one ask me if I had any loss of appetite, I said "look at me, are you being a smart a** or what?" LOL

The mixture of a Popsicle and hot coffee would confuse any thermos I think...Glad you are having good weather and good roads there. That is a blessing. There is a shortage of both here in Ohio. 37 degrees this morning is a bit chilly. Take care!