Okay it is Halloween, answer the door!!!


I came along before trick or treat made it to North Carolina. For Halloween we made our own contumes and walked down town. Soaping windows and in the smaller towns I lived in, we tried to guess who was in what costume. Naturally there were more Hoboes’ than anything, ragged clothes and soot to make beards was easy to come by. Most folks just used a mask from the dime store. I don’t know what they were made from, but they had a specific smell, not a stink not a pleasant smell just an odor.
Pirates were also plentiful. 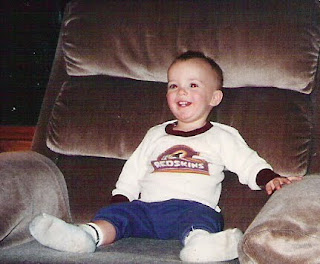 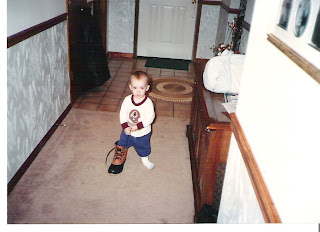 (I just included the pictures of Matt (our college guy now) because he made such happy looking pictures!) Not Halloween.)
But the most fun I remember was a teacher in the fourth grade, letting us make our own masks. We brought clay or mud to class and wax paper. She taught us how to make the mold to nearly our fface size. Then we brought some flour and an old news paper. We cut the paper into strips and dipped it into a paste made from flour. Laying it over our mold. We kept doing this until the mask was about ten layers thick. After it dried we got to paint it with water colors. Once it was complete we lifted it off the mold and had a great mask for Halloween. I will never forget that class, that was neat.b 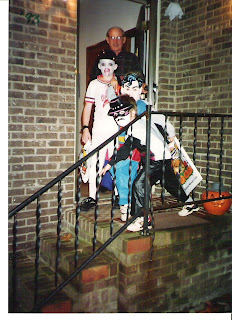 (Jack's sons, Ben and the Twins (No I don't know which of the twins is which nor do I know what they were)) 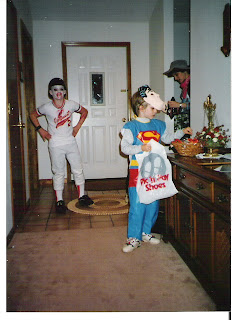 (Ben in the back ground, and I know that is superman in the front, could be Steve!)

Halloween is a festive time, noise makers and masks. I don’t think there is as much mischief as there used to be. We did soap a lot of down town windows. Some of us swiped some of mama’s canning wax, (mama melted it and poured it over her jelly.) and waxed windows, It looked like soap but it would not wash off. (I know that was mean). 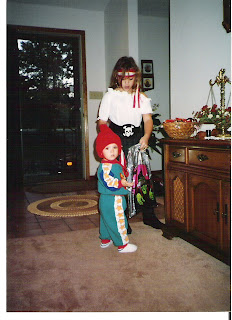 (This is Reece and Matt (Before Luke came along))

Once in Valdese the merchants offered their windows as a surface for artists from school to paint Halloween scenes on them. Some were rather good.
This is a fun time for kids, we always loved to see the grand kids come by to show off their costumes.
Nite Shipslog
PS: Thanks for taking the time to stop by the log.
Posted by jack69 at 1:02 PM

Happy Halloween. I hope there are no tricksters coming my way tonight. It is a great time for the little ones and for us older ones that enjoy seeing them too.

Do they trick or treat at your type home? Cute kids and costumes you show here.

Just checking in to see if you've overdosed yet on chocolate? Quit eating the candy ~ it's for the trick or treaters!

Hey there! Halloween here and the candy is ready. We are not big into Halloween really. But we decided to have candy ready for those little tots who would like their treats. Have seen some scary Halloween pics on Facebook today. Enough to make me glad we are home. A lot of folks celebrated with parties last night. Hope you all have a great night.

Oh what memories! Mean-ness abounded back in our day. I'm thinking of Campaign, TN...People would turn over the outhouse, drag the farmers wagon up on top of the barn, pile hay out in the streets where the poorly lighted vehicles were apt to run into them, break bottles and strew them across the streets, Throw out a whole box of roofing nails into the street, etc. Now that was mean. Course there were not that many cars in most of those areas. Of course we would never put wax on a man's windows. Might throw a few raw eggs thos. ☻☻☻

I like the idea of the merchants having people paint scenes on their windows! Way cool! And I bet it was fun to see what people came up with in their creativity!

Cool with the mask too! But I'm thinking with that many layers it had to be a heavy mask??

enjoyed the pictures you shared; always fun with kids and costumes, they get so excited dressing up!

Living out just a bit from town, we only had trick or treaters when the kids were still in school. This year, we had exactly zero, zilch visitors so we will have to regretably, eat all those variety Hershey bars All by Ourselves. I am so forelorn at the prospect. Hope you and Sherry had a great night with the kids.
BlessYourHearts

We have had one trick or treater and that was my great gransdaughter. I got a pic but have not checked the camera.

Life's good. Thank you for this happiness-filled entry of yours. Please have you all a good start into the new month, week as well.

Great pics of the Grand kids. Jarin made a mask in 6th grade, with a balloon and paper mache'. She didn't wear it for Halloween though, and we still have it. Have safe travels as you head out tomorrow. Take care, Sheila

Hope everyone had a good Halloween. Glad it is
over. I am ready to get back to real life.

We usually have at least 100 kids stop by but ths year maybe half that amount showed up. I have a super sized sweet tooth that I inherited from my Dad - so eventually the excess candy will disappear. Have a great NOVEMBER!
'hugs from afar'

I never get trick or treaters here so I go over to my daughter's house and help them. Her husband loves to decorate the exterior for them. They had well over 400 kids last night! And I didn't get a bite of candy! I did take a pumpkin pie with me and we had a slice after it was all over.