Ruth on her 87th birthday! 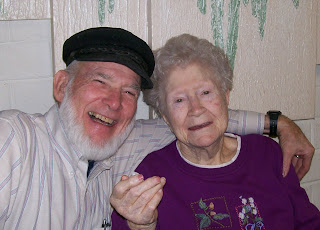 I have no idea what to call it. In my mind I say death-watch. Ruth is more resting than anything. She doesn’t seem to be hurting, just waiting. Yes, waiting for her journey of 87 years to come to a close.
I haven’t spent a lot of time there. Many of the family was there. Grandkids were there that she has taken care of and loved. They all adore ‘Nanny’.
I asked a question while everyone was there and Ruth had drifted off into a deep sleep, “Has anyone here ever saw her lose her temper, or yell in any kind of rage?” No one had ever heard her raise her voice in anger. (She was also a red-head in her youth; I thought they were prone to have a temper.)
I told some stories that only I could know, no one else was old enough that was there to know Ruth when she was 19-20 yrs old. Helen mentioned that ‘Nannie’ did get a little excited when little Amy locked her out of the house once while she was baby sitting her! We all got a good laugh out of that.
Helen, her dedicated Daughter-in- law, stayed with her last night and we relieved her for a couple hours today so she could go home and freshen up. During that time I sat and held Ruth’s hand and though back over as much of our lives as I could. She was always precious.
We laughed when I asked if she ever got over her fear of lightening, everyone said, “ NO!”
As a child I spent a lot of time at Ruth’s house, which was MY summer vacation. If a storm came up, She would wake everyone and my Oldest Brother Odis (husband) would drive the A model or whatever car they had at the time, until the storm subsided. Someone had told her lightening could not strike a car. I never understood why it had to be rolling.
Life was different with Ruth, I was just a little older than Howard, her oldest, and she treated me just like a son. I got the spankings the corrections just like the rest. Funny thing about Ruth’s spankings, they only hurt your feelings, she had a way like that.
As I said in the beginning, I don’t like to say death-watch, but that is what it is. I will never again have a conversation with Ruth. I will never laugh again as she makes one of her ‘off the wall’ comic statements, without knowing she is funny.
Thanks for coming by the log
Nite Shipslog
PS:
A clear conscience is usually the sign of a bad memory.

I remember Ruth had to always cook you a meal.
No matter what time you would come to her house
she was cooking. When we were children playing
outside she didn't want you to get out of her site. She was very protective of all children.
She was a lovely lady.

hugs to all, it is good that there are many around Ruth during her final hours; I would hope she senses and knows the love that is there and that her passing will be gentle and peaceful. thank you for sharing memories about her, Jack; she seems like a wonderful woman. Had to laugh about her fear of thunder (not unkindly of course) but my grandmother had the same fear; didn't get in a car but always wanted someone with her during storms

you all take care of yourselves.....

Seems Ruth is a beautiful woman inside and out. I'm sure she will be missed so much but there are the memories.

Sounds like she has had a wonderful life. I am not so far from her age and it stopped me in my tracks, I guess I must think I am invincible but this entry woke me up. I think Ruth even hears some of you. So glad her family is with her.

Jack and Sherry, two angels who warm and encourage the hearts of suffering people wherever they are found. God bless you for your service to Ruth and to her family.

How in peace with oneself one has to be, being able to wait.

A beautiful tribute to life.

Please have you all a good Sunday.

I feel for you. I've been on several bedside death watches. I'll keep you in my prayers.