After all, everyone makes a bad picture sometime!

Just a couple of pictures. Sherry thought she was catching ME at a bad moment, that was really my cousin Bobby looking confused because Mike was explaining his hearing problem, as you can see Bobby don't understand! 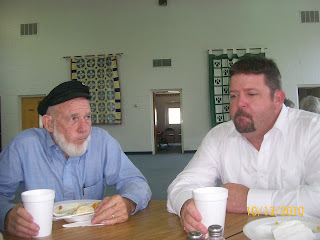 Once shaved my head (back when I actually had hair) in preparation for hiking the Appalatchian Trail. Just after the skin head act, my brother in law Dick (whom I loved dearly, had the audacity to die) I had to attend the funeral as a skin head.
Below is one of my heroes. Ted Darnell, he came in with a Mohawk hair cut. Now I had to be honest, back when I had hair, I ALWAYS wanted a Mohawk hair cut. If I couldn't be a cowboy, at least I could try to be an Indian, but it never happened. 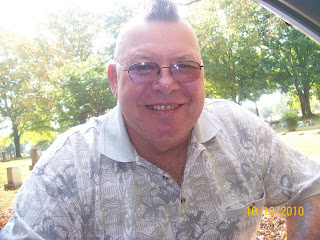 Ted is a Marine, you don't say ex-, because the fact is: 'Once a Marine, Always a Marine' (yeah we know it could be once crazy always crazy, but it don't sound as good!). Ted hasn't been in the best of health thanks to 'agent orange'. We got to see his brother Joe at the receiving the day before. Joe is a little more sane, most of the time.
Now if you consider the Mohawk crazy, you should meet Ted's wife, Peggy.
*
*
*
*
*
*
Jokes aside Peggy is a great gal, Ted just can't keep her quite in line!!! (Don't throw stuff Peggy, remember your health!)

Peg couldn't be at the funeral, she is not in great health either.
Thanks for coming this way, We B tired again tonight. Probably Sherry's age!!!! LOL
OUCH! STOP IT!
Nite Shipslog
PS:
We never really grow up, we only learn how to act in public.

the cool thing about hair is it will grow back, might take a bit but it does grow back; so it is always fun to experiment and try different styles (provided one is brave to do so :)

get rested up you two!

I'm glad to hear we never really grow up, that we just learn how to act in public. Because I really don't want to grow up and act like an 'adult'.

I agree with the Marine always a Marine. Well, I guess I agree they are all a bit crazy and some are crazier than others. My son's best friend went in the Marines and he was always a bit crazy ... now he's more so! We still love him! =)

I'm back in bloggerville - not sure how often I'll write. The goal is to post on a fairly regular basis. =) Anyway, it was good to see you and Sherry are still doing well.

I would think you all are just tired out. Hopefully you can relax and get some needed rest soon. Take care!

Maybe it's time to just slow down 'a hair' and rest a little. I'm sure Sherry will wait for you to catch up. lol

You are a character! When I saw your picture I thought to myself, "Quit swishing that coffee around in your mouth and swallow it already. Geeze... it's coffee... not mouth wash!"

I don't know why, but Popeye came to mind when I saw the picture...just need to draw in a pipe..Hope you are rested up this morning. I seen where you said people thought Shirl was younger...see it didn't take me long to get the 'facts' out there... :) Have a great weekend, Sheila

I hope things are about to be rested and feel better. Jack you leave Shirl alone. Now this is a warning to you straighten up or you will have me and Sheila to deal with. You know I cant believe that Shirl is related to you. BEHAVE!!!

I commented on Ted's hair the first thing he
said was "Do you see any grey"? He said
"I guess I am trying to stay to young". Also trying to keep up with my Grandchildren is killing me. That boy had a full head of black hair just like his DAD. . He is a comedian.

The mohawk never appealed to me at any time in my life. However...lately....I have had thoughts of the skinhead look again! The appeal for me is when I think of the time I would save from having to style, spray and comb my hair into place now! ☻