(I had a couple folks ask me to recap our last couple months, most of you are familiar with it, please don't feel obligated to comment) 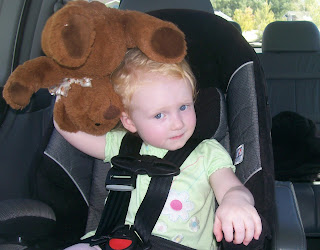 You have to admit, the above is worth driving across country to see!!! 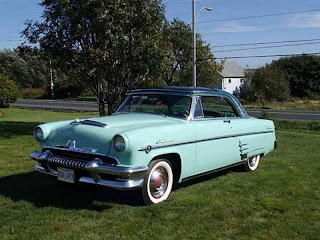 This is a '53 or 54 Mercury (feel free to let me know) I just wanted to post a car! Also the song I mentioned yesterday (Keep it a secret) was sung by Slim Whitman. Thanks to those who e-mailed to tell me.

The above picture was just too cute not to hang here. How does someone get that picture (Probably the BR- Boomer could)!


NOW.... Continuing the trip across country, in review:

We loved St. Joseph, the city that is the home of the Pony Express. We visited the Pony Express Museum there. We tried to hitch up with Joe and Lucy up in Nebraska, but things did not match up. Then on to The Air Force Academy in Colorado Springs, and Pike’s Peak. My second trip, Sherry’s first. We enjoyed it.

We crossed the Rockies and saw some fantastic scenery. Then on to Moab, Utah. There we saw the Arches national Park and the Canyon Park, both areas have amazing and beautiful natural formations.

On to Clearfield, Utah and Hill Air Force Base. This is the home of Carol, Ben’s mom and Elsie Mae’s grandma. We also got to See grandson Corey and his bride to be Jackie. Then there were the other Great Grandparents, Dick and Joan. We got to see them all and had a great time. We especially enjoyed our time with Elsie Mae, OF COURSE.

I had a date with Joan to go up in a Hot air balloon, but I backed out, being cheap! Since our trip Dick has has a knee replaced, now he is running around, I mean moving better! Hahahahaha

Then on to Idaho and the Craters of the Moon, Shoshone Falls, the Snake River canyon where Evil attempted the jump across the canyon and failed. Seeing the beauty of the fields of wheat and potatoes was amazing.

While in Idaho we took a day trip to the Grand Teton, and Jackson Hole, Wyoming.

We left Idaho, and went to LAS VEGAS, there I did not lose any money but got to see and spend some wonderful time with Cousin Howard and Aunt Aggie.

Will continue, and finish tomorrow.

Thanks for coming with us,

Dolphins are so smart that within a few weeks of captivity, they can train people to stand on the very edge of the pool and throw them fish.

Always a safe road ahead for you all - and again many thanks for providing a different kind of map of your country.

That deer picture is priceless.

I'm enjoying the re-capping of your trip; Elsie Mae is just toooo cute!!

When you think about all the things you were able to see, you really did pack a lot into a few months of travel. I love the deer picture too.

Thanks for the shout out.....but, my fawns never hold poses for me....need to train them better....!! lololololol

That child is growing up way to fast. Thanks for quick tour.