I don’t know why, but it was so much fun to fly a kite.  I flew kites every March, growing up. I enjoyed it when the wind would take it on up without me having to run. I have ran until I came to wires and threw the ball of string over the wire and kept on going until the kite got high enough to get a ‘lift’. I have spent hours just lying on the ground watching that kite. I loved to fill the tug. Every once in awhile I would send a message up to the kite. That always amazed me watching the note climb the string. 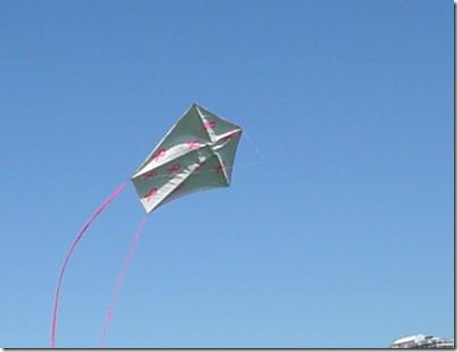 At times the tug said let me go I want to soar! Of course I knew if I let it go, it would make a tail spin to the earth. String was 5¢ for 250 feet. I have tied several balls together. I don’t know the highest I ever flew a kite, but I have sent them out of sight. Coming from cotton mill country sometimes there would be cones of string rejected and thrown away. You could get a ‘cone’ of 2,000 ft. I don’t think I ever emptied one. 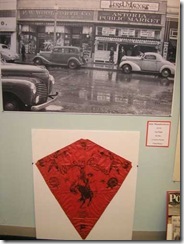 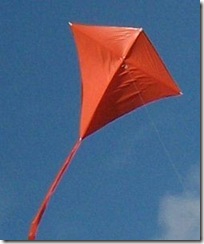 I have always been cheap, I made my kites. The dry cleaners used to send daddy’s suits home in big brown paper covers. That was perfect for making kites. Scissors, mucilage, paper and some rags for tail. I preferred the three stick kite, most of the bought kites were two stick. Two or three guys could put their kites up, stake ‘em or tie to your wrist or ankle, sit and watch them and talk all day of what they were going to do when they got big. 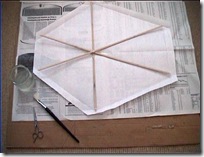 Nothing like flying a kite to solve problems, I think the President and congress should go fly a kite. Stake ‘em out above Arlington Cemetery and get some serious problems solved.

There is no road’s end for a Gypsy. 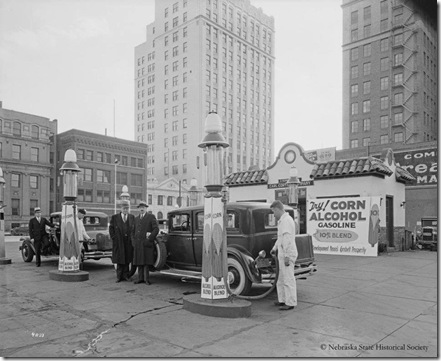 I remember people talking about the changes in pumps. With the above tank your gas was first hand pumped into the glass viewer, 5 gals. at a time. Then drained by gravity into your cars tank.  You could see how much you were getting. Folks did not like the under ground tanks, they felt they could be cheated!

Okay now I have to go to Wal Mart and buy a kite for the grandson and me. That looks like fun!

Just last night I watched an old movie where an aging aunt, played by Patty Duke, and her young nephew were flying kites. What fun they had. I'm sure that flying kites is one memory a lot of us have. There is something just simply fascinating about it. I'm still saying those prayers daily for our government leaders. Best way I know to help them out. It's another cold and snowy day in Ohio!

Flying kites with our Grandchildren is sooooo much fun! (for them and for us!!)
I love the bottles of glue that you showed. Brings back so many memories.
I had forgotten about glue tops that looked like this. I can even remember the smell of the glue.
Isn't is neat how memories are evoked by a fragrance.
Love flying kites...and agree that Congress (especially our President) should do exactly that!
Thank you!
Hugs,
Jackie

Hi Jack!!!! I remember flying a "Green Giant" kite I got from the green giant veggies!!!

Jack flying kites were so much fun.
Remember making the tails. I think
we got Mothers nylon stockings
and made the tail. Then sometime we got material and made the tail.
It was fun until it got hung in a tree or the power lines.

What simple days and so much fun.

Once I wrote a 13 page essay about kites. Thank you for the memories, must be about 14 years ago.

Please have you all a good weekend.

I remember my brother making kites years ago; they always flew good too (until they got tangled in a tree)

wise advise Jack to have our government go and fly kites; lots could be solved I think in an open field watching the kites soaring over our country!

Always loved flying kites. We didn't do very well with the homemade ones. Once as a teen, I was at the beach with my sister. We were near the water of the Intracostal Waterway. The wind took my kite away, and it landed on a little marshy island. I talked some guys in a boat into going out and fetching my kite for me. When they fetched it, they held it up and asked, "Is this it?" I thought that was a very dumb question, but when they brought it to me they explained, "There were lots of them out there."
(I guess I wasn't the only one losing a kite to the island.)

Don't think I ever actually had a kite or made one but I did go a block down the street to a vacant lot and watch Mel and the girls try to fly one. Doesn't seem they had a lot of luck at it.

«Louis» didn't realize that they have been adding ethanol to gasoline going back that far!

We were flying a kite (a sort of complicated one that it took Don for-EVER to put together) with Don's granddaughter over the holidays. It was wonderful fun. And all her squeals were music.

I have been known to fly a trick kite or two...