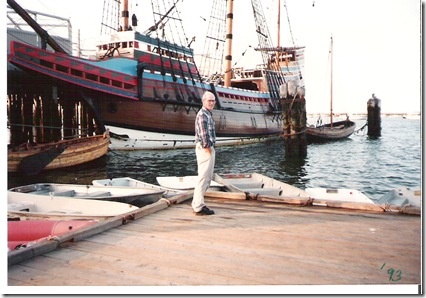 For the last few days folks have been e-mailing and calling me to wish me a happy birthday. For some, it is a FB courtesy, and nice. BUT, I also know I have  friends some of you guys that I have never met, good friends I might add, who contacted me. 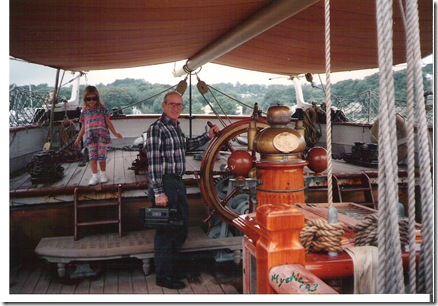 (Me, at the helm of the Mayflower)

When I first started the ‘Shipslog’ (on AOL) I never expected anyone, other than my family to read it, much less comment.  I have said on the Shipslog the first person to comment was ‘Lindie’. It  floored me. She was so sweet and said she  agreed with something I had said. Shucks, I feel in love with Lindie. 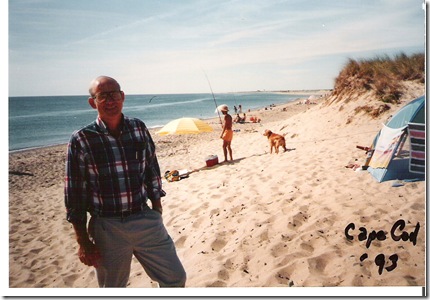 There are some trips that have absolutely blown me away. One was at the entrance of Cape Cod. Rose, from ‘Roses are Read’ was probably a kid up  in the Boston area then! 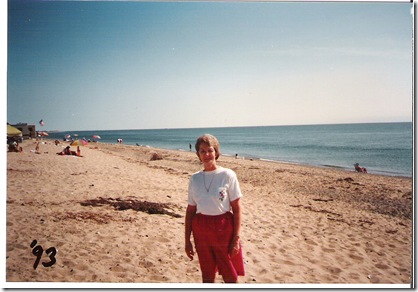 We had a camp site over looking  Buzzard’s Bay. I was on the internet using the cell phone as a modem. Sherry and I were  constantly singing Patti Page’s  ‘Cape Cod Bay.’ I cannot explain the wonderful feeling we had. A song from our courting days and we were actually there.

If you're fond of sand dunes and salty air
Quaint little villages here and there
(You're sure)You're sure to fall in love with old Cape Cod
(Cape Cod, that old Cape Cod)

My entry that night was about Cape Cod  and the direction we were facing. Lindie commented again that night. In her comment she said. “You are looking toward where we once lived. We were so poor then, my husband was in service, I would push the stroller to the Laundry mat, with the dirty laundry wedged behind the baby. But we were oh so happy.”

That night I cried a little as I read it to Sherry. Because we had been there. The same situation.

Last night out of the blue, Lindie e-mailed to say Happy Birthday. She is a Missouri Girl. Lives not far from where THE MAN Harry Truman lived.

One of the memories, of FRIENDS I have never met.

“If you spend an Evening you’ll want to stay!

Here in Bloggersville, with something to say!” 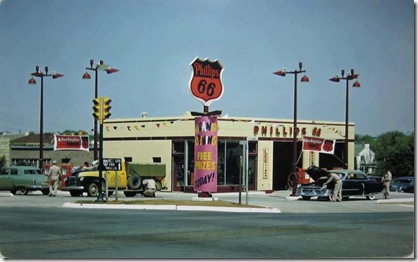 Amazing how many Studs you see getting gas. Also an early 50’s caddy(I believe the gas cap was under the tail light) and a nice Chevy truck.
Posted by jack69 at 12:45 PM

You know Jack - sometimes the best times where when we had nothing...

What a dear friend and wonderful memories too. I do remember that song well. I never made it to Cape Cod, but I love the beach so it was a favorite of mine. Sure did enjoy the pictures of sunshine and warmer weather there on the Cape Cod Bay. We have had some sun today and that's a very good thing. Birthdays are special and so are old friends.

Where do you find all these photos? We had a green studebaker just like in the pic when I was a little girl!
I have never been to Cape Cod but always wanted too, maybe this year! love your blog!

Friendship is a Blessing.

That was neat Lindie remembered your birthday; I know she holds a special place in your heart :)

Love Patty Page, never heard that song, lyrics are sweet.
That Phillips station reminds me of some we saw in the 50s on that long drive from MO to see Gramma & Grampa in FL! So you came over on the Mayflower??? It's time to re-arrange the candles, add some maybe?

I think once being poor helps to be thankful for what we have now. Not saying we're rich I'm for from it, but we do ok. Love the pictures. Take care. Jean

Some of my dearest friends are blogging ones...people I've never "met" in person...but I feel that I know their heart.
I'm so glad that you have friends like these...
Hugs,
Jackie

I didn't know you and Sherry could sing so well.

Love Patty Page's voice...so anything she sang went straight to the heart.
Great pics...makes me miss the Atlantic very much.
As for that last photo....ummm, I was looking for the 'studs', but couldn't find you. OH, you were talking bout the cars...they are wonderful...so much more than today's vehicles for sure.
BlessingsAndLovedYourBirthdayPics
You share your day with Mel

Yes, the Caddy had the gas cap under the taillight.
«Louis» thinks that is a Mopar (DeSoto or Chrysler, probably a Chrysler) behind the Caddy.