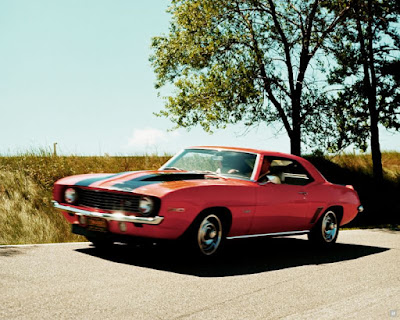 That '69 Chevy Camaro!
Now:
Cornbread, yes right now I am eating a bowl of my favorite foods, Cornbread and sweet milk. I was raised calling cow’s milk before it was sour as ‘sweet milk’, it is later buttermilk after it is churned.  I like cornbread with either one, but I think I prefer 'sweet milk’.  We never have butter milk around here anyway.
Every once and awhile mama would make what she called cracklins, and added them to the cornbread. She did that for Daddy he loved the cracklins. I think cracklins were small pieces of fatback fried crispy. In my opinion it messed up some good cornbread and I picked them out. LOL
Cornbread and milk is bland, but I love it. In the USMC I noticed the cooks baked big pans of cornbread, not as mama did in the iron skillet. But they cooked a ‘pretty’ cake of cornbread. I had to have some. BUT, but something was wrong. It was not mama’s cornbread, it was sweet. Where I came from that would have been a sin. LOL
Now here in the motor home, WE are faced with a cornbread mystery. Sherry always makes a great pone of cornbread.  She uses a 9” cast iron skillet. She also uses the recipe right off the bag. Once we had ‘weevils’ sneak into our cornmeal. So after that Sherry kept it in the refrigerator. So her cornmeal was thrown out in the refrigerator incident. 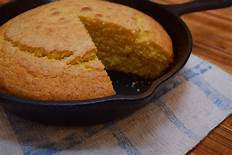 On our first trip to the store she bought the usual Martha White’s self-rising corn meal. But something strange has happened. The first pone rose only about ¾ of an inch. Not even half its normal rise. She was disappointed when it came out of the oven. She assumed she had only used one cup of meal by accident. The bread was still very good.  Now today the same thing happened and she KNOWS she used 2 cups of meal.  What could be happening?  Any suggestions? 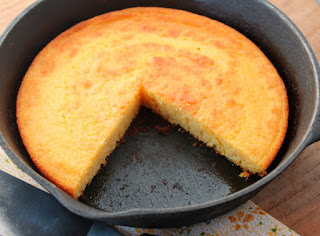 On the brighter side, reckon that means there are only <½ calories in a bowl full? Can I have another?  I love this stuff!
Nite Shipslog 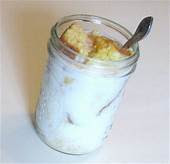 I like it in a glass or jar too!
(Pictures from the net!)

I do love cornbread and make it my iron skillet too. I have tried it many ways in different pans but it does come out better in the skillet. Sounds like your self rising cornmeal has gone flat and needs a little little more baking soda or baking powder to me. I have frozen flour in the freezer and it really works when trying to keep away those pesky mealy worms. Hot and humid summers here do tend to bring them out. You really only need to freeze for about a week and then it's safe to set it back in the cupboard. Anyway I'm glad yours still tastes good and it was not a wasted effort. Your Sherry does what it takes to make you happy for sure!

I love to make cornbread in an iron Skillet like mom did. Its the best with Milk as it has that dark crust on the bottom side that doesn’t get soggy quick in the milk. I like my cornbread to be hot when I ad milk. I only ad a little milk as I like to feel the warm bread with every spoon full.
I have noticed too that the past couple times I made cornbread using the recipe on the back of the bag, that I was rather a flat cake also.
I wonder if we add a little bakeing poweder to the mix if it will rise more.

"Corn Bread" up here is called "Johnny Cake", Would not know it by any other name, Pea or Bean Soup w/ Johnny Cake or Chili and Jonny Cake are a staple in our house ! 2 cups fine-ground yellow cornmeal, 1 tablespoon sugar, 1 1/2, teaspoon salt, 2cups boiling water, 1/2 cup milk and bake in pan at 350 degrees! Tastes pretty Food ! Think I will make some after Church !!! take care Gary

Oh I love cornbread! Especially Marie Callender's corn bread when they still had restaurants where we lived. So sweet. I like it sweetened over plain. Haven't had any in awhile but always tasty, especially with chili or soup!

When I make cornbread - and stir it and I use a beater - then it rises higher - not sure that is your problem tho...

Aaargh! Just the mention of weevils brings back some horrid memories; I'm glad 'yours' were just confined to the bag of meal. I've never tried making cornbread, but I wonder if this bag wasn't a bad batch?

PS - Thanks for explaining what you mean by 'sweet milk.' Makes sense!

Make sure self rising flour !!!!
If it is add baking power anyway as might be bad-
Sometimes if in fridge too long won't rise
I keep in plastic container as I do sugar
Love this blog