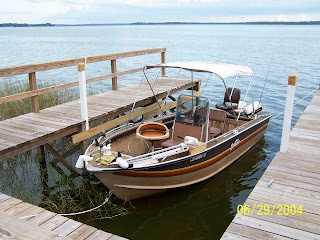 Thought I would drag out some old photo's. When we lived in a stable place this was Mark's boat at our pier. 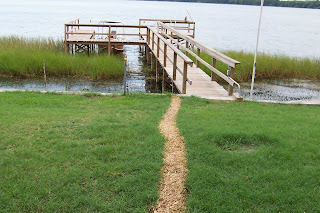 This was our pier, I ran elec and water out to the pier, and placed sod over the trench, as you can see it died. 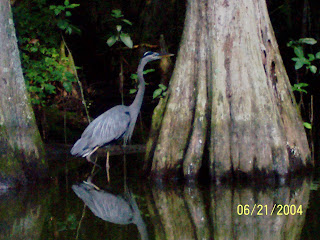 The rest of the pictures are from the Dora Canal, we lived next to it. 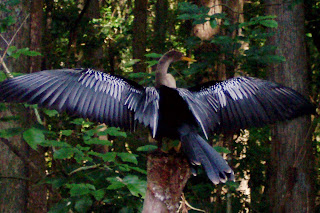 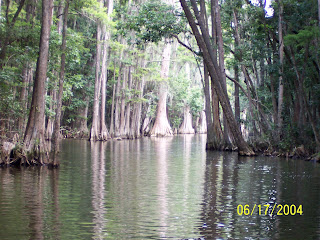 The canal was a mile long, some described it as the most beautiful mile in Florida.
Today's entry.....

September is a great month. This is our anniversary month. This year will be fifty-three years of mostly happiness and bliss. I think WE will write a book on marriage advice, how to make it last. It will probably be a one liner. Love each other and MAKE it last. Some marriages were not meant to be. No couple should stay together if they just CANNOT talk, love and be civil.

Okay that is enough. You will hear more of our marriage later this month. Our buddy Woody and Anna Mae had their anniversary this month. It was a good month for sailors. YEAH!!!!!
As I have said we are in Accord NY. We stopped by here on the way to try to hike the trail. We were both disappointed that we were unable to complete the trail. Sherry still reads Trail Journals and follows the folks who are still on the trail. Every day it seems she names someone who has climbed to the summit of Mt. Katahdin to complete their thru-hike. I am re reading ‘Blind Courage’ by Bill Irwin. Reading his endurance I am challenged to try it again. But it would be in two years.
Sherry will start her procedure for Osteoporosis when we get back to NC, and it requires refrigerated meds every day for 21 months. That would throw us 2011 before we could give it another try. But we do not know what the future holds; we will take it one day at a time.
Hope you all had a good labor day weekend. I know you folk that are still working appreciated the break.
We were reading our local paper over the net. Freightliner Trucks are made in Mt. Holly just five miles from Belmont. Coke put in an order for trucks and Freightliner said they would be built in Mexico. Coke said they will not. Freightliner is building them in the USA. Now Duke Energy (Our power Co.) put in an order for trucks. Freightliner said they will be built in Mexico. Duke Energy said we don’t like it but Okay. Now I am mad as fire, Why didn’t Duke not stick to their guns, move some jobs back to the states. Freightliner laid off a grunch of men, most still not working. Freightliner said they did not want to interrupt the lives of the laid off guys by calling them back for a few months. What a crock!
Take care and thanks for reading this drivel.
Nite Shipslog
PS:
Is it just me, or does anyone else find it amazing that during the mad cow epidemic our government could track a single cow, born in Canada almost three years ago, right to the stall where she slept in the state of Washington? And, they tracked her calves to their stalls. But they are unable to locate 20 million illegal aliens wandering around our country. Maybe we should give each of them a cow.
Posted by jack69 at 3:56 PM

well Jack as usual you have said it all and just right...bring back American made products...I try to buy just USA made...but it is difficult and hard to find ... sheesh...and looking forward to reading about "your marriage"...hubby and I have been blessed...not every day was sugar and spice....some days were thunder and lightning...but the S & S our lived and out did the T & L LOLOLOL...be safe up their in New York Land...or where you have parked your "home"??? LOL...hugs big time...Ora in KY

Well had a busy week-end on the Lake most of the
time. It was fun but I am tired. very tired. Was entertained by a Nashville Star. Had music
session. We were suspose to perform at the Park
but had already planned our Week-end. Just can't be everywhere. I should have bought your
home in FL. and would have had a quiet life.
I shouldn't complain as long as I can keep the
body moving. Hope you had a good Holiday.

Happy Anniversary to the two of you. I hope Sherry's Osteoporosis treatment works out fine. Those are great pictures you shared.I hate that jobs are being relocated in other part of the world also. Helen

Happy Anniversary whatever date it is. You know what I have always said. You worship the ground she walks on and I have a feeling she feels the same. Right there is your secret. Great pictures. Shirl I am going to say this on Jacks time, you do great. Sherry, the very best with your treatment.

Please let me know when this book will be available...All the very best for you two I'd like to wish as well.
Indeed September is the 'anniversary month', birthday, meeting me wife, engagement, university diploma, language diploma, and so many more.
With regard to jobs, cows and illegals - worked in a restaurant during another September, with people from India cleaning the dishes, sleeping in the kitchen and only the owner was of Greek origin - used to show up at the end of the day, counting money.
A luck, love and life filled week to you two.

I was talking with a neighbor lady the other day about marriage and relationships in reference to my son and his girlfriend. She said she and hubby got married early, she 19, him 20, and their thing they resolved (which is what I've told son/girlfriend) is divorce is not an option. I think people need to go into the marriage with that attitude and work their hardest to stay together; I know it is hard and in the incidences of abuse then divorce is definitely an option, but couples need to make that commitment to work through their problems; and I know your family has been impacted by relationship problems......but divorce is not an option is what I tell any "young one" looking for advice (that in addition to make sure they build their marriage on the Firm Foundation of Jesus :)

Happy Anniversary to you both this month. Wishing Sherry the best with her treatment.

Happy Anniversary this month! Wonderful that you have been in love and together this long! Wow...amazing! I'm sorry you'll have to put the trail on hold for a few years! I know you'll both be back there. I hope Sherry that the treatment makes you stronger than ever. Btw...what gorgeous photos of that blue heron, is that what it was? That canal is gorgeous!

Happy Anniversary!!! I would love it if ya'll wrote a book about marriage...it would be great!

Sorry you couldn't finish the trail, never give up on the dream...

I hope Sherry's treatment works well...keeping her in my prayers...as well as you...that someday you guys can finish the trail..something you've both worked so hard to accomplish!