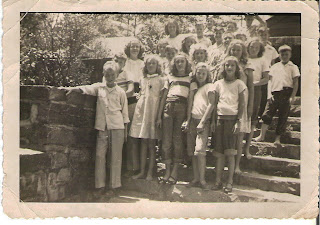 This is the fifth grade for Sherry, She is the Sexy one second from the right! (This is out of seq) 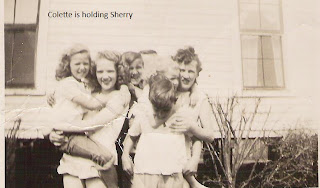 This is a Picture outside the mill house, Colette (older sister) is holding Sherry) 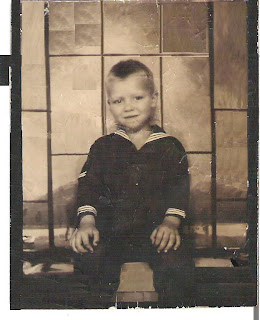 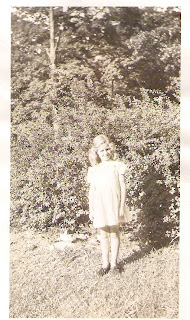 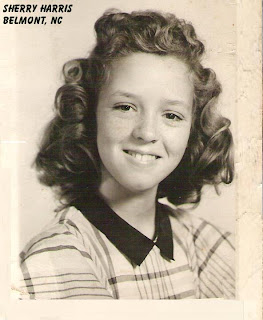 Did I put this one on Yesterday? I like it anyway. 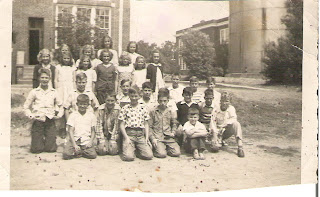 A sixth grade school picture. Second from the right, next to last row!
Today's history lesson:
Sherry moved three times in the same town in her life before ME. There is an argument in the family of who saved whose life. But to continue the story if you are familiar with cotton mills, each mill owner built houses near the mill. He rented the houses to the workers for something like 25 cents a room per week. A four room house rented for $4 a month. Now you have to figure that these folks were making 10 to 25 cents per hour. It was still a good deal. They paid their own elec. bill.
If you visit the Amish country near Lancaster, PA you will pass through a town called Blue Balls, one is called Liltits, you will go through Intercourse and reach Paradise.. Those are real towns. Folks like to joke about them. Now keeping that in mind each mill is named. So the mill hill goes by that name. If your dad & Mom worked for the National Mill, when anyone asked, you were from the National. Sherry was born on the Climax, because her Mom & Dad worked at the Climax. I have been in and out of Belmont now for over 50 years, and I have yet to hear a joke about the Climax. In Belmont it was just the name of a mill. There was the Chronicle, Majestic, Climax, and Imperial Mills among many others.
When Sherry was four or five they moved to the country for a few weeks or months. I have never understood why, unless Wiley was moving to the Imperial Mill and no houses were available. During that time in the country Johnny the younger brother almost fell in the well, someone pulled him out. They all argue who was the hero; even Ed Huggins claims to have been the hero. Now living this far out would have entailed a lot of walking since it was about 8 miles to the mill, but I guess Wiley walked since he had no car. This was in the early 40’s.
When a house came available on the Imperial Mill Hill, they moved to 129 Hawthorne St. in Belmont. I know that address well, because once I met this girl I wrote her every day I had a chance. At the Imperial the Harris’s had a four room house, now there were nine people in the family. Vernon one of her older brothers ( the county volunteer entertainer, now) likes to tell that he never slept alone until he joined the service. They all liked to tell the story of saving Sherry when she fell against the coal heater. She was burned pretty badly by rocking back against the old free standing stove, in a kid’s rocker. Problem is every brother wanted the claim of being the hero to save her, we still do not know the truth. I’m just glad one did!
Thanks for coming by the Log.
Nite Shipslog
PS:
*****
On the other hand, you have different fingers.
*****
42.7 percent of all statistics are made up on the spot.
****
99 percent of lawyers give the rest a bad name.

the stories are just great...I don't remember much about the early forties..but from the tales my brothers and sisters told me...it was rough..I always slept with my younger brother John until somebody married and moved out LOL..and just about the time we got happy with our own bed...they moved back!!!!! LOLOL...more stories...and when does Sherry get to tell of "jack????"...just wondering...hugs to ya...be safe...God Bless ...Ora

Ora don't ask about Jack it will probably be
fiction. It will be the life of a PK kid. He had better leave my name out of his story or I may have to file claim and Sue.

Isn't it something when you look at those old pictures. My nephew got the really good ones Like dad working on the capital with horses and some contraption. Sherry I think you were a really cute kid. I wish I had a head of hair like you. No wonder your hair always looks so nice.

Interesting story and pictures as always. I didn't know much about mills. People in our town drove to San Antonio to work at Kelly Field.

does Sherry have any scars from that burn? sounds gastly!

I loved the names of the town and the mills; nowadays kids would be making jokes about their names for sure