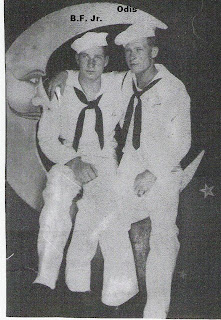 Since I don't have pictures of Valdese, I will back up. This is my brothers, 1944. I thought that moon was real. 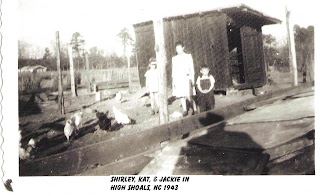 This is mama's chicken house and lot in High Shoals where she fired the rifle over it when the chickens were disturbed. Shirl, Big Sister Kat and me. Daddy's shadow taking the picture, he always wore a hat. 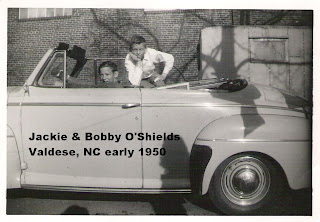 My cousin Bobby O'shields came to visit. I am driving ha! The '46 convertable was Bob's Sister Mildred's car. They were there all the way from South CArolina. 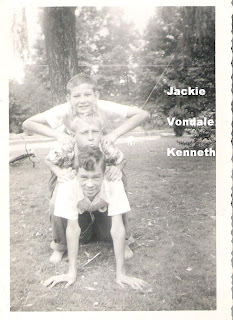 Me on top, Vondale and Kenneth they were visiting us in Valdese. Ken is the one who writes the nespaper column. I sometimes forward his articles. He spent a lot of time in Saudi Arabia working in the textile business over there.
Todays history, starting in Albemarle ending in Valdese, NC

I know it is cruel, but dad put Bingo my dog to sleep. He said son, Bingo is real sick I need to put her out of her misery. You will have another dog you love just as much. That is life. My aunt gave me a black Cocker Spaniel, I named him Ace. We were inseparable for about four years.
Ace ran with me everywhere, his only problem was he loved to chase chickens and that ain’t good.
VonDale and I skated to town once. Albemarle was on a hill. Streets were paved and there were sidewalks. We got to the top of the main street and decided to race down the hill. The hill was two blocks long. There was no one on the sidewalks so we started. I don’t remember who was ahead, but I do know I got too fast. I jumped off the first curb and up on the next but in front of the Western Auto Building, I had had it. Toooooo /fast. I sat down. YEP wore my pants out!!! Ace licked my cuts, I could not cry, but I wanted to. I was glad I got stopped.
Do you think Sherry was really waiting for THIS?
Dad was later assigned to a church in Valdese, NC. I was leaving VonDale. Kids can make the parents lives miserable, and I tried my best to do that. I did not want to move. I was Nine.
Quickly, like kids do, I adjusted to the small mountain town. I met some great kids. Jim & Bub Page, Paul Settlemyer, Guy Abee and Peter David Hunt. These guys were fun to be with but I was a little reluctant to share a lot. Three of the boys sang in a trio, they were honestly very good. At ten they sounded like the Everly Brothers did later. They were really active in church stuff. Once on one of our forays to the Catawba river to swim, I asked Bub as we were treading water, “Bub, are you guys really into this religious stuff?” Remember I am ten, Jim is ten, Bub is nine. Nobody around but us naked boys.

Bub stuck his head under the water came up with a mouthful of water, squirted a big stream toward me and said, “Hell yes!”

I knew I was with my kind of boys. Hahahahahaaha! Life was much more fun after that. Now don’t get me wrong. I got religion a lot of times in my life, when I was feeling guilty. I kept my daddy humble! Maybe that is why Shirl was the pet! LOL
Jim & Bub had a wonderful mama and dad. Garland Page (dad) could sing, wow could he sing. He picked a guitar like Chet Atkins, you know, picked it instead of strumming. Sitting on their front porch and hearing him sing was a high light of my entire life. Jim and Bub had chores after school. Bub cooked beans and cornbread ever night and Jim fed and watered the stock & chickens. I helped a little, and ate supper more at their house than I did mine I think.
Vondale did come to visit in the Summer. The Mountain town of Valdese was not as bad as I thought it was going to be. They also had a no-nonsense school.
Sherry is still waiting, I am hurrying to get to her….
Thanks for coming this way.
Nite Shipslog

PS: The reason congressmen try so hard to get re-elected is that they wouldhate to have to make a living under the laws they've passed.
Posted by jack69 at 6:09 PM

What a nice time it must have been, swimming in a river and being able/allowed to have a mouth full of the water.

I can just imagine the two of you on skates flying down the hill; thankfully you didn't break any bones.....

They were good times in Valdese we had lots
of friends. We still stay in touch and talk
everyday and get together often. The Page's were wonderful people. Great memories. You are
doing good keep it cool. That is where I got my
drivers license. Was I ever 16.

I like that cute little convertable. I liked to skate when I was young but would have been afraid of that hill. You boys took lots of chances while Sherry was waiting, didn't you?

wow...my heart stopped when I started reading that skating down the hill...sheesh...you guys gave a new meaning to the phrase...boys will be boys!!!! LOL...never moved a day in my life until I got married...but we didn't have any kids to play with either...out in the country!! you make growing up sound like an adventure!!! keep it comin....hugs to you both...Ora in KY PS...you could take a detour and stop by...would love to have you!!!