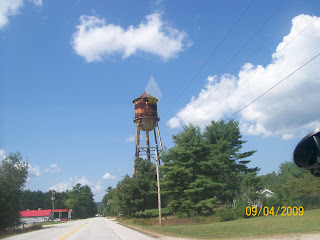 The most interesting thing I saw today was this rusty water tower. Probably the most rusty one I have ever seen. 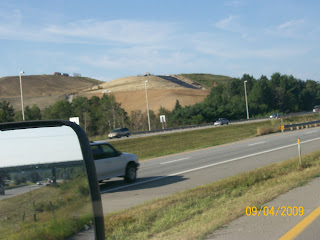 I was curious the whole time in Bangor, are they cutting this mountain down and selling it one load at a time, or making way for some huge building project?
Today was good. But every day above the grass is good.
We drove down to Scarborough so Sherry could visit with Judy while I ran to the Computer hospital over in North Conway, New Hampshire, to pick up the repaired HP Tower. This only happens about every BLUE MOON, that Sherry and I are separated. So I had a good trip over with Jil, and we did not argue much. Once I did tell her to shut up, I was trying to listen to 'Blind Courage', the book by Bill Irwin. I cannot understand all that I hear, but when it is just me and Jil in the car I can turn the volume all the way up. Jil does not care, She never listens, She just talks. (I know more folks like that) I did start to ignore her directions once, but I then turned around and got back on the road she told me to get on. I call her Jil, because that is the name assigned to the computer generated voice on the GPS. I would use the man’s voice, but it so much more fun to argue with a female voice.
Anyway I got the computer, it was a 13 year old boy that fixed it, at least that is how old he looked. Does that ever happen to you. Shucks now it scares me to see some policemen. Have you noticed they are allowing someone who looks like a high school sophomore to carry a gun, and man it is loaded. Was I ever that young? To be honest I can’t think back that far (and use logic).
Thanks for stopping by the log, today is moving day so this is short, probably not sweet.

Some people are kind, polite, and sweet-spirited,
Until you try to sit in their pews.

You are something else Jack. I was trying to figure out who Jil was. Glad you told her to shut up and not Sherry.

I know where there is an old water tank built in that design with a different kind sitting close to it that my son helped weld together. Made me hurt to see men up that high hanging on the side welding. Helen

We can't figure out why they painted our water tower blue when our colors are green and white. Jack I don't think I've ever heard of the University of Tennessee and I think Roxy has treats in that bag to take to the dog park.

you guys sure don't grow roots too often and are constantly on the move :) running away from debt collectors? (just kidding)

we call ours Lola; she used to be Stella but Stella "died" so she was replaced with her sister Lola; she can be irritating at times.....

wherever you may be

Glad you explained who Jill is, she takes over
the conservation. Well it is almost the Holiday
We were on the Lake yesterday and I guess we will be there today. Not my bag but go along with the crowd. Yes you were young once and
so was I we were not born this age. We do
have pictures that we were there for awhile.

I am going to be a crock pot user all winter. one pot fits all.That is the nice thing about winter, back to chili, vegetable beef stew, and I can think of so many other things that go in there. Have fun.