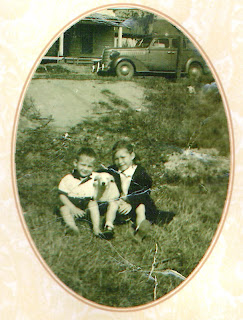 Very few early pictures of me, once they realized how cute I was, they started taking pictures. Of course I had to share with Shirl since she was the pet. 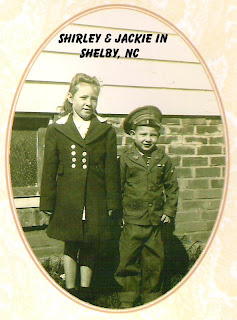 I was destined to be a military guy! 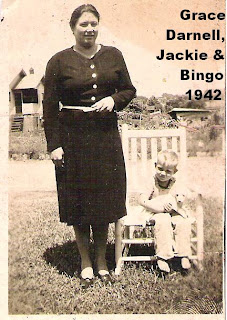 Mama 'n me 'n Bingo. I really had shoes but Shirl had hid them. 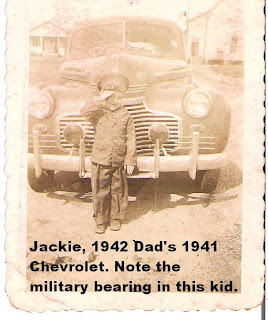 Iknow, you think this is a great picture of a '41 chevy. Look at them fog lights! 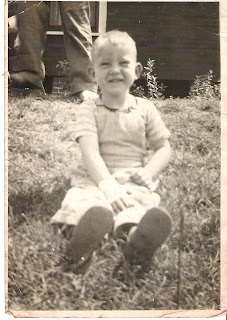 This picture was taken at Grandma Darnell's house in on the Art Cloth (Mill in Lowell, NC) Notice I had found my shoes!!!! 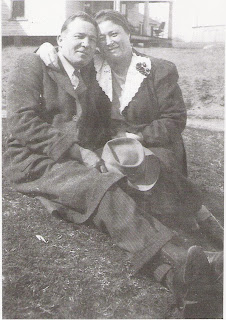 This is Mama and Daddy in Shelby, NC, on a grass hill in front of the house. 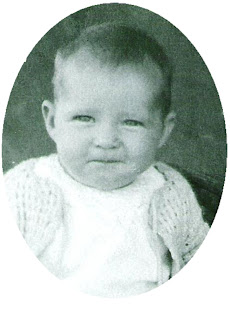 Since there are no baby pictures of me, I will claim this one (Shirl says it is her) but she was never this cute.
Today's continuing history lesson in our Anniversary month:
(I want to clarify one thing, Sherry does not get to tell about Jackie, Jack gets to tell about Jack, my blog my story, Okay honey?)
I was born, old wise and good looking! Hahahahaha! There isn’t much proof about the time up to two or three. My folks were embarrassed and did not let me get out in public. Mama told the story of getting on the bus once and seeing a lady sitting beside a paper bag. Looking closer the paper bag was over a kids head. She could tell the lady was embarrassed and irritated. Mom asked if she could help. The lady said she was taking her son to the doctor. She raised the paper bag just enough for mama to see the trouble. The kid has his head stuck in a slop jar. (Some here will know what a slop jar is). I always wondered if she was talking about me in a nice way. Hahahahaha!
My first memories are in Shelby, NC where my dad was a pastor. If course I did not know what a pastor was. I had two brothers and two sisters. There was a sister between Shirl and Kat, but she died as an infant. There was a boy born after me, but he saw me and preferred not to stay on this earth. He departed as an infant. So I was stuck with all these OLDER PEOPLE to raise.
What I remember most was we were at war. My two brothers were gone and a flag with two stars in the window took their place. I can remember the outhouse being up a little hill but close to the back porch. Dad installed indoor plumbing there because I remember my older brother threatened to flush me down the commode.
I remember leaning out a window to watch Tom, the cat, play with a mouse he had caught. I watched for a long time. I thought the mouse was going to get away. Later I learned the mouse did not have a chance. He was doomed from the time Tom got his paws on him.
I can remember the blackouts, when every light in the town was turned off or covered up. WE had Black out shades over the windows. (Nobody saw silhouettes on the shades during that time!) I would sneak into the yard with my wooden rifle and be ready to shoot down any Jap or Nazi place that came near my house. At three and four that was an exciting time for me.
There was a ventriloquist up the road who entertained kids for the fun of it. I think he might have been professional, but to me he was good.
(All the time I was in Shelby, Sherry was waiting forty miles to the East, for me to grow up and get to Belmont.)
Thanks for coming by the history channel. I am celebrating our Anniversary Month.
Nite Shipslog
PS:
Remember, half the people you know are below average.
***********
He who laughs last, thinks slowest.

This entry made me laugh. I know what a slop jar is. Its different then a slop bucket, or was at our house. My Mama called a slop jar a chamber. I have no inkling why but she elected me to empty it sometime. Shirl is going to get you one of these days.

you give Shirl so much grief! I loved the picture of your parents sitting on the grass; they were a nice looking couple

Great pictures and an interesting story of your life. Whoever that baby was it was cute. Must not have been you cause you were hid under the paper sack with the slop jar over your head Hahaha. Helen

I'm strong and can take all this verbal abuse.
He was a sweet little blonde headed boy.
People were not to much for pictures in the early days. They even get misplaced. I think
Jack had more pictures of him than me. I know
I tore a school picture up because it was so ugly and they threaten to give it to a boy I liked. No one every combed my hair. Kat said I had to much. Jack was always in trouble. I always remember the two blue stars hung in the window showing we had two brothers in the war.
"NAVY"

Honoured to be allowed to read through your history. Being a couple of decades younger don't know about the jaw, nevertheless hope that you continue to stick your head into such wonderful thinking your writing tells about.

Oh how well I remember the "Chamber Pot", under the bed and how great it was at 2 am in the morning and not having to run outside to the "Out House", I even remember waking up mornings, dressing in bed under the covers and taking the "frozen" pot out side to empty it!!!!

( remember the "slop jar"...or "chamber jub" as some called it..no matter what it is or was called it was a joy to use at two in the morning specially in the winter time...we had a cover on ours...LOL...you know what it was for LOL...!!!! and something tells me that Jack led a priviledged life of boyish contentment!!! (how bout that for a sentence of enlightment??? LOL) sure glad you found your shoes...LOL..hugs from Ora in KY

Jack that cute Baby picture is your sweet Sister.

We had a plain old name for it, a pot and we all pretended to be asleep till that blasted thing was emptied. Now on thinking on it I just wonder how close to the outdoor privy it even got. And I just remembered we had a LID FOR OURS. Now that is coming up in the world. Good pictures.

You were a cute kid Jack..I must say!

LOL@Shirl saying she is strong enough to take this verbal abuse... you two crack me up!

I love when you go into detail about your past..taking a trip down memory lane.

What date is your anniversary on? My brotherinlaw and sisterinlaw are celebrating their 25th on the 24th of this month.

Happy Anniversary Jack and Sherry...wishing you many many more wonderful years together!