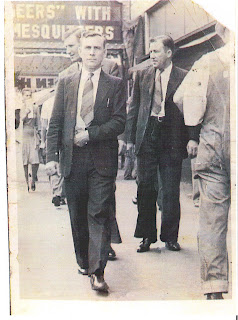 This is my Dad (dark suit on the right, his best friend Walt Moody in DArk suit on left. This was during our Valdese time, Walt pastored in Granite Falls, NC. 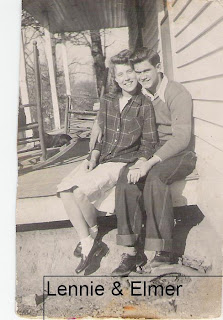 WHile I was in Valdese, Elmer was courting Sherry's older Sister Lennie. A lot of stories I have heard about that Courtship. the main one, "He may as well marry her and move in here, he won't go home!" (Sherry's dad.) He never said that about me! 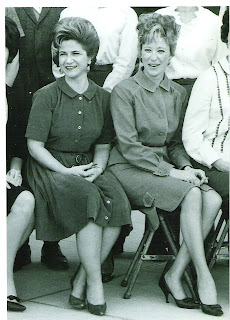 This is Shirl (somewhere) I was still in diapers I am sure. Her best friend and roommate Dee on the left. 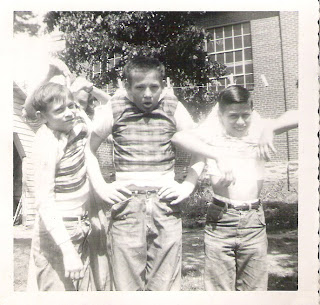 Shirl pinning Bobby (cousin), me (That shirt was 'fuschia and brown, bright!) and Guy Abee to the clothes line out behind the house in Valdese. The school gym. was in the back ground, that is how close dad moved me to school to keep me in. It was closer to come home for lunch than go to the cafeteria. 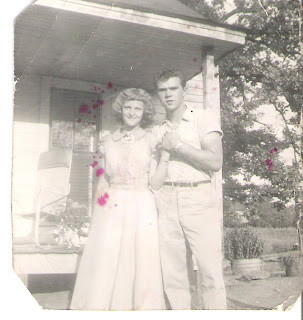 This is Sherry's brother Vernon (the ladies man) with Reece one of Sherry's closest friends. Sherry was still in the house waiting for me. 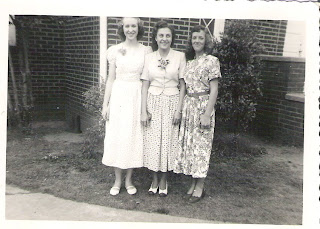 She did get out to go to church, on the left is the former pastor's daughter, Grace and Lillian Starnes the Church pianist and my girl who had to hurry home after church to wait for me.


Today's look back in the exciting history of Jack (while Sherry sat at home, no excitement, just waiting)

Well now, a study of names puts mine at the top as a trouble maker! Can you believe that? Probably Jack and Joe named boys are the sweetest coolest kids (and men) going. What slander! Now to continue the story about a sweet kid named Jack.
Valdese years, I was somewhere the 12-15 years old bracket. I learned a lot during those years. Had my first bank account. Cut grass, etc for extra money. I opened a saving account with two dollars. Built it to about $20. Took out to buy a white sport coat and some cool shoes, white bucks. I can’t remember the occasion, but it would not have been for church (LOL). When we moved I had left fifty cents in savings, had it been a dollar I would have been rich by now, probably up to $20 again, but fifty cents they take for a maint. Fee and close the account.

I was introduced to horses. The Page family had a pony named Frank. He was used to plow and ride. I had the terrible experience of being up all night with the family as the Vet worked with the pony, but we were watching Frank die. He was foundered. The Page family (and me) took it real hard. Frank had gotten into the oats and then went to the creek to drink. I learned a lot thru the Page family. You could not say enough good about them.
Robert mentioned something I hadn’t thought about. When we were in the river if you wanted a drink you just drank what you were swimming in. If you ame across a creek and wanted a drink you got it, I guess the streams are too polluted to do that now.
Shirl grew up in Valdese. She graduated from HS there. The one and only person in our family to do so. Dad put me in the back yard to give Shirl OUR room. I lived in a little homemade trailer. The only picture I have of it is in the picture of Bob and I in the convertible. It is in the background. I loved that. Ace slept with me and I had my own radio with no case and knobs, but it worked.
Even more sadness than Frank’s death was the death of my beloved Ace. Chasing chickens was his down fall. Mr. Brinkley had a lumber yard across from the church and parsonage. He raised chickens (loose) in amongst the lumber piles. I think he got enough of Ace, and poisoned him. I buried Ace and prayed over his grave so long I must have got religion again. I asked God to please take him to heaven and I would live good and come to see him. (I tried for a week or two!) LOL.
Sherry was jealous of Ace. I carried two pictures in my wallet after I met Sherry, one of her and one of Ace. LOL (TRUE!)
Next…… Dad get ‘orders’, an assignment to Belmont, NC. He had heard of a girl there who was just dying to take me off his hands. She was pining away, staying at home just waiting the arrival of this guy in Shining armor. LOL Her dad was saying Where is he?????
More tomorrow! Thanks for reading history!!
Nite Shipslog
PS:
Sherry ok'd this: Someone asked if she was scarred from her falling into the red hot stove. Yes. It burned the back of her head, no hair grows there in the spot. That is one of her problems at beauty shops, to make sure they understand to not cut so it would ever show. IT never has.
She has handled it well.
Will Rogers said: There are two theories for winning an argument with a woman.

My picture was in Charlotte in a group at the Ins. Co. where I worked. Betty will know about my job I was an Insurance Underwriter.I approved
people's applications for Ins. Love all the picures. Saw Elmer at Church Sunday, yes we
attended our old Church. Vernon is still a handsome guy. Love the picture of Dad and Walt
in Tn. at a convention.

PS: Elmer look a little like a young Jimmy Herron. Jimmy and Billy were both handsome.

Another very good entry of your pictures and memories. Maybe Sherry was wondering who you loved the most the chicken or her. She won out didn't she? Isn't it a shame the rivers and streams aren't clean like they were back then?

a week from today is your and Sherry's special day!

I loved the picture of Shirl and her friend; always a very nice looking woman she was/is!

enjoying your tales as you are leading us up to your and Sherry's time together :)

Love those old pictures. Makes me feel almost young. I bet you, Jack were a handful. Yes that snow was cold, and that bull kept moving closer.