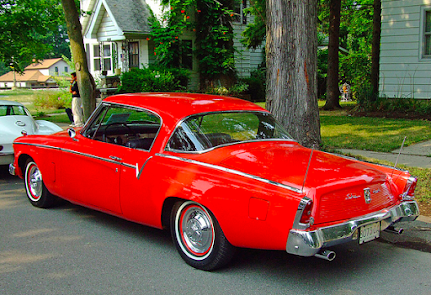 Not Rooting for the Belmont Raiders, Braves, Cowboys or Dolphins, BUT rooting plants.

When we moved in this trailer there were some citrus trees and a several bushes. Sherry let me know the names of some. One was a Bradford Pear tree, that doesn’t grow pears (makes no sense to me!). And a couple Hibiscus.  (I remembered them after she said that because my brother Junior had some giant hibiscus and the 3 year old twins called the ‘High Biscuits’.

Ok, then there was a couple small ones just little blue flowers on. At the corner was a 4 foot plant, leafy. Not an eye sore, just a nice plant.

BUT wow as we stayed here the top leaves turned RED, my girl was excited. “Honey this is a poinsettia!” We were very excited. We noted down the street one trailer had them along the side. A couple days ago I mentioned to Sherry I would ask Friend Don (of Don & Evelyn) how to ‘root’ some cuttings. The things must be hearty, it reached near 32 here the night before. 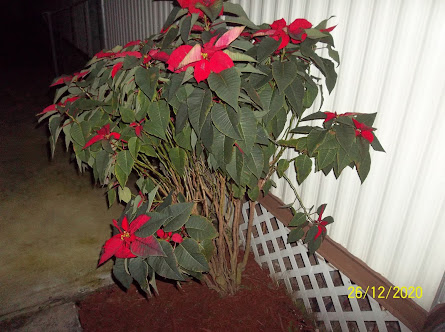 One of those many stems is what broke off. I had at least 10 flowers on it. 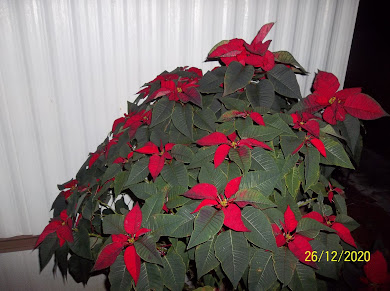 Low and behold after that wind storm passed two nights ago I walked out on the patio and one branch of the poinsettia had broken off. 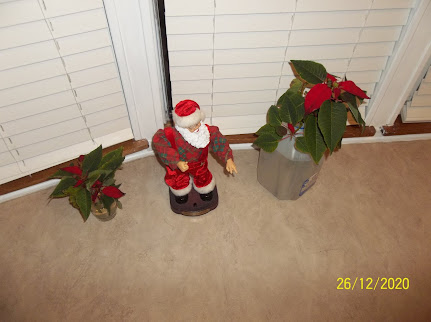 It happened before I had a chance to ask Don. But I read that I need to change the water every few days. So I am going to have to figure a way to haul them in the motor home.

I remember how profusely they grew at my in-laws home in Bartow. But you're asking the wrong gal -- I've got a black thumb when it comes to plants. LOVE the story of the twins calling it 'high biscuits'!
Wishing you a warmer day! (We're sitting at 27*, but I love it.)

How cute with the twins with high biscuits :) No clue how to help with rooting. I'm like Myra. I got a black thumb, two of them :) Good luck with it though!

I hope your plants do take root and you can grow them. How wonderful to have an outdoor poinsettia growing on your property. The only plants I'v heard of rooting like that were roses. My grandmother used to do that and grow her own. Hopefully you do get your warm and sunny weather back. Here i it is very cold. One of my sons sent me a box of Florida sunshine this week. It was a box of clementines, from the fruit farm we visited when there last year. They were delicious and we all need some extra vitamin C this time of year.

Very pretty red. You know they are poisonous - right?

Ouch, NO I did not know they were poisonous!

Your Pointsettia is gorgeous. I've never seen one so large. Sy is big into plants, having over 150 of them, all houseplants. I'll ask him if he's ever done a pointsettia from a stem cutting. Otherwise, perhaps UTube could help ya out. I'm very curious now too. Oh, when starting any new plant, you should cut the bloom off so the nutrients go into new growth. Yes, they are poisonous so it's not recommended to eat it. golly gee. MA's got me hungry for clementines so a trip to town in the morning:).
love n' hugs from up north where we are finally getting daily snow, Pine Grosbeaks that we haven't seen in over 5 years, and today, a pair of coyotes. I'm lovnin' watching nature around me.