The Proof is here/& Thanks 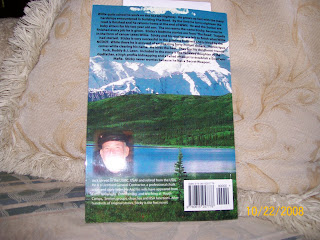 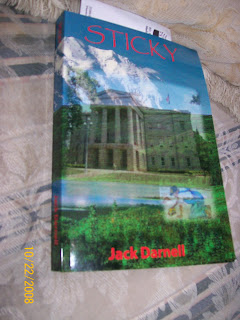 Well this is a case of ignorance on my part. I lost an entry off line. I may have sent it as an e-mail. If you got it, please return it. Hahahaha!
It was my big announcement. We received the Proof and are looking it over. I left a few goofs, maybe a couple hundred capitalizations mostly. Anyway I guess it is back to the drawing board. It will be another week to wait for another proof. BUT the book is beautiful, and well presented.
I will try to include a picture of the cover. I received a lot of congrats. All of them I am proud of. One of particular note from Joan in Lancaster. She said she had told Dan, Jack should write a book and here, Gosh Darn, you have done it. This is a wonderful couple. While we were in Lancaster on one of our trips through, they took us on the back roads tourist trip for the day. It was a wonderful trip even included a derby for kids batting. Of course they had a grand child involved, it was all great. Dan & Joan being Harley enthusiasts (yeah they still own one and ride) took us to the Harley Davidson Factory.
I thought of Dan when I was putting the NC State Capitol on the cover. (BTW that was Shirl’s idea) Dan has a cousin who was Lt. Gov. of NC, old Rufus D. The Doughtons are famous in NC, came into the state thru the mountains as pioneers. Robert D. was Dan’s uncle. He was a state Rep to Congress from 1910 to 1953. He was Chairman of ‘Ways & Means’. During that time he championed and helped design and layout the Blue Ridge Parkway. The Parkway along with the Shenandoah Drive is one of the most spectacular drives you can take, it is beautiful. To honor old Robert one of the parks was named Doughton Park. So when driving the Blue Ridge think of Doughton, it is there because of his vision.
Of course Dan forgot the Albemarle, NC area when Joan blinked those eyes and flittered her lashes and said, ‘Come on with me to Pennsylvania big boy,’ he just could not resist. Of course for those who know Dan know he is successful in his own right. He joined the Navy as a seaman recruit and climbed to the Officer’s corps. He doesn’t brag about it but he worked in the basement of the Whitehouse when Nixon lived there. I have to say he is one of the best bosses I ever had. Oh and he and Joan are excellent dancers, Sherry & I don’t dance, but that couple can cut a rug!!!! They are dedicated family folks.
I am outta here, thanks for reading the LOG
Nite Shipslog
PS:
I am not a member of the NRA, but I agree with most if not all of their beliefs and passions.

****** What part of 'shall not be infringed' do you not understand?

I look forward to being able to read your book. Sheila

Well glad you are almost there.
Glad I got notable mention. I had
to call it to your attention.
Joan and Dan sound like a wonderful
couple.As mother would say he was up in the papers.

My entry is gone with the wind.
I thought I had spell check when I
first started but It is not there
now. It takes me forever making sure I have spelled words right.
The Parkway and Shenandoah Drive
is beautiful.

I lost an entry the other day too...I think we all have at one time or another... maybe we have a blogger theif who is invisiable and going around while we are asleep stealing our entries...hahahaha!

Your book cover looks great!!
Congrats again...I do hope I can buy a copy... I know you make a great Author and a good read...no doubt!

Have a good weekend
Hugs
Terri

Well I commented this morning but it wouldn't go through. It said blogger was unavailable. So I'll try it again.
The book cover looks great! I sure there are many books that have goof ups the first proof. Hang in there you're getting closer to stardom or readerdom, lol.
Debbie

P.S. They came out with a new way to make it easier for our readers to comment on here. If you want to change it click on settings on your dashboard, then click on comments, then scroll down the page and click on embeded at bottom of post, then click on save.

Jack maybe it want be long before you have your book up for sell I'm looking forward to getting one. Take care, jean

The cover of your book is really nice. Hey! It isn't too late for you and Sherry to learn to dance.

it looks great and it is really coming together! I bet it will take another proof after this one to get it really down right, but I'm sure it will look great when all done