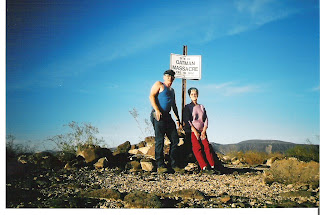 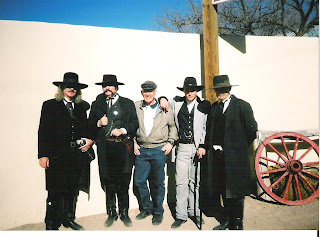 Trick or Treat? That is even silly now that I think of it, now it is just Treat. I guess that is good. I never heard of trick or treat when I was a kid. It was just trick! Most of the costumes were just 25 cent masks. All costumes were home made. No one would have thought of asking their parents to buy a costume for one night. I did know a couple kids who had the black plastic suits with the skeletons painted on them, but they wore the same suit every year until they out grew it. We went down town first to see if you could recognize anyone.
(Pictures are me and the good guys at the OK corral, Wyatt & Doc. The other is Sherry and I at the Oatman massacre site near Gila bend)

We carried a bar of soap and soaped the downtown windows. If we felt mean we used wax we ‘borrowed’ from home. The wax was used by mama to seal jelly jars when she made jelly. The last year I lived in Valdese the merchants go together and allowed the kids to paint scenes on the windows with water colors and awarded a prize for the best.

Did you ever pull up a corn stalk? Well when you do you get a nice clump of dirt around the roots. And the stalk will stand up by it’s self the clod is so heavy. In Albemarle Tuck, Ray Sides and me pulled up corn stalks and lined them across the road like a barricade. The road was not busy, but when a car did come he saw the barrier and locked his brakes. Sometimes he slid through the stalks. There was no damage to the car and none of them were going over 30 mph anyway. Well we thought it was fun anyway.

One year Kenneth Herron, my cousin showed me how to ‘can china berries’. (We called them chaney berries for some reason). About August You put them in a quart jar with water and screwed the top on tight. They were RIPE and stunk to high heaven by Halloween. WE thought it was fun to throw them on peoples porches.

Okay , but that was not as mean as the boys who pooped in a paper bag and set in on fire on someone’s porch and yelled fire. The unsuspecting owner came out and commenced to stomp the fire out. I never did that.

Anyway have fun and give out a lot of candy and be glad that the kids are much better today!

PS: HOW TO STAY YOUNG

Laugh often, long and loud. Laugh until you gasp for breath.

And if you have a friend who makes you laugh, spend lots and lots of time with HIM/HER.

The tears happen: Endure, grieve, and move on. The only person who is with us our entire life, is ourselves.

LIVE while you are alive. Surround yourself with what you love: Whether it's family, pets, keepsakes, music, plants, hobbies, whatever. Your home is your refuge. Dance around the house naked.

I remember in Burlington someone put a rocking
chair on top of a telephone pole. I remember
soaping Ken's car windows and they came and
soap dad's car windows that was in the garage. I don't know how he knew it was me. Had lots of clean fun.

LOL; not sure if the kids are much better these days; great Halloween memories!