It was not me that yelled, 'YOU LIE'! it was some other idiot! 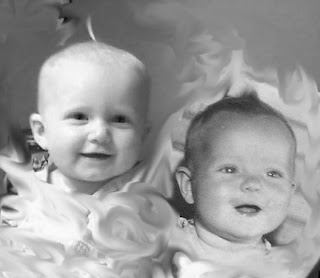 Which is the Great grand daughter Elsie Mae and which is the Great Grandma Sherry?
I feel like it was me who yelled, ‘YOU LIE’ instead of some idiot in congress.
Lucy took me to task yesterday, I don’t think I have ever answered a comment on my blog this will be the first I think. I am not yelling or griping, I am just using my freedom of speech to make my position clear.
Quote: He is our president, like it or not………
Did I say something really nasty about our President? When President Obama was elected, on this blog I stated I did not vote for him but he was my president. I said I hoped he would be the best president we have ever had. I meant every word of it and still do. As with any president I can disagree with some of his methods, without being nasty or calling him names. That is not always true. No name was strong enough to call President Bush, (Liar, crook, idiot, murderer, killer, etc) and He was our president, like it or not……
When President Obama was running for president he constantly attacked the Republican System of giving aid to the rich, but during that eight years he became a millionaire plus. He never complained about that, and never turned around and gave it to the poor. (I don’t expect him to)
Quote: We should have never gone to war in Iraq in the first place. Like you said we do have freedom of speech. THERE WERE NO WEAPONS OF MASS DESTRUCTION.
I agreed with President Bush when Saddam was dethroned. Iraq constantly refused to allow UN inspectors in. He refused UN requests. He personally shot a member of his own cabinet in the back of the head (spraying his brains on other members and over the cabinet table) in his own cabinet meeting, the man had disagreed with him. Reports said he didn’t miss a word in his speech.
He ordered a minimum of 180,000 Kurds gassed to death (SEEMS LIKE MASS DESTRUCTION TO ME. they probably thought so!).
Have you ever see a huge tree chipper working on the side of the road? One that eats limbs up and makes mulch of them? Saddam ordered two men, who disagreed with him, fed into one of them feet first while the families were forced to watch. He was an animal. YES I am glad he was taken from power. I disagreed with placing that many troops on the ground, but I WAS NOT IN CHARGE.
When Barrack Obama was running against Hillary he was viewed much different. Quoting Hillary backers, “he is a good orator but has no experience. HE DISRESPECTED OUR FLAG. I can't see him as president. He could do nothing without Oprah”. Some even swore to quit watching Oprah...... Now he is brilliant.
The wars are still going on. The money, Obama swore to stop, is still being spent. The president has a democratic Senate and House. He stated in his campaign he would end the war and have the troops home in sixty days. Then it was 90 days. Then it was 6 months.
What is the problem? He said he could do it with the stoke of a pen. The fact is, if he and congress (democrat and republican) wanted the war ended, it would be ended! The President requests the war funds and Congress approves it…( Like it or not).
There will come a time when past administrations will not be blamed, won’t there? I will say this, If this health program does cover illegals, somebody will be eating a lot of crow.
So that is my rant for today. No matter what we say the sun will still rise tomorrow. Life is still good. I am not angry with anyone. I just want to make it clear, I did not yell out 'YOU LIE'.
Shucks my good friend Sonny is a Democrat. WE have traveled thousands of miles together, I love him like a brother.
Sticky is black and a Democrat, and he is a good friend. I don’t have to agree with every conviction a person has, or all he says and does. If I did I would have no friends. (uh oh, could this be an indicator? now I know!)
God Bless America, God bless our President and God Bless our Troops.
Nite Shipslog
PS:
The graveside service just barely finished, when there was massive clap of thunder, followed by a tremendous bolt of lightning, accompanied by even more thunder rumbling in the distance.. The little old man stood with his beagle, looked at the pastor and calmly said, 'Well, she's there.
Posted by jack69 at 7:16 AM

Sherry is on the right I would know that Lady
anywhere.

Jack that is well said, they do forget how our
other Presidents were treated. I applaud you
for giving History correctly which some people
see but one side. I pity people who close their
minds to what is really happening. Thank you
Brother for refreshing my mind. This morning on
the news they found a loop hole in the health bill that the illegal aliens will be cover at the expense of our tax dollars. They are getting medicare and everything else, but not becoming a Amercian Citizen, WHY NOT? I wish
everybody could see the e-mail that is going
around where when they were on stage saying
the pledge of allegiance to the Flag with their
hands on their heart, Obama left both of his
hands to the side. How disrespecful TO my Country. You know the word ALLEGIANCE means LOYALITY. You know I am a registered Indepandent that means FREE.

Touche and you and Shirl I did not not pick about Obamas hand over his heart I got one up on you,have every right to say I was wrong. I did not want to say to much but I have lived longer than either you or Shirl and I am probably not as smart since I did not have a lot of schooling all you said was true over the years. I wish there was not a 2 party system but that will never change. You say you are an independent so you are free. Im not even registered to vote so I am free to . I know he did not salute the flag or put his hand over his heart. I simply said he is our president and their were no mass weapons of mass destruction to go to war. Come on guys I wrote about this on my blog today. I said it would probably create a problem, but as said we do all have a right to disagree and I thought your comment was one I could respond to in the manner I did because I kept repeating it was my opinion, and I guess I should not have said anything. I apologize for any comments that offended anyone. I just thought of you both as friends enough that I could make a comment such as I did. I did not make aNY ACCUSATIONS jACK AND YOU KNOW IT. Sorry, sorry, sorry, sorry

I go with Sherry on the right too. But they are both beautiful babies...poor Hubby couldn't play golf today because it is raining here. You and Sherry have a great day, Sheila

Sherry is on the right; I guessed it before I read Shirl's comment, just so you would know I didn't "cheat" and look ahead :) both were/are beautiful babies :)

I have to be really careful what I say politically, but I know a lot of the time when I hear our president speak, under my breath I say "for crying out loud"; again I think your words are very wise in today's blog

Hi Jack and Sherry! I love freedom of speech, but I don't make comments to start debates or accuse people. Some people love the drama, but I don't! I'm glad to hear that you don't take things too personally on here! I don't follow politics at all, not even the Canadian politics, but I know how heated some people can get, so I prefer to just say "way to go" for voicing your opinion! :)

Love the pic of Elsie May(on the left) and Sherry....too cute!