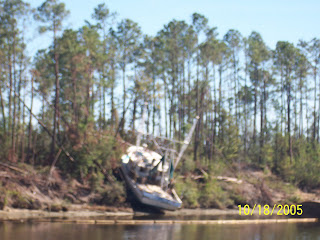 This is about the time of the year Katrina Hit, we went down on the 18th to see about volunteering. This is a bayou off Biloxi Bay. These are big boats washed ashore. WE lived in Biloxi once and I workded on the crash boats. Bad weather always drove the shrimpers up this bayou. 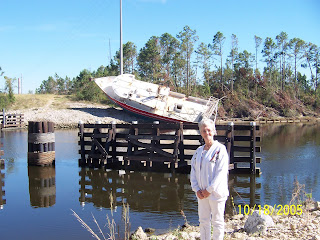 My girl in front of one wreck. 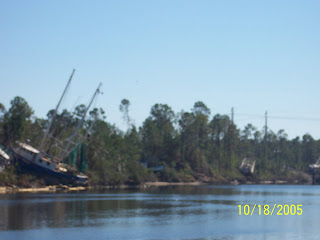 That is a large shrimp boat in in the woods. We worked in Pascagoula, this is close to Biloxi.

Well this evening I sit before a healed computer. It has been a long climb, but I think we have made it.

Have you bought soft ware that is limited to the number of times you can load it? I have run into that problem with Adobe Acrobat. It will not load because It has been loaded too many times. They have no way of knowing your computer crashed or if you are loaning or selling it so they stick with their guns. Maybe I will buy again, but it is pretty expensive. My book printer does not require it anymore so I guess I will do without.

We have been reading blogs all along just not commenting. We are in a low spot and the cell reception is not too good. This computer has a faster processor, I hope it works better.

In a week Lucy put a cute picture of a little girl on her side bar and said it was the blog owner. HA! And all the time she said she was approaching the big eight zero. LOL. Now she has a turtle named after her, and the turtle lover has lost her job. She will have to go take the post turtle down and play with it. It has no business being up there and did not get there by himself.
Rain is becoming quite a photographer and Betty is going to put pictures of Koda on the blog and tell something nice about her pet. Sherry won’t let me put her picture on and say something nice about my pet name.
Ora is taking a longer break than I did. In Helen’s last blog Ken was sickly, hope he is better, had some good butterfly pics.

Someone is washing clothes at home now instead of riding the bus, she got all her thingees hooked up right. (She (Melanie) has a new scrub board and a #2 tin tub).

Saw some pretty pictures of Debbie and Terri and company. Sherry Said Debbie’s family was bigger than ours, had a good pic.

Sheila’s mama Jean had a Happy Birthday her 39th. I think most of us are getting pretty good weather.

Fall arrived in Upstate NY and Woody and company is still cooking and singing. He has filled in for the pastor some.

I know I missed some but We have been reading as much as possible. Sherry reads them all.
Thanks for coming this way. I promise much less interesting entries later.
NIte Shipslog. Signed the Chief

PS: Signs Your Employer has Switched to Cheaper Health Care:
*****The only expense covered 100 percent is "embalming."
*****Your Prozac comes in different colors with little M's on them.
*****And the Number 1 sign you've joined a very cheap health care plan is........
*****You ask for Viagra, and they give you a Popsicle stick and duct tape
Posted by jack69 at 9:45 PM

Well thats proof you have been reading.

wow that is amazing you can remember everything you wrote! hope all is going as well as it can; take care and stay out of trouble (Jack) both of you :)

Sounds like you are keeping up with everybody pretty good. Ken is feeling much better but the light in his TV went shot last week. He ordered another one than after about a week it went on the blink, just shutting the tv off and turning it on. New bulb came in late yesterday. Let's see how long that last. I really need to update my blog but I don't have much interesting to tell about so I am just keeping my mouth shut LOL. Guess I could blog about the TV LOL. Those boats are really big to be washed ashore like that. Helen

You have been reading but it is nothing like having you and Sherry back in real time. That was a sad time when Katrina hit. So you are going to sunny Florida. I hope your computer decides it is fixed. We missed you. Mort got 2 more stents but his main artery is blocked pretty much so if more serious problems come up they will have to do a bypass. He said there was a lot of pain this time. Sorry , but as you know I worry about that man.

Well glad your computer is healed. This has been a real busy time. I plan to stay close
when you leave. Sheila and Paula thinks you
will try to slip out of the park without paying.
It has happen before. Glad you are back.

We miss you when we don't hear from you. But we also know that sometimes things keep us from the computer. I was hoping I would run into Shirl when I was out shopping yesterday but she must have been at a different store....ha. Take care, drive careful and have fun in Arkansas. Sheila

It's good to see the Shipslog sailing on my dashboard again. I'm glad your computer is back up and running. I'm sure you missed it.

I'm glad you & Sherry enjoyed Terri's pictures. That was only a smiggin' of our family in the pics she shared. Mom & Dad had 10 kids (2 are deceased), 23 grandkids & so far 17 great grandkids with another 1 due in Feb. So, yeah, our family is getting pretty good size.

I am trying to do a little catchin up today on blogger..have missed you guys!

It was sad during Katrina, so glad you two were able to volunteer...it's hard to believe it's been that long ago...

Glad you enjoyed the pics from Grandads Birthday....yep we have a BIG family...I love it :)

Glad to know you all are back at Shirl's for awhile...and that your computer is fixed..YAY!