(The pictures (artists in flowers)I just liked)
Some Saturday mornings we go to the Waffle House and get a pecan waffle. This past weekend was the BEST. We went in and there was a big line. The lady asked us if we would mind sitting at the bar, Sherry does not like that too much because the stools are too high and there is no place to put her purse.  but this time she opt to take the BAR.  Great choice. 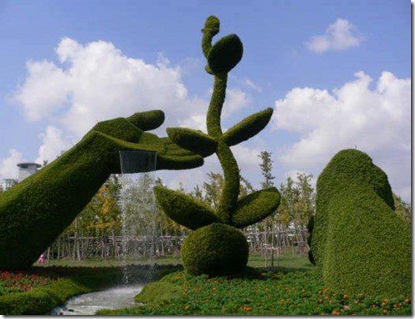 I am not one to take another’s occupation for granted, I appreciate most occupations and folks who can do them. You gotta admire a cook and waiter/waitress who can laugh and cut up in a mad house and keep things running smooth. There were 11-12 folks behind the counter, if you know the Waffle House, you know that is tight. 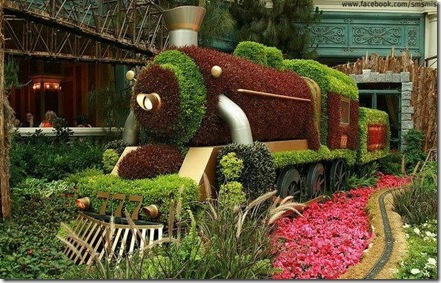 They were moving hither and thither carrying dishes up their arms and taking orders.  At the waffle house the waiting crew also wash and stack dishes. It looked like an organized mad house. I am going to vote for that crew to replace congress. 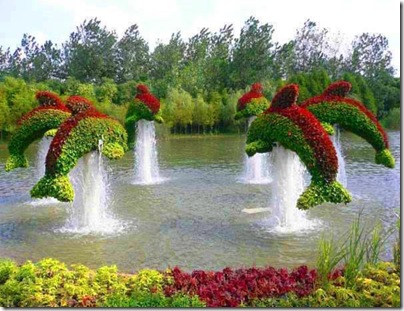 Everyone was smiling and joking and folks were getting fed as fast as anyone could have done it. It was a fun breakfast.
Do you remember the Geico commercial where the haggard waitress is called over to a customer. He says, “I didn’t ask for Mayo!”
She politely takes the bread with the mayo and rakes it off on the edge of the table puts it back on the sandwich, says something like ‘that should do it’,  and walks off. THAT IS THE KIND OF WAITER I WOULD BE IN A MAD HOUSE. 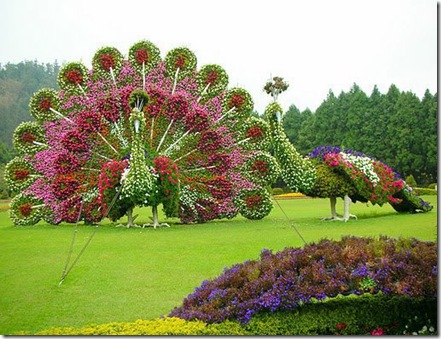 I have been a computer repairman and built a  house from the dirt up completely by myself, but that is nothing compared to a cook or waiter at rush hour.
There are waitresses and there are WAITRESSES! Some look like they are frazzled and going a mile a minute, then one who is steady and cool and seems to get twice the work done.
Are there any jobs that amaze you?
Thanks for coming by the log,
Nite Shipslog
PS:
Before judging another's job, we should try it for a day or two.
++++++++++++++++++++++++++++++++++++++ 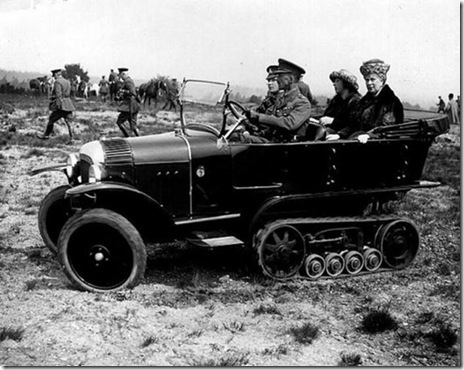 Strange or different vehicles
Posted by jack69 at 1:12 AM

Wait people amaze me too! Especially those that take the order without writing it down for a party of four and get it all right!! Those and retail people; they always are smiling after standing on their feet for 8 hours ringing up order after order. And those are often the lower end wages paid.

You do have to admire those folks. I'd never look down at anyones occupation. We all have our part to play and those that do their job well, are special. I guess I've always thought that teachers were extra special, and then too nurses do some very unique work too. What a blessing we have so many different talents. I really like the pictures of all the topiaries in your post today. Hope your Monday is a great one there!

I could not be a waitress or a
cashier in a grocery store. I could bag groceries or put up stock. I'm glad people are made for different jobs. I will settle for being retired Secretary. I respect all different jobs and glad we have them makes life easy.

Having waited tables in my teens I can say, there's an
art to being a great waitress, and speaking from where I am in my sixties, youth plays a big part! Back then I could memorize for a party of 12, get the dressings and entrees right where they belonged -- yesterday I couldn't remember why I went to the fridge until going back to the mixing bowl and checking the contents to see what was missing:( Guessing that Waffle House wouldn't be offering the gal a job!!!

Goodness, this struck a nerve!
I loooove Waffle House; in large part due to their cheerful and efficient employees. My former mother-in-law put her 6 kids through college by waiting on tables.
One of my biggest pet-peeves is seeing diners who act like they've "above" their server and never bother to make eye contact.
Maybe the only thing worse is that server who thinks he/she is above you - lol. (Never mind, we can't afford to go to those places anyway!)

I also love Waffle House. My hubby...not so much, but I think that it's because smoking used to be allowed in there and that didn't sit well with him. But...I've always liked their food. I like the fact that I can sit there and WATCH them cook my food, too. My fave: 2 eggs over medium, hash browns (scattered, smothered and well) and toast with grape jelly. Uhmmm.
Thank you, my friend. Another good blog. You just keep 'em coming, doncha? I don't know how you do it. It's all I can do to get a couple out a month!
Hugs to you and Sherry,
Jackie

John thinks I'm crazy because I clean up the table after we eat out somewhere. On the other hand I think he is rude for thinking the waitress should have to clean up his mess of Sweet 'n Low packages etc. How much effort does it take to put them on the plate with the silverware and dirty napkins.

The old half-track vehicle in the Night Ships Log entry brought to mind that it was the fertile mind of Winston Churchill that conceived both of the armoured vehicle and the tank. In the 1900s when he was Minister of the Home Department in the Cabinet, a group of (if memory recalls correctly) Latvian terrorists were holed up in a house in east London. Churchill had his government-issued Rolls-Royce fitted with steel plates on the sides and drove the Rolls to the home and led the assault that ended the terrorists actions. Thus was born the armoured vehicle. In World War I, or the Great War, as it is commonly called in the U.K., Churchill - although he was at the Admiralty at the time, conceived of the tank and pushed for its development. The idea for the tank was most likely an outgrowth of his idea for the armoured car.

Binary Options is the way to [url=http://www.easybinarycash.com/]make money[/url] securely online