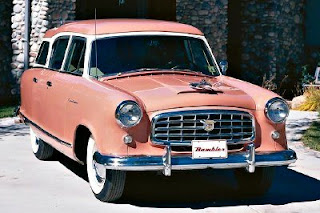 Now:
I remember noise ordinances. I remember boys wanting mufflers that would ‘rack off’. A sound that is sort of pop and rattle after the engine was revved and let the rpms drop.
So I installed a split manifold on my Chevy 6 cylinder. And then it happened, I met the local state police I had heard so much about.  ;-( Officer Burris let me follow him downtown to jail after he caught me. Wasn’t much of a race, he had a 1956 police special and I had a little 1948 6 cylinder Chevy. LOL Some things just gripe me, now there are cars with boom boxes louder than my car was. I think I actually hear cars with NO mufflers on the road. And Hey don’t mention the Motorcycles and noise. Harley even has their sound patented.
It seems the environmentalists have forgotten the NOISE damage. ;-(
My dad’s hearing was going and he drove my car once. The local police knew dad and stopped him. ‘That engine is pretty loud preacher!’  Daddy said he didn’t think it was that loud. Of course they let dad slide.
They tell me now that above 85 decibels music actually becomes ‘noise’.  I can’t imagine the damaged ears from today’s Concerts and churches.
People who love music, and that is their life, can go ‘bonkers’ when they cannot hear the high, high notes and low, low notes.
Year before last a young lady told me that her mother who was a musician in NYC lost the hearing in one ear and had a Cochlear implant.  She had it removed after just a couple months because we implant folk do not hear ‘real’ sounds, but mechanical or duck sounding people. She declared if she could not hear ‘real’ music, she would rather hear none.
Oh, and a side note of hearing. You know us southern folk do not have accents, it is just you westerners, mid west and northern folk. I always enjoyed and loved your accents, but the Cochlear implants ‘ruined that’, HA. You cool guys now sound just like any other duck!

I had to smile yesterday when Yaya said if they were bored, mama/daddy found something for them to do that was not much fun. I think many can relate. LOL.

Nowadays I think they are being more careful about protecting people's hearing. I know if I have earbuds in and am listening to music if I want it higher than it is programmed to I get a little message that having it higher will do damage to my ears. Son used to enjoy playing his car radio loud. I always could hear him coming home, LOL.

Working in the textile mills for years and then one day you had to wear ear plug to much noise, then came the muzzles (I will call them that) to much dust. When I first told my parents, I was working there my mother told me it would kill me. I have outlived all my sibling and I'm now eighty plus. A few years ago a co-worker waited to talk with me after a funeral we both attended he ask me if I had tried getting something from the asbestos claim. I told him no, and he said I should that he had already got five hundred and was expecting more. I told him at my age they would think I was trying to scam them. Take care, Jean.

We were so grateful when the VA acknowledged Tom's hearing loss. The aids have made all the difference in the world, but I can't begin to imagine the distortion and 'duck' noises. Good thing you're a patient man, Jack!
… Not so much Tom and me. There's a smart*** fellow living around here who delights in revving his low-rider when he passes our house, setting off our cars' alarms. Grrrrr!

I have been deaf in my left ear for almost a year now. I am glad to say that since I have stopped caffeine, I have my hearing back and no ear ringing or dizziness. (knock on wood). The docs always said that salt and caffeine was the trigger to my Meniere's and tinnitus. He might have been right on this one. I don't want to have to hear ducks in my future.

You quack me up
Lisa

To be able to hear is a blessing and having that implant is better than nothing, I would think. Never thought about it sounding like a duck. Most amusing...