Last night I had a sweet dream, Home for the Holidays

Memorable Automobile from The Past: 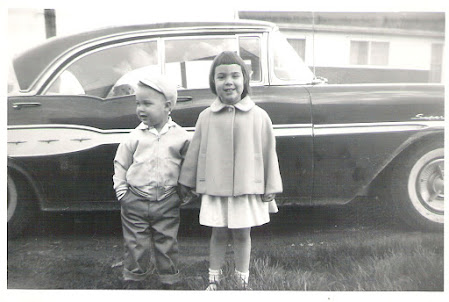 These are Dallas & Marian's first two kids, We remember Peggy, she was born while stationed at Camp Geiger, NC That might be Dal Jr with her. Dal had an older Pontiac in 56 of course.

Remember the many dreams you cannot remember? (Is that contradictory?) LOL

I was never a Fan of music. I do remember a base library just after joining the USN, I was missing my Sherry. For something to do I visited it and put on some head phones. They were playing some piano classics, Beethoven etc.The closest I had been to that was... ‘Roll over Beethoven and tell Tchaikovsky the news!’ ;-) Chuck Berry

I remember thinking I could listen to this forever. BUT I never did it again. My dream was keyed to the song by Perry Como, “ Home for the Holidays”. It must be OUR classic, because we sing one line when we see a Pennsylvania tag. It Is is:

“I met a man who lives in Tennessee and he was headed for Pennsylvania and some homemade Pumpkin Pie! From Pennsylvania folks are traveling down .... etc.." And then we talk of our oldest military friends, Dallas and Marian. They Are Pennsylvanians and that girl can cook. LOL

Funny how people can be anything in a dream. My son Jack Jr was a Highway patrolman. He spotted an old 50s Pontiac stuck in the snow in NC, with a Tennessee tag. He ran it before checking the passengers. It was registered to a Robert Dallas Fletcher, Red Lion, PA. (Anything can be done in a dream, a TN tag with a PA address!)

He then found an OLDER couple hugging to stay warm. “Mr Fletcher?”

“ I ran the plates sir, you two need to get in the backseat of my cruiser, then we can talk.”

In the cruiser, “What are you doing on the road?”

(singing) “Headed for Pennsylvania and some homemade Pumpkin Pie!”

“OK, I am taking you to a place where you might can get some pumpkin pie!”

The Fletchers were leery, it was a long drive and out in the country, “Where are you taking us?”

“AHHH you will see in a minute as he drove up to a Motor home.”

They knocked on the door, and there was Sherry opening the door and screaming, “Marian? How did you get here?” They pointed to a patrol car leaving. I ran out and hugged Dallas. In the dream I had not seen him since 1956. (But in reality we  stay in contact.) 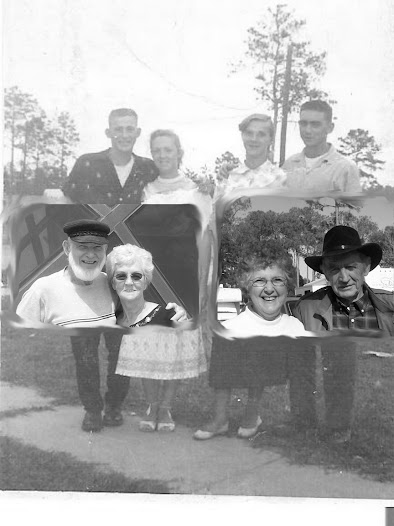 In the dream we explained that our sons had heard their names since they were born. The name FLETCHER was engraved in their memory.

In the dream Son Mark towed their old Pontiac to his body shop and completely restored it. (pretty good in one night) LOL

Jack and Mark drove the Pontiac thru the snow to the MHome and we waved as Marian & Dallas headed for PA, we were all singing that song, "There is no place like Home for the Holidays!!!!"

I cannot recall remembering that much and more of a dream. It was so pleasant. WE did not get to see the Fletchers last year and just received a card saying they would not be in Florida this year. WE will miss them.

Sounds like a new book to me! Hope you an Sherry are having a wonderful Christmas time.

What a great dream for the holidays ! That had to have left you with a warm feeling. Anything can happen ub dreams and sidetones we cab name then cine tree,

Opps that Should have read, sometimes we can make them come true too.Merry Christmas to you both !

I LOVE this!
So often I've DAY-dreamed I could dream about going home again. Like old Bing sang, ".... if only in my dreams."
Happy for you, Jack.

I love that dream, Jack. I often dream about people from the past and sometimes the dreams are so convoluted that I wake up confused. LOL
Have a wonderful, blessed, Christmas- Hugs to you and Sherry- Diana

Interesting dream Jack :) At least it wasn't a nightmare, right?

Nice Dream ! Hope you 2 are having a nice Christmas Eve ! We ZOOMED with the Son out in Oregon, Grand Daughter and Grand Son and Son In Law tonight, Daughter was not home ! Wishing you a Merry Christmas !!!!! Love an Blessings, Gary an Anna Mae