You gotta love this Rock  TRUCK (Borrowed from Connie Walls): 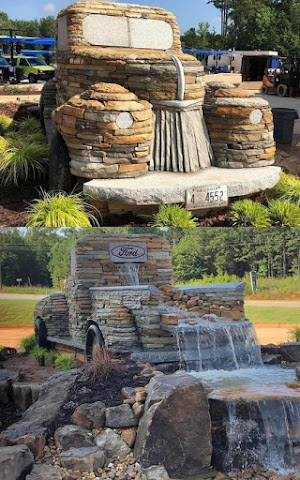 I would love to have that as a yard decoration!!

I am a believer, the USA is the greatest country in this world. I think folks born in Canada, the UK, Ireland, and Germany etc feel the same. BUT this is me.  And for me it is the USA.

Politics, LOL! Funny but serious. Our election was held, The ‘Electoral College' has said that Mr. Biden will be our next president. I didn’t vote for him, but HE WILL BE MY PRESIDENT. WE had many high profile people, say at the last election: “If Trump becomes president I will leave this country!” (Did they?)  Some held signs “Trump is NOT my president,” at inauguration time but he was.

BUT despite that……………… Politics continued.

As a kid I heard “If Ike becomes president, Expect WWIII, ALL HE KNOWS is WAR!

Down south I heard: “If JFK gets in office the USA will be run by the Vatican.”

I heard it very LOUDLY said with disgust, “REAGAN? Yeah that is all we need is an ACTING PRESIDENT!” We have different voices in this country. Thank God we have the right of FREE SPEECH.

I once had a revelation, delivered to me while razing an old house. Using my sledge I smashed into a plaster wall. There in the wall were preserved 1940s newspapers. I had to look at them. Until then I had the impression that everyone loved FDR. HA! BUT in those papers there were Nasty letters to the editor saying how terrible FDR was. He should be impeached! WHAT? That is impossible…… J. Everybody loved the guy. LOL

This election time was NOT TERRIBLE, it was a bump in the road, A BIG ONE, but a bump. WWII, Korea, Vietnam, all wars ARE TERRIBLE. The UNCIVIL WAR was the worst, neighbor against neighbor, surely no one wants that. BECAUSE more AMERICANS died at that time, than in any other war.

We are too diverse for EVERYONE to love any president. My hope is for a statesman that can draw us a little more together. HOPEFULLY it won’t take another 9/11 or Pearl Harbor. ;-(   I honestly hope Biden can do it, if not I will still have HOPE!

There is always ‘next time’, another election in 4 years. We need to remember we are NEIGHBORS! We are not ENEMIES just because we have different beliefs, faiths and ideas.

PS: From Evelyn (or Don)

Gold  is the only metal that doesn't rust, even if it's buried in the ground for thousands of years.

Love this Jack. If I do not like the pres I can always vote the other way next time, and believe me I have. I still think presidents need a bit of charm. Just because someone promises us something to get to the White House doesn't mean they can deliver it. Oh I would love that truck too. LOL Blessings, xoxo, Stay safe. Susie

Jack-I am with you-as an American I support whoever the people elected whether he was my choice or not. I am a conservative so some things rub me the wrong way but we do what we can as Americans to keep our country strong and united. Thanks for this wonderful post. Hugs- Diana

So well said I can't add anything. Patty McDonald

Ouch, Jack. Years ago I made the comment, I could never serve in the Marines (for instance) and salute xxxxx. Son and Tom have patiently explained, they're not saluting the man, but the office. Sorry, but I'm not there yet.

Well written, Jack. You said what many are thinking, myself included.

We live in an unusual time period. It will be looked on with all sorts of opinions.

Are you Georgia? Florida?

I have done so much praying for this election. It wasn't the outcome I wanted but it was the outcome God wanted for whatever His purpose and will. I'm having a hard time with saying Biden will be my president because there are several things on the Democrat platform I strongly oppose (their stand on abortion and their stand on what marriage is). I could not vote for him even if I thought he would be a good president based on those 2 issues which go so much against the Bible. So I'm resolved to pray for the administration and trust God. It will be a wild ride for the next few years. I hope I'm wrong about that.

You are right Jack and if we don't like the president we'll always have another chance to note, It's our honor and privilege as a citizen of this great country. Still it's hard to believe this president is refusing to believe he lost and there will be a new president to lead us.

Whoever is president, they are my president because I am American. I did not vote for Biden and I do not have to support him but I will pray for him just the same.