Leaving earth, by plane, rocket or The Rapture

Beautiful car don't you think. It is a 1920 Cord. We are going to a Birthday party for a beautiful lady who was born that year. She was an expert designer and seamstress, and made dresses for some famous people. She never married but doted over her nieces and nephews. They were privileged to wear some clothes hand crafted by this talented lady. She is referred to lovingly as 'Aunt Nee', We knew her sister another wonderful lady, Eileen, in Missouri. There were three of the Pinder girls and they were very talented singers also. They were well known as a Gospel TRIO! 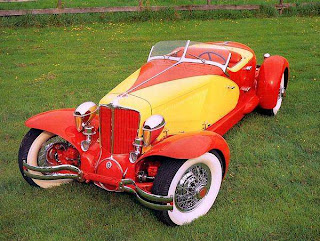 Today is Friday,
WE went to Waffle house for breakfast. Our neighbors are heading East a ways because they say there is a launch coming up. We have watched several launches, they are spectacular. To feel the ground shake as they rev up the engines to head into space. Now you can see much better on TV, but there is something about watching it live. We have watched from several locations. Twice we watched from ten miles south on the beach. Twice we watched from Manatee Hammock Camp ground which is the closest you can get in an RV park. WE were there to see John Glenn go up in the Shuttle. I thought the incident was great. I would love to be in that thing as it rises and loses earth’s gravity. Sherry doesn’t want to go with me. Says that definitely does not yank her chain!
Would you like to go? Sure you would. Of course Sherry doesn’t even want to leave the earth slow in a Balloon. She ain’t crazy about taking off in a Jet plane.
Now she believes in the Rapture, she says she will go in that, if it happens while she is still alive. She declares that is different! I have to agree.
I was raised in church, since my daddy was a preacher. Dad was a wonderful man. He preached on the Rapture of the Church every once in awhile. Funny thing about that. I could see folks just sailing off into the sky when God called. Now I wasn’t a real ‘good’ kid. Not mean mind you, but not real good. So I worried about that. I had a theory. I knew if there was a good person, it was my mama! So I knew if this Rapture took place she would definitely go. When I got really worried I would get close to mom, cause when she started up, I was going to grab her legs and go too.
Later in life I wondered why I didn’t just get close to dad? But then Mom was around the house all the time when I got worried, and she was available for a free ride. I did wonder once or twice, if we were in the house and she started up through the ceiling, attic and roof, if my body could pass the test. I felt better if she was outside washing or something.
Thanks for coming this way
Nite Shipslog
PS:
Report from Kansas:
I live in a semi rural area. We recently had a new neighbor call the local township administrative office to request the removal of the DEER CROSSING sign on our road. The reason: 'Too many deer are being hit by cars out here! I don't think this is a good place for them to be crossing anymore.'
(Something like that is easy to agree with, don’t you think?)
RAISIN: Grape with a sunburn.
SECRET: Something you tell to one person at a time.
SKELETON: A bunch of bones with the person scraped off.
Posted by jack69 at 12:36 PM