We Made It! (It is COLD here, okay Not COLD but colder than I like. 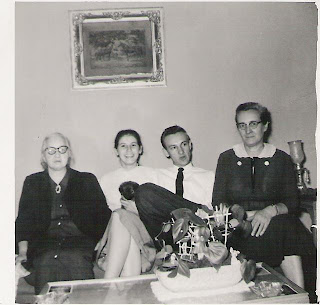 This is Lilly, Rose, Tuck and Lecta (Tuck's Mom), Do you think Tuck looks likd Bobbgvy Darin?
of 'Mack the Knife' fame. Who is Bobby Darin? Who said that?

WE are in NC, in Shirls RV Park. It is rainy and nasty, and going to get cold. Miss that Florida 80degrees & sunshine! Sonny seems to be improving. Thanks for your concern and prayers!
Just to show I can make a short entry. This is it. I don’t have the nerve Lucy has to tear everything down and build it back up. I love to see the blogs that are very decorated and arranged. Some of you amaze me with the ability to add and change things. Amazing how creative you are. One of these days I want to try it. But so far, the side bar is as far as I go.
Shirl shied away from computers for a long time. She used one at work, and had a word processor at home, BUT NO INTERNET!
WE joke about it, but it was true, Jim her husband must have had between 50 & 100 computers and peripherals. When Jim collected, HE COLLECTED! He did not use them all, but had several that he operated. Shirl was determined they would not go to the Computer Man, but to the dump in pieces. She used hammer, screw driver and ‘scissors’to demolished them. Ain’t NOBODY gonna steal Jim’s ID!
Funny, there was a young fellow who was starting a computer repair shop. He had worked on my laptop, so I did know him in passing. I dropped by to see if he wanted any old computers. He was very happy and said SURE I will take all you have got. I said I hope so. After the second big van load, he said that is enough. Hahaha!
Sometimes too many computers can be a pain in the backside!!!
WE are proud of how Shirl has integrated into the twenty first century and has welcomed the net into her house. I did have to explain she cannot give antibiotics to the thing to keep out a virus. Other than that she has got it.
Nite Shipslog. (I tried to make it short)
PS:
ARTISTRY OF INSULTS.
When Insults Had Class (no 4-letter words!!) These glorious insults are from an era when cleverness with words was still valued, before a great portion of the English language got boiled down to 4-letter words, not to mention waving middle fingers.

"Thank you for sending me a copy of your book; I'll waste no time reading it." - Moses Hadas

"He can compress the most words into the smallest idea of any man I know." - Abraham Lincoln

"I didn't attend the funeral, but I sent a nice letter saying I approved of it." - Mark Twain

"He has no enemies, but is intensely disliked by his friends." - Oscar Wilde
Posted by jack69 at 2:29 PM

Glad you made it safely and that things have improved. And now I must ask, Just how cold is it??? Is it 23 degrees aT 3:00 in the afternoon. That is what it is here right now. It can not be that cold there. Now doesn't that make you feel better??? lol Lucy Oh yes , my page is very plain right now, and may stay that way indefinately.

Glad you made it okay. What is going on with our bookshelf? Mine is the same way. I'm glad to hear Sonny is improving.
Stay warm and dry,
Sheila

Glad that you made it ok and glad that Sonny is better. Helen

I remember Bobby Darin but don't remember what he looked like. Glad Shirl accepted internet into her life. Now you must talk Sherry into blogging.

I am so afraid of clicking the wrong thing
on this computer I use a long stick to turn
it on and off and stand as far back as I can.
One of the days I will dress my blog up when I
learn how and get up more nerve.

glad you arrived safe and sound; I like the decorated blogs too but sometimes they take so long to load compared to the "simple" ones. I figure with the time I have for journal reading I can either read a friend's blog or decorate mine; I always seem to want to read my friend's blogs so I think I would get the aware for most ordinary blog on the net....but its a good thing!

I'm glad to hear you made it safe and sound. Hopefully you won't be feeling to cold their however, it's hard for me to feel to sorry for you as it's what I deal with on a regular basis. I so need to move to Florida again!

Glad to hear Sonny is improving, keeping him in my prayers.

Well Jack you might have made it back in time to see some snow, lol. They are saying we might get some flares here in Al. Glad to hear Sonny is doing better. Jean

Ok I think that fixed it for a little while anyway. I'm glad you and Sherry had a safe trip home. I'm sure you're all tired. I'm keeping all of you in my prayers. I'm glad Shirl has ventured out into cyberworld too. Terri tried to put images and other stuff on mine and it wouldn't work on my old computer so mine is just plain Jane.

Glad you made it safe and sound...and can enjoy some colder temps with the rest of us...lol

I am glad Shirl made it in cyberworld as well...I never in my life thought Mom would...but once she bought her computer she was hooked like the rest of us...lol

Hope your having a good week