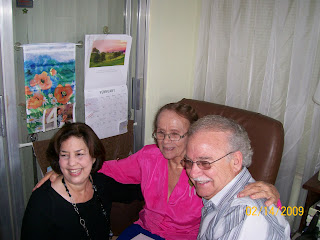 A couple old friends. Bishop BAllard and his wife. His wife was the daughter of Irma's pastor when she was a child. They pastor in Cocoa BEach at present. 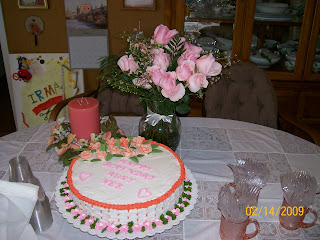 This was the Birthday cake. DElicious! Inside was moist with raspberries inbetween four layers, Wow. There was also a delicious Carrot cake, just love them. It was baked by Carol, Irma's oldest Niece who gave her the name Nee. 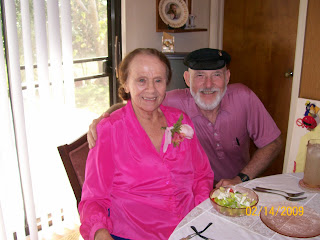 This is Irma Lee, lovingly called Aunt Nee, because her first niece could not say Irma Lee, it came out as Nee. So from then on she is Aunt Nee, an absolutely lovely woman. 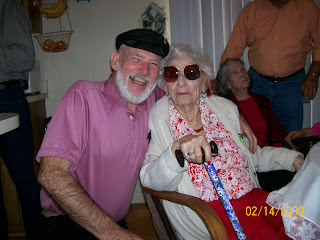 This is my dear friend, and I do not know her name, but I got to kiss her three times. LOL


Hey everyone, thanks for the nice comments and your prayers and thoughts. I will try to get along with my Valentine, now that the cat is out of the bag. She did not like me running my mouth(fingers), I told her I didn’t like being scared myself. Ha!
I do want to say, I do not think it was an anxiety attack Sherry had, even though they diagnosed it as that. She was never excited just as calm as a danged cucumber, I’m leaving you! She has never had anything happen close to that. She promised she would not do it again.
Well, she honestly did not like me putting it on the internet. But she is sweet she forgives me, MOST my sins.
Now for our vacation from our vacation. We had a great time. Met some fantastic folk, kissed a 98 year old lady, told her she was beautiful, started to kiss her on the cheek she would have none of that, right on the smacker. Got to do it again for a picture. She was the life of the party. She looked at me and said “Think I will make it to a 100!” I said you got my vote! She hung her head over to the side lolled her tongue out and said, “Yeah, but I will look like this!”
The Birthday party was for Irma Lee, 89. She has so many friends, Did I tell you she was designer and seamstress for some of the rich and famous. Ms. Como (Yeah, Perry’s wife) was one of her customers.
You should have seen her retirement poster (Of course it was a few years ago, but she still has it in view), It is something like Shirl would do. It was created all with sewing do dads, spools scissors, and measuring tapes. It was great. Glenda asked me to try to take pictures of everyone who came in, I took over 100 pictures.
Such an interesting group of family and friends. A lady who works the Ididarod, a dog sled race in Alaska. Knows Sarah Palin.
Saw Leo again, part of the family. He started working at fourteen building communication tower, built them where I had lived in Missouri. Worked on every building NASA built at the Cape. Installed the first sugar cane mills in South Florida, went to Puerto Rico and brought two back to Florida and installed them.
Not the least of our vacation, was last night in the Motel, no I ain’t telling you a thing, Sherry would really get me. (But boy did I have fun, Sorry honey I had to say that after you scared me and everybody). LOL
Went to church with Don & Evelyn this morning at Melbourne, had lunch, visited and came home to the Motor Home. Don & Evelyn are dong well and will be here in a month or so.
NIte ShipsLog
PS:
Thanks for your concern, but Sherry is all right, I checked everything out.Now I have got to catch up on the Blogs.
Posted by jack69 at 6:35 PM

Sounds as if you know a lot of impressive people. Be careful kissing ladies when you don't know their name. lol

I glad you had a good time at the party. We
sure have seen a lot of very old people lately.
At my party there was a lady 100, 91 and doing
beautiful. I guess there is hope. You are in
a lot of trouble back home after your last entry. You may be able to come home if I can patch things up. I will do what I can.

Tell Sherry you had to tell us...cause we care about her well being too :) So glad she is ok...

Glad ya'll had a wonderful time at the party..that cake looks so good! How sweet of that lady wantin to kiss ya right on the smacker..lol

HAHA@ your fun in the Motel...Sherry is going to get you...LOL Hey afterall it was Valentines

Hope ya'll have a good week...

Payment for Rags is on the way..thanks again!

We would never forgive you if you did not share what happens with Sherry. We have all came to love her as much as we do you, dear Jack. I do know what you were feeling!!! Just glad everything turned out ok. Payment is on the way for Rags. If Joe would just stay quiet until I finnish Sticky I will be done with it today. He is quiet till I sit down and open a book.

Love hearing about your goings on! Why you need a vacation from your vacation is beyond me! Maybe you should just call it a continuation of your vacation! I don't know what sounds better, the raspberry filling or the carrot cake. Too bad I can only eat about 2 bites of them!

Looks and sounds like everyone had a wonderful time at the party. That cake looks yummy and I love carrot cake but Gary doesn't so I never make it. OK you had fun in the Motel and it's none of my business but what book did you take to read? hahahaha! Just joking!
I'm thankful Sherry is doing ok now and from what you described that doesn't sound like it was a panic attack.