The Hand written contract, a thing of the past.

A year ago I took some old records from our lock box at the bank. The box only contains paperwork.  Just last night I ran across them in my drawer here and decided to go thru them. In the building business I have had my name on many deeds for short periods of time. I had several deeds in the stack and I threw them out. ?Then I ran into a jewel that made me smile. A sixty thousand dollar purchase from a nice lady represented by her friend Mr. Bullard. 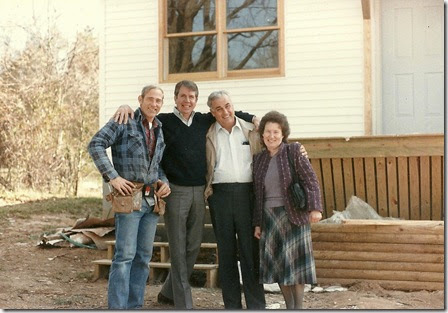 (Me on the left, Jim, Dick and my little sister Kat. Shirl was taking the picture. In front of the first house I ever built. This one I was the only worker from the ground up!)

Mr. Bullard was a nice guy, but every piece of property he sold me, his words were, “I am bringing this to you first.”  I learned later I was usually the third guy he had approached.   I still liked him. The unique thing about this buy was the contract; hand written, and since the owner was financing, the payment schedule was  also in long hand. I watched as it was written using the hood of a car for a desk. The interest was to be 12% and Bullard did the math in his head as he wrote each yearly payment. (I checked it later with a calculator, he was correct). Such an agreement is absolutely unheard of now, and even then it was very unique. 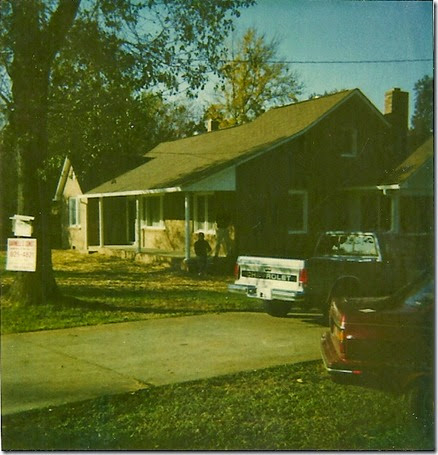 I only  built 5 houses there and just last year sold the rest for less than I paid for it per acre, but we no longer needed it.

I had to laugh at another deed. I bought a small piece of property to build on. My surveyor called me  to tell me I had no problems, but the neighbor did. The property I had bought included a widow’s drive way. “Jack you  don’t need it, why don’t you just give her the driveway, but I suggest you tell her she is responsible for the cost of transfer. I will give her the survey work.”

I said ok, the next day I talked to the lady. She understood (to a point), “I have been using that drive for 50 years, it should be mine.”

“I agree and now it is, but the recording and deed prep by an attorney will cost about $125. That will be your responsibility.”  Reluctantly she said that is fair. I gave her a strip of land 14ft widex300ft.

That night I received a call from her son who said, “14 ft isn’t wide enough”.

Being as nice as I could, I said “The present drive is 10 ft., the value of the strip 14x300 is about $2000. If that isn’t enough land for you, we will just forget it and I will allow her to us my land.  What the next owner will say is another story.”

His answer was, ‘they would take it.’

I had two big smiles, memories from a stack of trash papers, both are honestly good memories, even the last one.

Life has changed, trust must be enforced by an attorney. I have actually built two houses on a handshake.  Times change.

Life is better when you look at the shiny side. 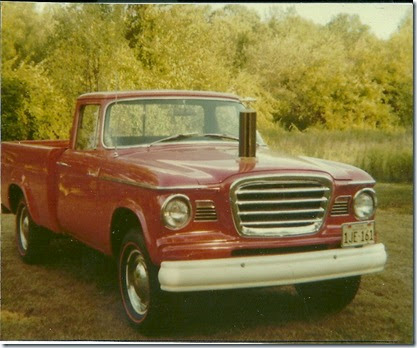 1964 Studebaker Truck that once belonged to Sister Shirl.  Part of her collection

I'm amazed Mr. Bullard could do the calculations in his head!

You are right, Jack, nothing is done with a handshake these days or written by hand. Everything involving attorneys, notaries, etc. Hardly anyone is trusted just by their name alone. Sad.

... what she just said! (LOL)
Ah, the changes we've witnessed - not necessarily for the better. Still, I'm glad they made you smile and want to share with us.

PS - That porch looks like a restful spot on which to loll.

You give them an inch they will take a mile, just the way people are. The son wanting the drive-way wider.

It is a different world, indeed. A nod and a handshake were all you needed back in the day. And trust was built on it. Nowadays nobody trusts anybody.

Yes times have changed Jack.
I love going through old papers and pictures. I get a lot of blog posts from them.
R

A hand shake used to mean something, for sure. Too bad we can't go back to a simpler time and place.

You certainly have wonderful memories in your mind and also on paper!

Times do change don't they - now you don't even sign on paper - it is this silly e-sign which I hate! You can't see what you are signing!!!