Funny or strange to think that students of today will probably never encounter a ‘Carbon Copy’ or wrestle with three thin carbons --- White-out, or even a Xerox Copy?  I read that some kids were shown a couple old phones and could not recognize them. My sons do not have a watch nor camera. 'Life Changes', that's a fact Jack Rick.


Do you remember any direct quotes from your dad or mom? (Other than the one about 'clean underwear!') My dad told me when I left home.  “Son you should always fill-up your gas tank at ½ or greater. You never know when you might have to make an emergency trip in the middle of the night.”


The background of that reasoning: Dad was an old time preacher. Many church members did not have cars. They called him in emergencies. Back then from 9PM to 6AM 'Filling stations' were closed.  Our family was scattered NC, SC and GA.  Therefore A call that grandpa Hilly or Uncle John B was ‘bad-off’ sick or dying required a quick trip. The car should have gas in the tank.


In the 40’s early 50’s the preacher had a phone, even if it was a party line. Ours was the only phone for a couple blocks, many families called or received calls on our phone. I never minded jumping on my bike to go tell Mrs. Thomas or Mr. Hammond they had a call.

My dad was called BF by his peers.  I had a good friend NC Jones.  A guy down the street here in Deltona, is named ‘B’ his wife is 'T'.  I had an Uncle ‘B’. My nephew Ted joined the USMC with a kid named RC. The USMC listed that name officially as R (only) C (only), the Drill Instructor created him a name, Ronly Conly. A name easily remembered is YZ Isaacs. His brother is WX. The letters do not stand for any name, just letters.


YZ later pastored the church Sherry and I organized in New Hope. He retired there. I built a home for YZ years ago. When I took granddaughter Sherece with me she would tell Sherry, “We went to see Wyzeeizee’s (YZ Isaac) house.


I think initial names are neat. There was a time I thought my name was 'N' 'O' NO! 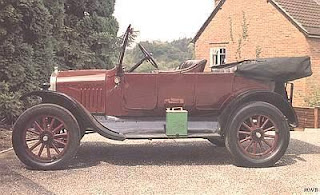 This was known as the "T" model. There was later an "A" model Ford.
There was a famous Z car.

I didn't know anyone that had just initials for their name. It beats some of the names I see these days that parents are naming their kids. Its like they just stream together any letters to come up with the most unusual names I've ever seen. My mom would always say if you go outside with wet hair, you're going to catch a cold.

Hahaha. We have a photo taken about two years ago of our daughter standing and looking confused at a pay phone. Her question, "so how long to you get for a quarter?"

I had a friend who grew up thinking his. Name was Dammit Joe :)

I remember my parents saying to stand up straight and not hunch your shoulders back when I was a teen. I have learned on my own to keep that gas tank halfway full. It does come in handy. My youngest son is fondly nicknamed Bub. No initials for nicknames here but some are pretty funny. Hope you have some sun and warmth there. It's very cold at 14 degrees here this morning and the weather man says with the windchill out there it only feels like 2 degrees. BrrrChill!

I had to delete my comments because I left out a word which is not unusual I am getting there....will try to comment one more time.

A cousin goes by RJ and my youngest brother thought his name was 'Gitwood' til he was 12. It's funny still. My Grams always said to plant my garden in a full moon but the one I live by is Use it or loose it but don't abuse it...she said it all the time about all our bad joints. Dad would say to put my head in the flank of my milk cow and she wouldn't kick me. It worked. And he'd say, You're never too tired to go to church on Sunday. so we did.
Love n' hugs from up north where it's still below zero with wind chill to minus -33 degrees tonight...now that's bitter

This cracks me up!
My mother was one of those, "If the gas tank's half full, that means it's half EMPTY!" I'm not QUITE as bad as Tom, but I grow nervous at 3/4's.

My g'ma in Minnesota had a 'party' line. How cross she'd become, discovering I was grabbing at the phone every time it rang ... and yes, covering the mouthpiece. Heck, back in the early 60's we kids had to invent our own fun.

i used to go by the first two intials of my first and middle name. i am also quite familar with carbon copies. used to be in charge of the copy machine when i volunteered at my daughters school years ago.

John laughs at me for keeping my tank half full of gas. I remember a trip from San Antonio to Cedar Park in the middle of the night when I was thankful my gas tank was full. We had a neighbor growing up named T.P. Miller. Everyone called him Tippy. When he went into the service they insisted he had to have a real name so he named himself Thomas Preston.

Oh forgot to say my daughter said her husband ask why about something and she told him Cat For To Make Kitten Britches. He ask her what that meant. She said she didn't know I always said that. She ask me what that means and where did I get it. I said my Mama used to say it. She was from Oklahoma.

The phrase Cat's fur to make kitten britches is a joking nonsense reply to the question "What for?" or "What's that for?" It's a pun on the words for and fur, which are often pronounced identically.

Rick's dad only has initials... R.E. His Mom usually calls him Ree. Some call him Shorty. My grandad Otis B was also called O.B. Take care, Sheila