To add the bathroom I will have to replace some wiring and move light switches, but the big thing was to cut the concrete block and that was one dusty job. The objective was to keep as much dust down as possible. I built plastic enclosures on both sides of the wall. 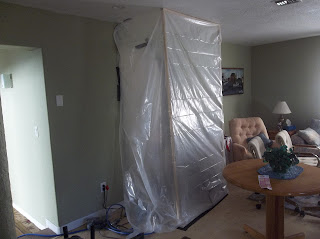 Inside the plastic enclosure Mark came up to help. He saw the plastic shields and called out. "The boy in the bubble". 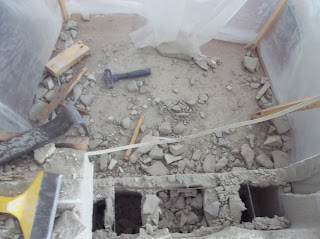 I am sure you wouldn't want this mess in your house. Sherry loves me and puts up with endures my crazy ideas. If you can see that white diagonal line, it is the power to an outlet in the bedroom I had to re-route. 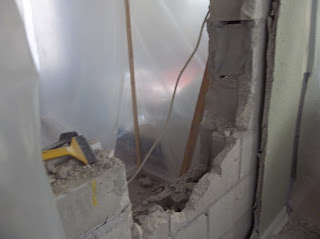 The wall is on its way out and making room for a door. Notice the plaster on the right over the block. Without the plaster it would have been much easier.


Come spring we might move in.  Then soon afterward go on vacation, maybe to Pennsylvania. We do not want to wear our new house out. LOL

WE love the Lancaster area and would love to be there when the corn crop comes in.  No better eating than fresh corn on the cob. Also some great history, friends and just plain folk live in PA! We usually go thru Gettysburg and I almost cry at the causalities are remembered. Then an inner fury toward the stupid arrogance of politicians who created the great UNcivil war. 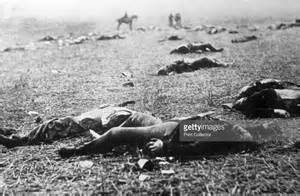 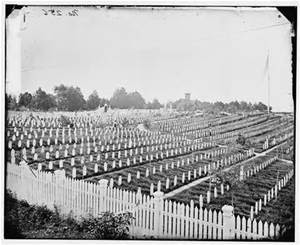 America lost 51,000 soldiers in three days.  Do you realize that is almost as many men that we sacrificed in the many years of war in Vietnam?  Sickening!

The sheer waste of American lives, did you know that almost more Americans were killed in that war than all the other wars combined, and we killed each other. When I hear men from the north bragging, “We could do it again.” And someone from the South who declares “The South will Rise again.”  I shake my head at the ignorance.  Family against family. 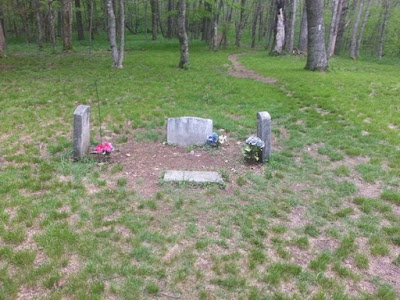 When we hiked the Appalachian Trail, and reached area of Devil’s Gap in Madison County, NC we saw the graves of William and David Shelton.  Uncle and nephew who enlisted in the Union Army and were on their way home thru the Mts to a family reunion. Millard Haire who was 13 years old was also killed. They were ambushed and killed by the Confederates. WE stood there remembering that was an uncivil war between families, and friends at times.

Boy, did I stay on subject or what?

You know how to do about everything, don't you? Lucky for Sherry. Melvin was that way except he didn't like electronics. Cars were getting harder to work on when he passed.

Some things are more important than staying on subject.

I can imagine all the dust and am glad you thought to put up a barrier to block it. Nice to have some travel plans in the future. It's a pretty part of the country to visit for sure and since you have friends there it makes it even more enjoyable.

My goodness ... Sherry's a saint!
In all seriousness, I'm envious of your ability to look at something and imagine "What else could this be?" I'm reminded of that Bonnie Raitt song, "Let's Give Them Something to Talk About." (Your neighbors, that is.... hee-hee.)

Bill is so much like you, knowing how to do it all. It's a blessing not to have to pay carpenters, plumbers, electricians, even the concrete stuff. I know all about making plastic barriers...we had to do that this spring raising the kitchen ceiling and replacing the roof. My ceiling was the stars for a while. Get after it, Jack of all trades.
and YES, so sad about our own fighting one another. I cannot imagine the gut-wrenching feeling for family fighting family.
BlessYourHearts from up north where the Arctic Blast has passed and the air is so much warmer in the teens today. A regular heat wave. Hug yourselves for me.

What a mess Jack. But I know its gonna look great once you finish. I chuckled with. "The boy in the bubble".
Off subject? Yea, I was in the bubble then you lost me in Lancaster somewhere.