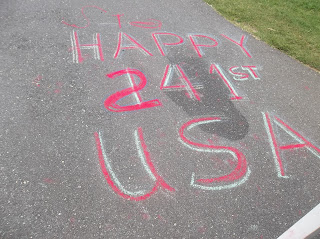 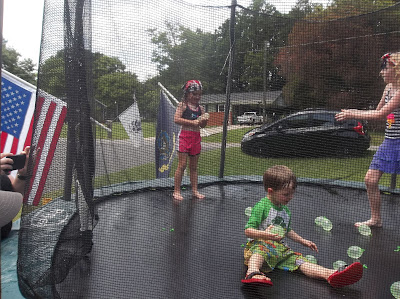 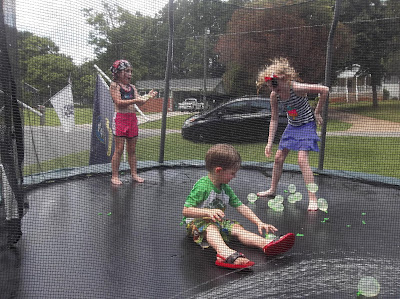 We had a great time the kids on the trampoline and water slide. 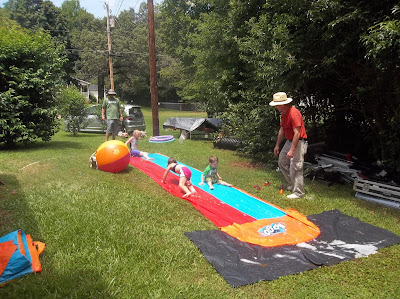 I cooked steak kabobs, Hot dogs, hamburgers and steaks. All in all, we had a wonderful day. 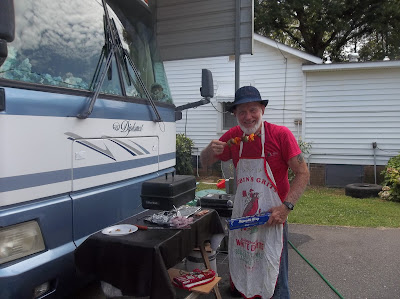 Even Janie got patriotic: 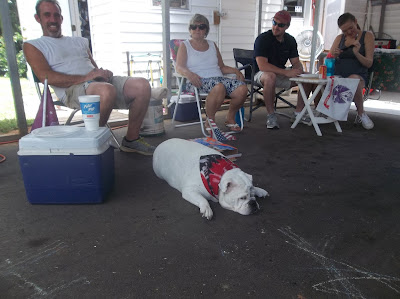 I have moved two heavy pigs around for years. Since Ben and Elsie were out, and the pigs had been for the GRANDS, I decided to kill them and give the change to the greats. Together the pigs weighed about 45 pounds. 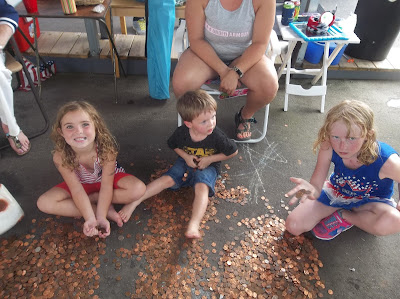 EAch great grand had three 20 oz cups of change, mostly pennies.
We ended with a fireworks display. Shirl and I were talking with our backs to the fireworks and were pretty shocked when with out a warning, the first BOOM went off.  But after that it went well. The kids enjoyed the Fireworks OF COURSE!
Nite Shipslog 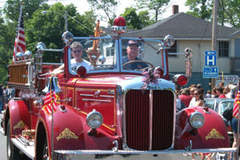 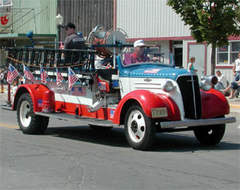 Looked like such a fun day! Who could resist a trampoline or water slide? Took me a while to figure out the pigs you were hauling around but then realized piggy banks! I bet the great grands loved the treasures they were able to take home with them! Your barbecued efforts sounded delicious too!

LOOKS LIKE A GRAND TIME THERE. NUMBER TWO ABOUT THE COWS GOT MY ATTENTION.

Now this looks like a fun day. I giggled when I read you were called out by the grands. You could have played it off as a history lesson. Haha. You look spiffy in the apron!

Back to work
Lisa

Glad you had such a great 4th! Looks like lots of fun for all !

A good time was had by all. The Kids had fun when you emptied the piggy bank
with all those pennies. It will be interesting to find out how many dollars they will get when taken to the bank..The cups were heavy when they were full.
I agree it is a lot of work getting everything together don't blame you it is time for the young one to start giving the parties.

As I say Jack. There are three kinds of people in this world. Those who are good with numbers and those who aren't.
R

What's better than a water slide? Janie in a bandana! :)

That's such a novel idea to sacrifice the piggy banks! Your expression at the grill is priceless. No-man can put a price tag on that sort of an afternoon.

Looks like a Good time was had by all, I have some gallon wine jugs full of pennies, gotta go thru them someday but will probably just give them to the Grandson ! I thank you for your Service to this Great Country of Ours, Glad you are all doing well, Love to the both of you, Gary and Anna Mae !

What a fine host and hostess you two were for your family. Love the ' Grand ' gesture with the piggy bank load. Your grandloves will always remember this 4th of July celebration. We spent our day at the farm, Bill helped make hay and I helped do the cooking for a crew of 15. We listened to the fireworks from the house when we got home, exhausted. But, thank God for our freedom and thank you!
love n' hugs from up north......88 today and rising. Thunderstorms tomorrow so we get a day off. Phew!